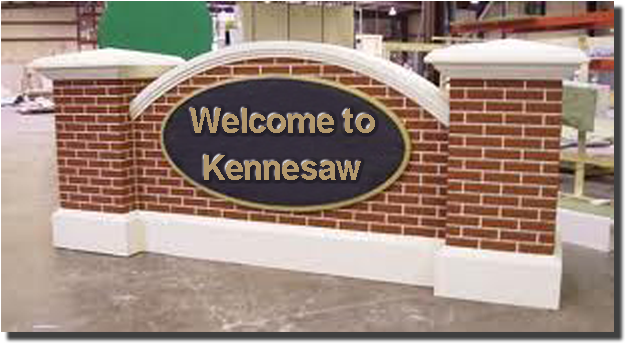 Back in 2012, I wrote an article highlighting the effect of the city of Kennesaw, Georgia’s mandate that all homeowners own a gun. In doing so, it was clear the positive impact that mandate had on the community, not only in seeing a tremendous reduction in crime, but led to Kennesaw being declared one of Family Circle’s “10 best towns for families.” That may change in the near future due to the City Council bowing to Islamic supremacism.

City Council officials in Kennesaw, Georgia, voted to approve the opening of a mosque in a local shopping center, despite some opposition from local residents, after supporters threatened to sue the city for violating their religious freedom rights.

The proposal passed by a vote of 5-0, reversing a 4-1 decision against the mosque that was made in early December.

Originally, the council argued that approving the land use permit sought by the Suffa Dawat Center could create serious traffic concerns at the shopping center in question, and that zoning regulations prohibited the construction of religious buildings, Reuters reported.

Traffic concerns? How about jihad concerns?

Kennesaw Mayor Mark Mathews said that the decision to change votes to approve the mosque didn’t come from input from the public or anyone else, but rather was legal advice from the city attorney.

Carlene Fregeolle of Kennesaw didn’t believe that the concerns of the council changed so quickly about traffic concerns without outside pressure.

“They said they’re expecting about 80 children on Sundays. So, again, no worries about traffic and parking issues? Really? We’re now talking kids and lots of them,” Fregeolle said.

“Everything was done behind the scenes,” Fregeolle added. “If they don’t get their way they sue. Our city council is afraid to stand behind their own zoning laws.”

The Suffa Dawat Center had said they wanted to use the strip mall as a temporary location for their meeting place till they were able to construct a more permanent location.

Ms. Fregeolle, who lives close to the strip mall, said that the Muslims had lied (not shock there) about what she thought of the new mosque.

“They told the council I wouldn’t mind,” she said. “Again, that is false information. … By your flip-flopping you have made the city even more vulnerable.”

According to WSBTV, “A complaint was filed with the U.S. Justice Department. Now, those council members who voted no say they approve, citing just a newly adopted vision statement focused on creating a welcoming environment and a more inclusive city.”

So the mayor would have us believe that no one pressured them into doing what they did, but a complaint was filed with the Obama Justice Department, which has no authority in this matter at all, and voila! The city council changes their tune.

Hamas-CAIR, labeled a terrorist group by the United Arab Emirates, backed the Suffa Dawat Center. There is no question in this author’s mind that Hamas-CAIR is the very organization that helped file the complaint with their partners in crime at the Obama DOJ.

Yet, Randall Bentley, the city attorney for Kennesaw, said that the DOJ had not threatened the city with a lawsuit.

One would have to read between the lines since the Obama DOJ has made several threats about those who would speak out against Islam on social media may face prosecution and imprisonment. Why would one expect them to change their tune when it comes to an issue like this?

However, City Council member Debra Williams, who previously voted against the mosque and changed her vote a second time around, said that the council had previously denied a night club due to “traffic, noise and parking.” She indicated that those wanting to put the club in were willing to do whatever it took to keep the place as quiet as possible, including installing sound-proof walls. “They should sue our pants off,” she said.

She also makes clear that even if there was not a threat of a lawsuit from the DOJ yet, she knew they were aware of the situation and would more than likely bring one.

In the end, Williams said it all came down to costs of a potential lawsuit, not necessarily what was best for the people of Kennesaw.

What should happen is that if the City Council is concerned about the Obama DOJ threatening a lawsuit, they should publicly state that they will ignore the lawsuit, based on the First and Tenth Amendments, and not put any resources into fighting it. Then they should dare the federal government to come and enforce what they think they have the authority to enforce and let the chips fall where they will. Otherwise, this is simple cowardice on the part of the City Council.

My guess is that the night club that previously asked for the facility is going to file a lawsuit and the costs are going to be there for the city of Kennesaw anyway, only now, Kennesaw has bowed to Islamic supremacism.

To add insult to injury, Khalid Hashmi said, “I think we have achieved success for the whole community including those who oppose us.”

Then Samir Malik added, “The Bible says love thy neighbor. Our religion teaches love your neighbor.”

But, Muslims believe the Bible has been corrupted. See the insult?

Capt. Linc Doberman of the Georgia Security Force said that he believes Islam is much more than a religion, and as a result of that thinking believes it should not be treated as a religion.

“The imams in the mosques are all striving towards the establishment of a caliphate and you can’t have a constitutional republic along with a caliphate,” he told WND. “So you can allow it to continue creeping in, until you feel the deep, red welts of domination.”

In this writer’s opinion, Kennesaw needs to evaluate their mayor and council members in the coming election and anyone running for office in the city should be pressed to be fully in opposition to Islam. A City Council that caves to political pressure from Islamists is not your friend. I know, that’s asking a lot in our politically correct environment, but it is necessary if the people of Kennesaw are serious about stopping the spread of Islam in their community. After all, you have the power to stop Islam in its tracks.