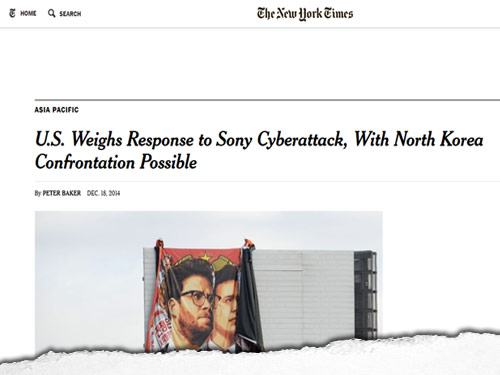 Hey government and mainstream, lapdog establishment media: I thought we were supposed to be afraid of ISIS… Now it’s North Korea?

What a ridiculous reality we live in.

Right now the mainstream media is flooding the news cycle with story after story trying to rile people up about how the FBI has officially blamed North Korea for the Sony hack which led to the company canceling its scheduled release of the upcoming Seth Rogan movie “The Interview,” ostensibly to avoid terror attacks at theaters.

Yesterday The New York Times ran a story titled, “U.S. Weighs Response to Sony Cyberattack, With North Korea Confrontation Possible.” Voice of America, one of our government’s more openly official propaganda arms, ran with the headline, “US: Sony Cyberattack is ‘Serious’ National Security Matter.” I saw the headline on VOA and went, “Uh-huh. Suuuuuuure it is.”

The Telegraph is even saying China helped.

And it’s official: the mainstream media sound like a bunch of children stomping around flailing their arms, “Look over here, look over here!! Pay attention to me, dammit!” for a story that most people aren’t even sure they should waste eyeball juice on.

At the same time, alternative media outlets are rightfully calling this whole thing what it very likely is: a U.S. intelligence operation, and a huge (and frankly ridiculous) distraction.

Two family members have individually asked me now what I personally think of the Sony/North Korea story. My first response when I saw the headlines prior to the ridiculousfest blowing up the last few days was a yawn and a stretch. My response today, however, when they asked was more along the lines of *insert mind-melting scream here* akin to the sound of a rabid ninja camel fist-fighting a giant zombie anteater on crack with lightning bolts for eyes.

So people are actually buying this crap? Really?!

“It’s all sleight of hand… Look over here [while we do this over here.] People are fed up with this crap!” Mike Baysek agreed when I said I thought the media was stomping around like a bunch of children who want attention. He continued, “This is almost as stupid as that fake movie the CIA put out about Mohammed a couple years ago.”

Kevin Pick wrote, “It’s really surprising to me how many people believe N Korea did it with zero evidence whatsoever.” I know Kevin. It somehow still manages to surprise me, too.

Thomas B. chimed in with, “First off, I’m surprised they didn’t blame it on Iran and secondly, you’re spot on, this is mind pablum to distract. Absent of Kardashian’s ass redux, feast on the NK psy-op for now.”

I responded with, “Kim Kardashian’s ass is a more believable distraction story…and that’s saying a lot.”

Apparently ten people on Twitter agree with me…(at least at the time of posting this article not too long after I posted the Tweet).

On top of everything else, they are going so far now as Paramount canceling the make-up showing of Team America: World Police, which, if you’ve seen the comedy put out by the guys behind the hit cartoon South Park, involves lampooning both America, North Korea, and the whole War on Terror in a pretty direct way.

Because scary North Korea and terror and stuff.

Of the decision to pull it, Gizmodo wrote, “Paramount Cancels Team America Screenings Because Everyone’s a Coward“:

Terrorist threats are no laughing matter, of course, but the Department of Homeland Security has found no credible threat, and evidence that the Guardians of Peace have any sort of manpower that could do anything within the boundaries of the United States (much less at thousands of locations simultaneously) is practically non-existent. This sort of panicked cowardice would be absurd if it wasn’t so damn sad.

At least the Alamo Draft House chain has big enough sense of humor to laugh at this ridiculousness in the first place.

I think it’s even worse than everyone being a coward, though. I think it’s just one more piece of propaganda pie to shove down the throats of the American public today that we should all be shaking in our boots scared of…North Korea. (Again, really?)

North Korea is like the ghost in a sheet with holes cut out for the eyes that they pull out of the basement as a wild card when they’ve got nothing else new going on to scare people with.

It goes something like, “Ooh, you know, we need a distraction for the fact that other really important stuff that actually directly impacts the lives of every American is going on right now…Let’s see.” (Pulls out Magic Book of Psyops and False Flaggishness.) “Ah! We haven’t had a fake North Korea threat in a while…better get on that.”

While all this is taking center stage in the foreground and everyone is pointing and staring at it cooing, “Ooh, look, shiny things!” do you know what’s actually going on in the background?

Aside from the fact that the police state in America has gotten to a 1984 thought crime/Minority Report pre-crime level, with our militarized and soon-to-be federalized police force assigning each of us a color-coded threat level based on all of our data including our social media posts, the economy is still floating around on magic fairy farts that are bound to run out sometime, and Obama just quietly announced sanctions on Russia’s Crimea, once again poking the bear with a pointed stick and trying to provoke the cold war into a hot one.

You know, you could do a nicer thing for your brain by just taking a nap; it’d serve you and your brain cells much better than reading and believing the fat bag of North Korean distraction propaganda being dumped out in the mainstream media cycle.

I think I’m going to go do that now actually.