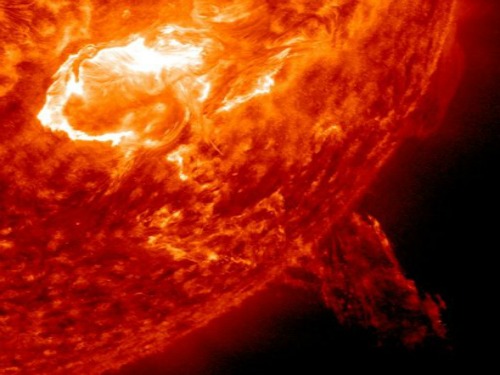 Sunspot AR2242 erupted Saturday 20th December at 00.27 UT producing an intense X1.8 flare. The picture above, taken by NASA shows debris shooting out from the site of the blast.

The position of AR2242 on the sun disc means that any CME produced is very likely going to be Earth-directed. Radio emissions from the shock waves do suggest a CME is on its way and if that’s the case the huge solar cloud will reach us in 2-3 days.

There has already been one Earth-effect: Extreme UV radiation from the flare ionized our planet’s upper atmosphere and blacked out HF radio communications over Australia and the South Pacific. Below 10 MHz, transmissions were strongly attenuated for more than two hours. Stay tuned for updates.

NOAA estimates the chance of further flares over the next 24 hours to be 75% for M-class and 25% for X-class.