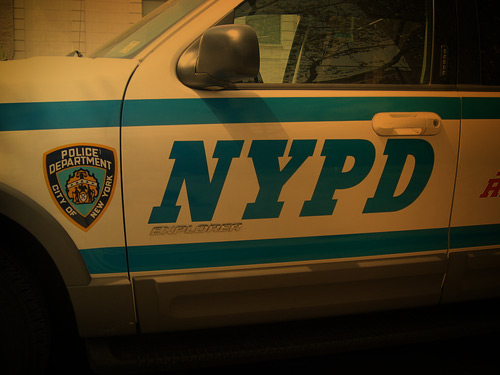 The New York Police Department has declared “war” after two officers were killed Saturday in their squad car while taking part in an anti-terrorism drill by a gunman said to be taking revenge for the death of Eric Garner.

The accused Ismaaiyl Brinsley, who reportedly took his own life after the killings, is said to be connected to the Black Guerilla Family prison gang, who police recently warned were gunning for police.

Saying “There’s blood on many hands,” the head of the NYPD’s police union, Patrick Lynch, placed much of the blame on the Mayor’s Office and formally asked Mayor Bill de Blasio not to attend the funerals of the slain officers for appearing overly sympathetic to Eric Garner protests.

“Those that incited violence on this street under the guise of protest, that tried to tear down what New York City police officers did everyday… We tried to warn it must not go on, it cannot be tolerated. That blood on the hands starts on the steps of city hall in the office of the mayor.”

Police turned their backs on Mayor de Blasio as they gathered to show respects for Officers Rafael Ramos and Wenjian Liu outside the hospital where they were pronounced dead. When De Blasio stated, “We’re all in this together,” one officer was heard retorting, “No, we’re not.”

It has been an edgy couple of months here in Police State USSA, with the fallout of Ferguson after the Michael Brown shooting, followed by Eric Garner’s death at the hands of NYPD for selling untaxed cigarettes and the shooting of 12-year-old Tamir Rice in Cleveland for playing with a BB gun in a public park.

In the wake of the shootings, the NYPD’s union New York Patrolmen’s Benevolent Association issued this bulletin showing that the NYPD are most certainly not taking things lightly:

“Starting IMMEDIATELY: At least two units are to respond to EVERY call, no matter the condition or severity, no matter what type of job is pending, or what the opinion of the patrol supervisor happens to be.

“IN ADDITION: Absolutely NO enforcement action in the form of arrests and or summonses is to be taken unless absolutely necessary and an individual MUST be placed under arrest.

“These are precautions that were taken in the 1970′s when police officers were ambushed and executed on a regular basis.

“The mayor’s hands are literally dripping with our blood because of his words actions and policies and we have, for the first time in a number of years, become a ‘wartime’ police department. We will act accordingly.” (emphasis added)

Well, Michael Bloomberg did say the NYPD was his own “army” back when he was mayor.

On a side note (which really shouldn’t be the side note here), what exactly do they mean by “Absolutely NO enforcement action in the form of arrests and or summonses is to be taken unless absolutely necessary and an individual MUST be placed under arrest.”

Are they admitting openly what we already know? That not all enforcement actions and arrests are “absolutely necessary” to begin with?

It’s too bad we live in a country where that isn’t the rule all the time. Unless I’m mistaken, I thought it was supposed to be. Why isn’t it??

Of course we know it isn’t.

We live in a total police state where a man can lose his life for the cost of a rapid transit train ticket, a movie ticket or selling loose cigarettes on a street corner. In fact, while only 31 officers were shot in the line of duty in 2013, no one even really knows how many people are shot by police in this country each year.