“They were quite simply assassinated, targeted for their uniforms.”
– NYC Police Commissioner Bill Bratton

And so it has happened yet again…another black thug takes to the street to deliberately cause mayhem but this time it’s two NYC police officers who lay dead. Both were shot point blank in the head in an execution style daylight ambush while sitting in their patrol car eating lunch after completing a ‘critical response’ detail in the predominately black Bedford-Stuyvesant (‘Bed-Stuy’) section of Brooklyn… translation: black thug heaven.

And as two of the racist white-hating trio of Barack HUSSEIN Obama, Al Sharpton, and Eric Holder remain, for the most part, silent, it’s third member AG Eric Holder who issued an obviously written for him statement condemning the shooting…“I condemn this afternoon’s senseless shooting of two New York City police officers in the strongest possible terms”…but daring NOT to condemn the black shooter himself. And so the trio’s self-instigated race war has now truly begun, and it’s black thugs vs. the police who bring the battle to the forefront.

“I’m putting wings on pigs today…They take 1 of ours…Let’s take 2 of theirs,” the post said, and the killer signed off by saying, “This may be my final post.”

Early Saturday morning in Baltimore, 28-year old Ismaaiyl Abdullah Brinsley shot and seriously wounded his ex-girlfriend in the stomach, then got into his car and drove to NYC specifically looking to kill cops as witnessed by the above words posted on his ex-girlfriend’s recent, but now taken down, Instagram message page…words posted along with the vile hashtags: #ShootThePolice… #RIPErivGarner… #RIPMike Brown…just three hours before he murdered the officers. And this thug was known to the police in Ohio where he had four arrests, and especially in his hometown of Atlanta, Georgia where he was arrested 15 times for crimes that included possession of marijuana, shoplifting, simple battery, grand larceny, and are you ready for this…making terrorist threats. 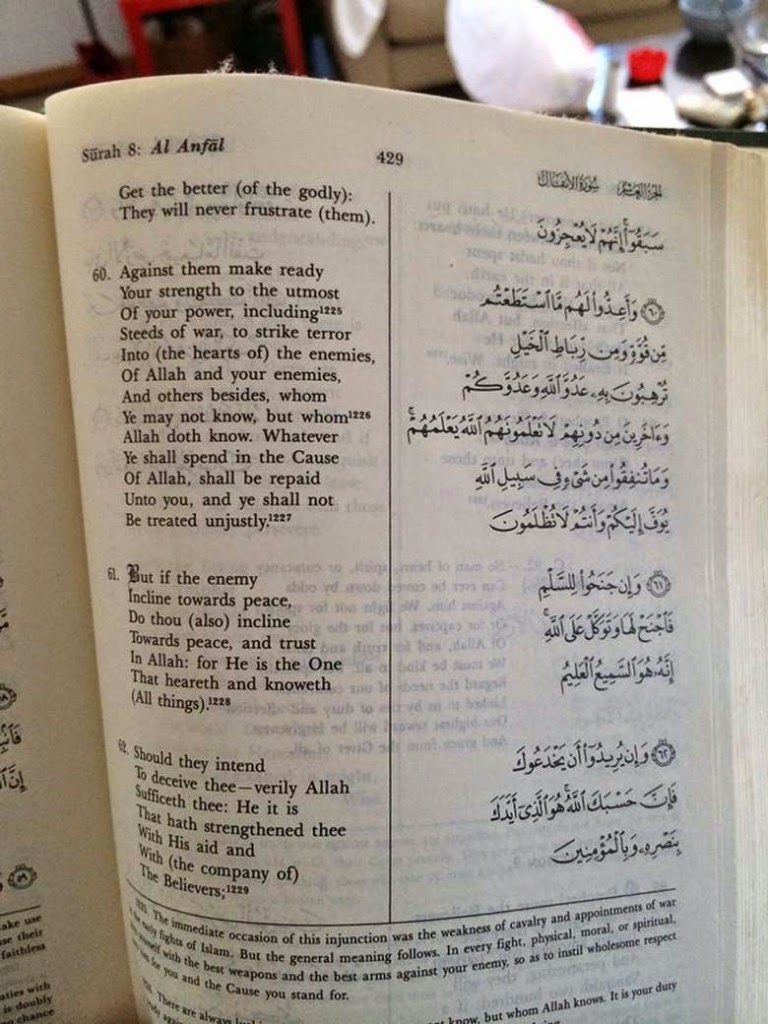 Ismaaiyl Abdullah Brinsley…who had Sura 8 (the muslim preparation to kill) displayed on his now taken down FB page and who spoke Arabic…was either a practicing muslim (he was raised in a muslim family) or at the very least a die-hard muslim sympathizer. A fan of radical sheikh Yusuf Estes…who is part of the hierarchy of the Da’wa movement (the call to islam) and a supporter of ISIS as well as of Hamas, the terrorist group who had a hand in the Ferguson riots…Da’wa is the very group Obama’s brother Malik is the secretary of…the very anything but charity group Lois Lerner herself gave 501 (C) (3) status to…on Obama’s orders perhaps.

And Brinsley used the increasing Obama initiated racial tensions in today’s America as his excuse to kill the two officers…something the media wants kept hidden at all costs…that along with the fact that almost all media reports still will NOT say that Brinsley was BLACK. So I’ll say it and say it for all to hear or should I say read…the murderer of the two non-BLACK NYC police officers was BLACK…BLACK of the thug variety…BLACK of the muslim variety…yet one they merely call a ‘deranged’ gang member. And the media refuses to report the truth about him because BLACK on white (non-BLACK) crime does NOT sell papers or drive up ratings in the way white (non-BLACK) on BLACK crime does. And lest we forget that the media refuses to utter the ‘M’ word so as NOT to upset the sensibilities of yet (I believe) another BLACK muslim thug…the one occupying the White House…you dear reader know that as truth as well as do I.

Yet another in a long list of BLACK muslim thugs and probably the reason why Obama has NOT rushed to his teleprompter for yet another photo-op like he did after the Garner grand jury’s NO indictment decision against Officer Daniel Pantaleo was announced…like he did to damn the Ferguson police department after Michael Brown was (rightfully) shot and killed…like he did when he declared, “If I had a son he would look like Trayvon Martin“ during the George Zimmerman trial. But of course he’s NOT, after all the killer was one of his ‘bros’…a BLACK man and possibly a fellow muslim to boot. And little does he care when a racist BLACK murders non-BLACK ‘so-called’ pigs…pigs of the variety that the white-hating trio claim love to do NOTHING better than to racially profile and harass young BLACK men simply because they are BLACK while ignoring the fact that it’s their BLACK bros who commit most of this country’s violent crimes.

And much to the horror of those who witnessed this assassination outside 98 Tompkins Avenue, this piece of human garbage ran hard and ran fast…like all cowards do…after shooting the officers. Brinsley then took his own life after rushing to the platform of the Myrtle-Willoughby Avenue G-subway station by putting a bullet to his head. At least he saved the taxpayers the expense of having to house him in a cushy jail cell for years as he awaited trial for first degree murder and most likely a sentence of death…that is unless white-hater and cop-killer lover AG Eric Holder would have taken that sentence off the table as he has done so many other times for BLACKS who kill cops…for BLACKS who kill non-BLACKS.

And this, the first death of police officers by gunfire in NYC in three years, comes at a time when police in NYC and across the nation are the targets of demonstrations against them. So can one blame them for turning their backs on NYC’s ubber liberal socialist mayor, Bill de Blasio, who had the nerve to say this is NOT the time to explore the political ramifications of what happened. Hate to tell him but now is exactly that time for New York’s finest have bore the burden of de Blasio’ ire as he and police officers union president Patrick Lynch have been butting heads over his shameful treatment of officers following the grand jury’s decision NOT to indict the officer in habitual criminal Eric Garner’s death. In fact, just a few days ago, Lynch started circulating a petition that demanded the mayor NOT attend their funerals should they die on the job for this mayor sides NOT with the police but with those out to defame, dishonor, and kill them.

The two officers murdered by this BLACK thug were Wenjian Liu who was of Asian heritage and Rafael Ramos who was of Hispanic heritage. Liu, 32, was a seven-year veteran of the force and had married just two months ago, and Ramos, who had just turned 40, had been on the job for two years after having been a school safety officer. The two officers were usually assigned to South Brooklyn, but were in ‘Bed-Stuy’ Saturday working as part of an above said ‘critical response’ detail in a BLACK area with high crime rates…in other words they were there to help protect the citizens of the area from the very ones like the one who killed them.

“We have two dead police officers, and I guess Al Sharpton got what he wanted,” retired NYPD detective Harry Houck said. And how right he is as in addition to the bast*rd Ismaaiyl Abdullah Brimsley who actually pulled the trigger, I believe the deaths of these two officers would most likely NOT have happened if NOT for these three persons…the first being race-baiting white-hating anything but ‘Reverend’ Al Sharpton. This miserable excuse of a man has continuously taken it upon himself to butt into affairs where he does NOT belong solely to capitalize on tragedy to line his own pockets as he self-promotes himself at the expense of his fellow blacks. And if he had NOT provoked and encouraged an anti-police mentality along with inciting violence and murder in the aftermath of the deaths of Michael Brown and Eric Garner those two officers would most likely be home with their families tonight.

And the second person with ‘blood on their hands’ is NYC Mayor Bill de Blasio for this vile man had the audacity to outwardly and publicly stand in support of the protesters marching in opposition to the grand jury’s decision…protesters who continuously yelled “all we want is dead cops”…instead of standing strong and united with his city’s police department as well as accepting and honoring the grand jury’s decision. And for those reasons, let alone for the fact that those actions helped to encourage this current anti-cop racist mentality, this man should be removed from office…either voluntarily by stepping down or through the legal process. In fact, some officers have called for a ‘NO return to work’ order until de Blasio is removed from office. 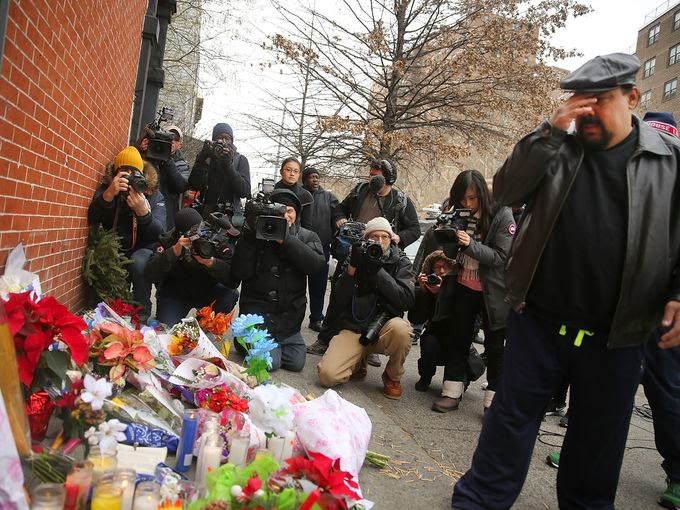 And the last person who is to blame NOT only for the death of the two officers but also for all the hate and violence that seems sadly to be today’s new norm is none other than first degree white-hater…Mr.”‘Stay the Course“ himself…Barack HUSSEIN Obama for this man’s actions have single-handily set race relations in our country back at least 50 years. A muslim by birth…a muslim by actions…this most vile of the vile wants to fundamentally change our country…hell he said so himself…NOT just into a socialist nation but add our nation into the 57 islamic states already (sarcastically said) in the islamic caliphate. And if he is NOT stopped he might just accomplish that in the last two years of a presidency run amok if Congress does NOT stop him, his pen, and his phone.

So with the murders of these two officers…and with word now hitting the air that Florida law enforcement 17-year veteran and former NYPD officer Charles “Charlie K” Kondek, 45, being fatally shot early Sunday morning in the line of duty in Tarpon Springs…the lines have been drawn for we either stand with the police or we stand with the thugs. And I for one will proudly stand united with the police against the thugs, their handlers, and their keepers who are out to destroy our beloved America from within.

Rest in Peace Officer Liu and Officer Ramos…you will NOT be forgotten.