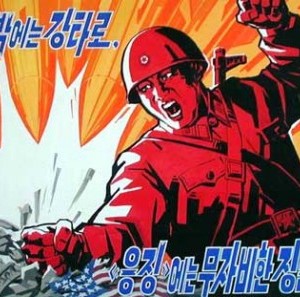 In addition to all of our wars in the Middle East and the war that has erupted on the streets of America, we are now engaged in a cyber war with North Korea and an economic war with Russia.  Without a doubt, the United States has the capability to do a tremendous amount of damage to both of them.  But what about the damage that they could potentially do to us?  We have a society that is absolutely teeming with soft targets.  Our Internet infrastructure is extremely vulnerable, our debt-based economic system is already teetering on the edge of disaster, and government officials freely admit that security at key facilities such as power plants is sorely lacking.  And these kinds of bitter conflicts have a way of escalating.  The North Koreans and the Russians are both very proud, and neither one is going to back down any time soon.  If a foreign power wanted to really make us hurt, it wouldn’t take much imagination at all.  There are thousands of ways to do it.  So Americans should not just smugly assume that we are untouchable.  In a war, it is often those that are overconfident that get hurt the worst.

Last week, Barack Obama blamed North Korea for the nightmarish hack attack on Sony Pictures Entertainment and he promised that the U.S. would respond.

Well, it looks like that response began on Monday.  According to Bloomberg, North Korea’s connection to the Internet was totally cut off…

North Korea’s limited access to the Internet has been cut off, according to a network-monitoring company, days after the U.S. government accused the country of hacking into Sony Corp. (6758)’s files.

North Korea, which has four official networks connecting the country to the Internet — all of which route through China — began experiencing intermittent problems yesterday and today went completely dark, according to Doug Madory, director of Internet analysis at Dyn Research in Hanover, New Hampshire.

Needless to say, that got the attention of the North Koreans.

On their end, the North Koreans are still denying that they had anything to do with the attack on Sony.  And we may never know the actual truth.  In reality, Russia could have carried out such an attack.  Or it could have been the Chinese.  Or it could have even been a false flag cyberattack conducted by a three letter U.S. agency.  We just don’t know.

But what we do know is that North Korea is now vowing to take action against “the White House, the Pentagon and the whole U.S. mainland“…

“The DPRK has already launched the toughest counteraction. Nothing is more serious miscalculation than guessing that just a single movie production company is the target of this counteraction. Our target is all the citadels of the U.S. imperialists who earned the bitterest grudge of all Koreans,” a report on state-run KCNA read.

“Our toughest counteraction will be boldly taken against the White House, the Pentagon and the whole U.S. mainland, the cesspool of terrorism,” the report said, adding that “fighters for justice” including the “Guardians of Peace” — a group that claimed responsibility for the Sony attack — “are sharpening bayonets not only in the U.S. mainland but in all other parts of the world.”

So can North Korea back up those bold words?

But without a doubt our Internet infrastructure is very vulnerable.  As I have written about previously, our big banks are under Internet attack every single minute of every single day.  And in recent months we have seen a whole host of retailers and major corporations get hacked.

This is an emerging threat that should not be underestimated.  As a society, we have become extremely dependent on the Internet, and these attacks are constantly becoming more powerful and more sophisticated.

“Cyberwarfare is increasing dramatically as we speak. There are serious concerns about the ability of the United States’ banking system to whether extremely sophisticated cyberattacks. The Sony breach is just one example of how a detrimental cyberattack can bring one of the world’s most prominent entertainment giants to its knees.”

And we do know that the North Koreans take hacking very seriously.

In fact, it has been reported that North Korea has a small army of hackers that are continually harassing the western world known as “Unit 121″…

Just like in a Bond movie, an army of teenage geniuses tap away at keyboards in fortified complex tucked away from prying eyes in a rogue state, bent on bringing cyber-carnage to their Western enemies on the orders of their leader who is bent on revenge.

But this isn’t the plot line from a film. This is North Korea in 2014. And the cyber-warriors inside have diverted from their usual work of disrupting governments and big business to turn their collective fury on Sony.

The building, the Kim Il-Sung Military Academy, is one of four North Korean universities known to train children, hand-picked for their intelligence from all around the country, and turn them into recruits for an elite group of hackers simply known as Unit 121 or Bureau 121.

Meanwhile, the struggle between the United States and Russia over Ukraine has escalated into a full-blown economic war.

At first, both sides started slapping each other with relatively minor economic sanctions.

But then things started escalating.  I think that things really began to get serious for the U.S. when Russia started to make moves against the petrodollar.  This is not something that has been reported on much at all by the mainstream media in the United States, but it is a very big deal.  If you want to become enemy #1 in the eyes of the U.S. government, just start attacking the petrodollar.  So when Russia began cutting the U.S. dollar out of oil and natural gas transactions, that definitely got the attention of some folks in Washington.  You can read much more about what Russia has been doing in this regard in this article, this article and this article.

Of course Washington was not just going to sit back and let this happen.  The Obama administration has retaliated by going after two of the most important pillars of the Russian economy – oil and the ruble.  And without a doubt, a tremendous amount of damage has already been done.

At this point, Russia is facing a full-blown currency crisis, major banks are starting to fail and economists are forecasting a deep recession for next year…

The central bank bailed out its first victim of the collapsing currency, authorities announced a tax on grain exports to protect domestic stocks and a Reuters poll of 11 economists predicted that Russia’s gross domestic product would fall 3.6 percent next year.

Russia has been hit by what Economy Minister Alexei Ulyukayev recently called a “perfect storm” of plummeting oil prices, sanctions related to its military action in Ukraine, and a flight of investors’ capital — made worse by a lack of structural reforms that means the economy is overwhelmingly dependent on oil revenues.

But don’t count out the Russians just yet.

They are a very crafty people, and they are not afraid to fight dirty.

And it is important to keep in mind that the Russian Bear never forgives and it never forgets.  Most Americans don’t realize this, but right now anti-American sentiment in Russia is actually higher than it was at the end of the Cold War era.  Many Russians believe that this is a new Cold War, and that the United States is the greatest force for evil on the entire planet.

So while many Americans view this current conflict as a temporary foreign policy tussle about Ukraine, many Russians view this as a long-term struggle that is absolutely critical to the future of humanity.  If you doubt this, you should check out some of the things that their leading thinkers have been saying.

This conflict between the United States and Russia is not going to end any time soon.  And someday down the road, it could evolve into something more than just an economic war.  But before that happens, the Russians have a whole host of other ways that they can damage us.

But Russia can also hurt us.

In the end, this conflict is not going to be good for anyone.

The 135 Republicans Who Voted To Confiscate Guns From Our Veterans In Latest NDAA Bill
September 26th, 2021 DC Clothesline