I have been a blogger for a little over two years now and the reaction of the American people never ceases to to amaze me. Yesterday, Mac Slavo posted an incredible interview with Sharyl Attkisson. In the course of that interview, Attkisson talked about a phone call to the CDC. She revealed that the CDC told her that there were 1400 active Ebola cases being monitored in the U.S. 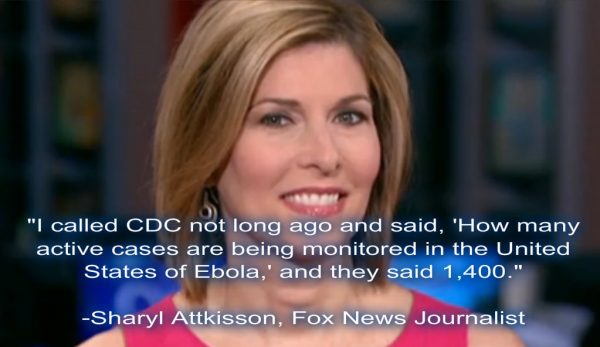 The article received some attention on our website but it wasn’t even close to the top article of the day. People wanted to read about some idiotic woman who thought that children should turn in their parents’ guns. And yes that is an interesting story but come on people…

Do you not think that the media and government hiding 1400 Ebola patients from the American people is a little bigger than a delusional woman whose ideas will (hopefully) never get off the ground?

In case you haven’t seen it, and judging by the numbers most probably have not, here is the video interview attached to Mac’s article:

Are people so bored with the Ebola hype that they are willing to ignore a very credible journalist who is trying to expose the truth? Sharyl Attkisson is a former CBS journalist who now works for FOX News.

Why does she work for FOX News?

Because she was pressured to resign over anti-Obama reporting.

She became an outsider because of her relentless pursuit of truth.

She was one of only a handful of mainstream journalists who even dared to challenge the establishment, and she paid the price.

I also think it’s important to note how 1400 Ebola cases might have been hidden from America if Attkisson’s account is accurate.

There are two major clues as to how this might have been possible.

On October 23rd Paul Joseph Watson published a story about Dr. James Lawrenzi. Lawrenzi exposed what he believed to be the deliberate disappearing and misdiagnosing of Ebola patients in the Kansas City area:

Lawrenzi said that shortly after the arrival of patient zero – Thomas Eric Duncan – in the United States, he was told by a doctor at Truman Lakewood Medical Center in Kansas City they had taken in a possible Ebola patient who had a high fever and was bleeding out of all his orifices having recently returned from West Africa.

The following day, Lawrenzi was told by the doctor that the patient had “disappeared” against medical advice, but that he wouldn’t have been able to leave on his own given hismedical condition.

The day after the patient disappeared, a meeting was called for anyone who had contact with the patient. Doctors and other medical workers were told that the patient had malaria.

A second possible Ebola patient was then admitted to Research Medical Center in Kansas City the following day but also quickly “disappeared,” with hospital bosses claiming he had typhoid, according to Lawrenzi.

How many people are dying now of “Typhoid” or “Malaria” in an attempt to cover up what might really be happening in this country? Again, that might depend on how accurate the information from Attkisson is. But if there were recently 1400 active Ebola cases then I highly doubt that this number was not accompanied by significant loss of American lives.

If they were all effectively treated and cured you can bet that the media and our government would jump on that bit of positive news.

I am sure that many dismissed Lawrenzi as a conspiracy theorist, but shortly after this testimony we also learned that the media might be deliberately hiding Ebola cases as well.

Did everyone notice how Ebola went from front page news to an afterthought in a matter of days? The press seemed to collectively stop coverage all at once. At one point we were receiving numerous daily reports of suspected Ebola cases and it all stopped, almost instantly. How do you explain that? In early November, the truth came out:

After revealing that “an unnamed official abruptly called the press conference to a close” when Wos was asked a difficult question about the suspected Ebola victim, Kroll then drops a bombshell.

“The Associated Press and other press outlets have agreed not to report on suspected cases of Ebola in the United States until a positive viral RNA test is completed,” he writes.

Kroll then felt the need to justify why he was talking about the suspected Ebola case at Duke Hospital, which subsequently turned out to be negative, explaining that he was, “covering tonight’s announcement of a potential Ebola case because it has been reported in my area, and at Duke University Medical Center, an institution where I hold an unpaid adjunct associate professor appointment in their Department of Medicine.”

As a reminder, only 6 mega corporations own the media in this country. So if David Kroll is correct in his analysis it would not be difficult to remove Ebola stories from 95% of everything you watch and read.

I prefer to trust the story of Sharyl Attkisson, an extraordinary woman of conviction, who risked her life and livelihood to be a small beacon of light in an immense sea of darkness.

Though I have been proven wrong before, it would seem that Attkisson is someone on the side of the people.

So why might the establishment hide the Ebola story only to allow it to resurface later?

I don’t know the answer to that, but we surely do put a lot of money into the collective pockets of corporate America at this time of year. Don’t we? The globalists surely would not want to disrupt this annual transfer of wealth.

Time will tell if the Ebola story resurfaces after the holidays.

You have gadgets to buy and credit cards to max out.

If there are 1400 active Ebola cases in America it certainly can’t be more important than finding more stuff to throw under the tree.