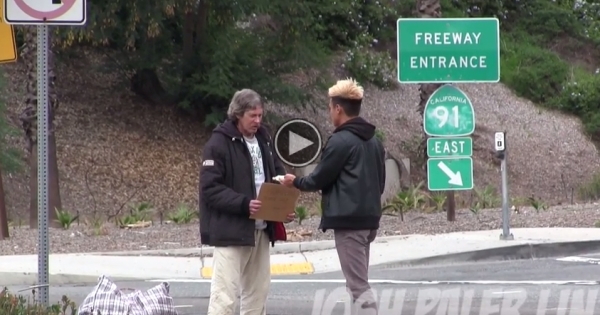 “Oh you thought I was gonna get all smacked up drunk” 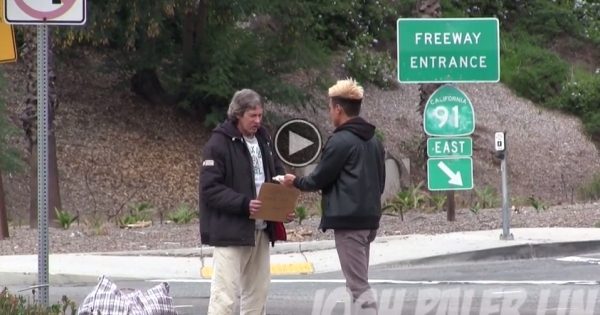 When YouTube star Josh Paler Lin gave a homeless guy $100 and followed him to find out what he was going to spend it on, Paler Lin thought his worst suspicions were about to be confirmed.

The homeless guy headed straight to a liquor store.

“I’m starting to tear up, that’s like incredible….I’ve never had this in my life,” said Thomas after being given $100.

When Thomas subsequently emerges from the liquor store, the film makers seem convinced that the money has probably been spent on alcohol.

However, the man then heads straight for a local park where he begins to hand out food he has just bought to families he doesn’t even know.

Paler Lin then approaches Thomas again and apologizes to him for doubting his intentions.

“Oh you thought I was gonna get all smacked up drunk,” asks Thomas, adding, “There’s things money can’t buy and I get a happiness out of what I’m doing.”

Thomas then explains how he became homeless, explaining that he was living with his parents and had to quit work to look after his ill stepfather. His mother then died and her condo was sold, leaving him homeless.

“I wasn’t expecting to get this kind of footage,” Paler Lin wrote on his YouTube channel. “To be honest, I thought this video would be more an exposing homeless people video at first. But I’m so glad that I could witness and capture such a beautiful moment.”