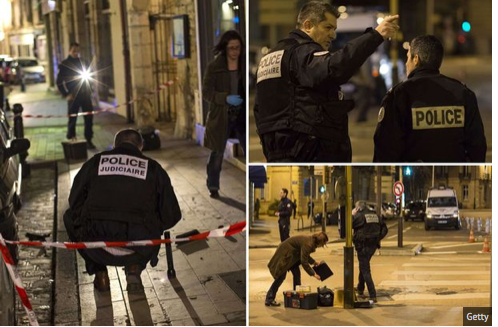 One day after police shot a man dead after he attacked them with a knife while shouting, “Allahu Akbar” (Arabic for “God is greater”), a man went on a 30 minute driving rampage as he targeted pedestrians while shouting the same phrase. This all took place in France and the interesting thing is that the reports fail to identify the man as an Islamist or Muslim, but rather as mentally ill.

French police arrested a man on Sunday evening after he deliberately mowed down a dozen pedestrians in the eastern city of Dijon, badly injuring two of them and shouting “Allahu Akbar” (“God is the greatest”), authorities said.

The Dijon driver, in his forties, slammed his car into groups of pedestrians in five parts of the city before he was arrested and held for questioning, a spokesman for the Interior ministry said on BFM TV.

Eleven people were injured, two of them seriously, but their lives were not at risk, local authorities said.

According to testimonies on the scene, the driver also invoked “the children of Palestine” to explain his actions, the ministry’s spokesman said.

Though Reuters makes mention of France being on high alert for Islamist attacks on their country, one would think that there would be an immediate line drawn to Islam and the man identified as a Muslim, but nothing could be further from the truth. In fact, the Reuters report says that the investigators can’t determine the man’s motives for the attack, but assume he is suffering from mental illness.

Likewise, the BBC reports that the man shouted the “Islamic phrase,” but will not call him an Islamist.

“He was arrested after targeting pedestrians in five different parts of the city in the space of half an hour,” the BBC reported. “He is said to be ‘apparently imbalanced’ and to have spent time in a psychiatric hospital.”

So, again, they don’t identify the man as an Islamist, but as “imbalanced.”

While technically we can say that Islamists are imbalanced and that they are mentally ill to believe the nonsense from contained in the Qur’an, it is an odd thing to have such an incident labeled as a result of mental illness and not the result of the teachings of the Qur’an.

France has made headlines recently as they have opened their border to persecuted Christians by Islamists in Iraq, banned pro-terror protests, and upheld a ban on a jihadist-linked Muslim engineer from their nuclear sites.

While a spokesman for the interior ministry told French television that he believed that that attack was made by a lone wolf, Pamela Geller has put that issue to bed.

Just one week ago, Geller wrote, “There are no lone wolves in the jihad war. There are millions of Muslim soldiers all over the world all following the same playbook – the Quran – and the same ideology – Islam. But the media won’t ever tell you that. It wouldn’t fit in with their pro-jihad propaganda offensive.”

The same can be said of the Oklahoma beheader, who had the support of his mosque and Barack Obama behind him, the jihadist who attacked the Canadian Parliament and various other so-called “lone wolves.” Even Saturday’s murder of two New York police officers by an Islamist didn’t merit the mention of Islam by many reports in the mainstream, but we all know what the truth is, and we all know that Islam stands behind his actions.

Until America is willing to label the enemy for what it is, Islam, then we will always have people attempting to cover for the demonic death cult rather than seek to eliminate it from our soil.