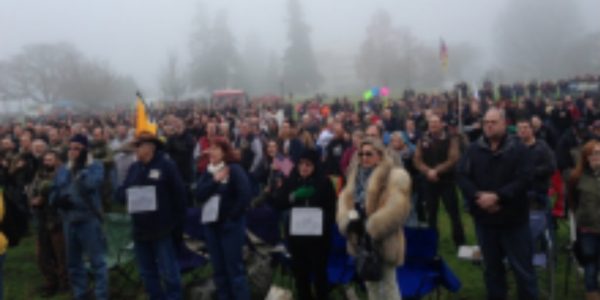 While protests, rallies and downright racebaiting thuggery take place in cities like New York and Ferguson, a peaceful rally took place in America. However, the irony in all of it was that each one of the between 1000 and 3000 in attendance were fully armed law-abiding citizens to protest the new I-594 pretended legislation that passed in Washington State. But they weren’t just protesting, they gathered together to violate the newly passed “law” openly.

Prior to the rally, which was dubbed the “I will not Comply” rally, there had been over 6,000 RSVPs. However, on December 13, 2014, over 1,000 Washington residents descended on the state capitol of Olympia, amid cold and fog, in protest to defy I-594, a gun regisration “law” backed by the likes of Michael Bloomberg and Bill Gates.

According to Organizer Gavin Seim, this was to be no ordinary protest.

“This is not simply a protest,” he wrote. “We will openly exchange, buy and sell and trade guns and start a plan to break apart this legislation and violate i-594 in every possible way. Because ALL law that violates the Constitution is not law, it is VOID!”

Mr. Seim even refused to obtain a permit to exercise his God-given rights protected under the First Amendment to freely protest (freedom of speech) his government.

Interestingly enough, the Washington State Patrol said that they would not be arresting anyone for exchanging or selling their guns.

Seim led the protest in a time of prayer and then in a Pledge of Allegiance. However, Seim said, “I am not pledging obedience to the government, it is to the Republic. We don’t ask for our rights, and we don’t negotiate for our rights. We will take America back.”

His speech was followed by Mike Vanderboegh of the Three Percenter movement, who said, “”We no longer consent nor comply.”

Reminiscent of the American colonists who took up arms against Britain after the British had heavy-handedly tried to crush the Colonists into submission in a variety of ways, finally attempting to take their arms, Vanderboegh declared,

“This is the tyranny the Founding Fathers warned us about. Tyranny can be voted into existence by a majority. We will not fire the first shot, but if need be, we will fire the last.”

Many engaged in what was predicted as the day of burn barrels, similar to those in New York following the passage of the NY SAFE Act, as they pledged themselves to liberty.

Truth and Action reported, “At the end of the rally, gun owners burned their concealed weapons permits and signed a petition vowing to refuse to follow the new gun control law. The petition ended with the text, ‘We pledge our blood. We will not comply.'”

While the rally was overshadowed by the protests in New York and Ferguson, which have resulted in property damage and injuries to other people, this rally was fueled only by the spirit of freedom, not racism. While we have seen the mayhem and even murder in both New York and Ferguson, the thing that liberals, socialists and communists in America have said was such a danger, guns, was on fully display in large numbers of people against government tyranny and not one window was broken, one business burned down nor one police officer beaten or murdered. Stick that in your pipe and smoke it commies!

Another rally took place on December 20 following comments by a Spokane Sheriff’s deputy about needing an MRAP to deal with Constitutionalists. Still another is scheduled for January 15 in Olympia.

According to one report, “The Second Amendment Foundation, headquartered in Bellevue, intends to sue the state over I-594, and will be lobbying the legislature to get the law changed or repealed. Washington State is now ground zero for patriotic gun owners resisting tyranny, which is at a tipping point since law enforcement does not intend to enforce I-594.”

I-594 also had adverse effects on a World War II firearms exhibit. However, instead of the exhibit standing up to the pretended legislation, they chose instead to send the arms back to their owners.

Looks like representatives in Washington might be facing something similar to gun grabbers in Colorado and be looking for a new job soon.

The rally demonstrates the historic words of Samuel Adams, who famously uttered,

“It does not require a majority to prevail, but rather an irate, tireless minority keen to set brush fires in the minds of men.”

Listen as NRA’s Colin Noir explains how I-594 will eventually destroy itself if it is not repealed.