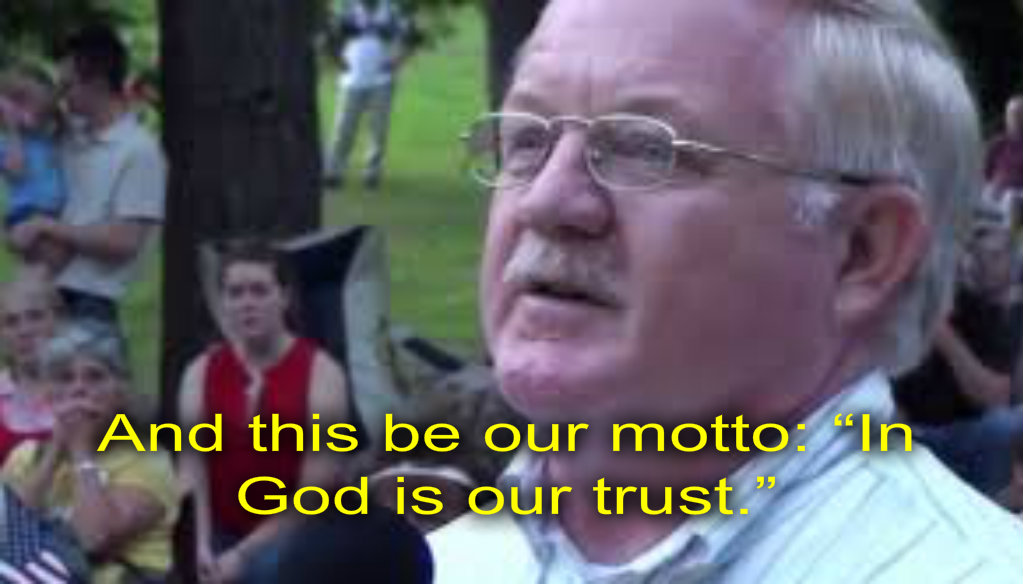 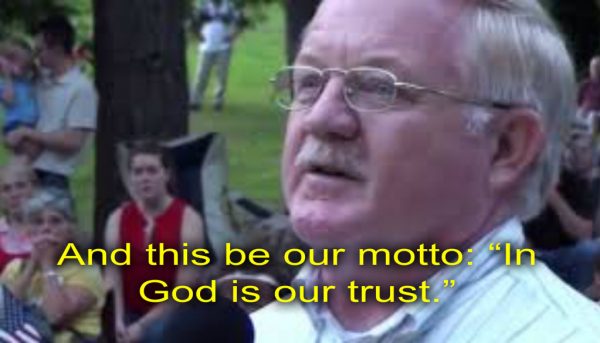 Are you aware that the version of the “Star Spangled Banner” which we sing is not the full version?

I suspect many are not.

In 2010, at a Tea Party gathering, a former Marine inspired the crowd by singing the final verse of our National Anthem:

David Hedrick, who uploaded this video to YouTube in 2010, seems to cherish the significance of this forgotten verse as he points out, “Thank you for the reminder that our rights come from God and not any man or group of men.”

And you wonder why you don’t hear this verse at your local NFL or NBA game?

Do you really wonder?

There has been a push for decades to try to hide the fact that we are indeed a Christian nation. The left has long sought to cripple or destroy the faith that made America great.

For the record, there are actually four verses to our National Anthem and many, or most, Americans are probably only familiar with the first. This Marine was signing the fourth verse. Here are the complete lyrics via Wikipedia:

O say can you see by the dawn’s early light,
What so proudly we hailed at the twilight’s last gleaming,
Whose broad stripes and bright stars through the perilous fight,
O’er the ramparts we watched, were so gallantly streaming?
And the rockets’ red glare, the bombs bursting in air,
Gave proof through the night that our flag was still there;
O say does that star-spangled banner yet wave,
O’er the land of the free and the home of the brave?

On the shore dimly seen through the mists of the deep,
Where the foe’s haughty host in dread silence reposes,
What is that which the breeze, o’er the towering steep,
As it fitfully blows, half conceals, half discloses?
Now it catches the gleam of the morning’s first beam,
In full glory reflected now shines in the stream:
‘Tis the star-spangled banner, O! long may it wave
O’er the land of the free and the home of the brave.

And where is that band who so vauntingly swore
That the havoc of war and the battle’s confusion,
A home and a country, should leave us no more?
Their blood has washed out their foul footsteps’ pollution.
No refuge could save the hireling and slave
From the terror of flight, or the gloom of the grave:
And the star-spangled banner in triumph doth wave,
O’er the land of the free and the home of the brave.

O thus be it ever, when freemen shall stand
Between their loved home and the war’s desolation.
Blest with vict’ry and peace, may the Heav’n rescued land
Praise the Power that hath made and preserved us a nation!
Then conquer we must, when our cause it is just,
And this be our motto: “In God is our trust.”
And the star-spangled banner in triumph shall wave
O’er the land of the free and the home of the brave![12]

Francis Scott Key wrote The Star Spangled Banner, just over 200 years ago, in September of 1814. Key did not write the accompanying music. He wrote the poem which became the lyrics of our National Anthem.

On September 14, 1814, Francis Scott Key composed the lyrics to “The Star-Spangled Banner” after witnessing the massive overnight British bombardment of Fort McHenry inMaryland during the War of 1812. Key, an American lawyer, watched the siege while under detainment on a British ship and penned the famous words after observing with awe that Fort McHenry’s flag survived the 1,800-bomb assault.

After circulating as a handbill, the patriotic lyrics were published in a Baltimore newspaper on September 20, 1814. Key’s words were later set to the tune of “To Anacreon in Heaven,” a popular English song. Throughout the 19th century, “The Star-Spangled Banner” was regarded as the national anthem by most branches of the U.S. armed forces and other groups, but it was not until 1916, and the signing of an executive order by President Woodrow Wilson, that it was formally designated as such. In March 1931, Congress passed an act confirming Wilson’s presidential order, and on March 3 President Hoover signed it into law.

Dr. Larry Toll, of Evangel University, sums up the significance of the fourth stanza of our National Anthem very well when he states, “The poem that Key wrote that morning as he saw the flag over Fort McHenry reflects that sense of resisting an invader, of defending homes, family and freedom. It is also interesting to note Key’s reflection on the idea that the nation had been established by God, and that they were putting their trust in God. We can see the national motto, ‘In God We Trust,’ clearly in this poem.”