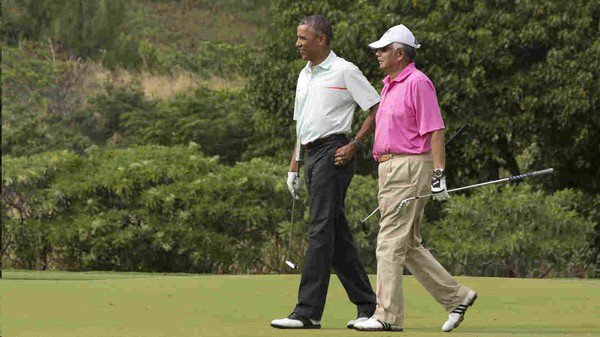 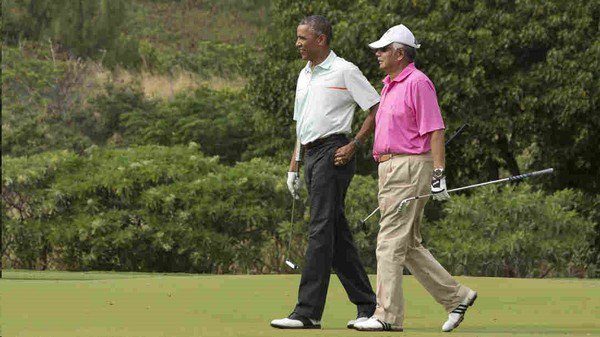 You have to catch the irony here friends. On the eve of what the majority of the Christian world gives thanks to God for the Incarnation of His Son, the Lord Jesus Christ, Barack Obama decided to play golf with an anti-Christ.

President Barack Obama’s zealous pursuit of the perfect golf game has led to his latest challenger on a Hawaiian golf course during his Christmas holiday vacation. The nation’s Commander in Chief teed-off on Christmas eve with the radical Islamist prime minister of Malaysia, who praised the actions of terrorist groups such the Islamic State of Iraq and Syria (ISIS) for their victories. Obama’s advisors have told the news media that President Obama is simply taking advantage of the “warm temperatures in Hawaii to hit the links,” and his opponent is not a factor.

Malaysian Prime Minister Najib Razak joined the president, as well as White House aides Joe Paulsen and Mike Brush, for a round of golf that surprised some, but is expected by others who believe Obama has a soft-spot in his heart for Muslims, even radical ones. “Imagine the outcry if a Republican president played a round of golf with the leader of a nation that terrorizes homosexuals, oppresses women and supports terrorist organizations. It would be the lead story in every major news outlet,” said former NYPD detective and member of a U. S. Marine intelligence unit, Sidney Franes.

According to news reports, the Malaysian prime minister had ordered his national police force in September to clamp down on protesters who were opposed to his Islamist government supporting ISIS and their countries slide into Shariah law. “My party members must emulate the bravery of a Middle Eastern militant group that defeated an Iraqi force outnumbering it nearly 30 to one if we (Malay Islamist party) are to survive,” Najib Razak said during a formal dinner.

First, let me explain something. The term anti-Christ is only used in three times in the first epistle of the apostle John (1 John 2:18) and once in the second epistle of John (2 John 1:7). It is found nowhere else in Scripture. John breaks down what anti-Christ is: it’s a doctrine. And what is that doctrine you ask? John tells us:

And every spirit that confesseth not that Jesus Christ is come in the flesh is not of God: and this is that spirit of antichrist, whereof ye have heard that it should come; and even now already is it in the world.

For many deceivers are entered into the world, who confess not that Jesus Christ is come in the flesh. This is a deceiver and an antichrist.

In other words, antichrists could not exist until Christ came, and John said that antichrists already existed in the first century. These are those that deny the Incarnation: God manifesting Himself in the flesh in the person of Jesus Christ, who is the image of the invisible God (Col. 1:15).

You know this in various sects such as Jehovah’s Witnesses and others, but predominantly this is an undeniable tenant of Islam. They deny that God would manifest Himself in the flesh and they deny the deity of the Lord Jesus Christ. While Christians agree with Islam that men do not become God (something that other religions like Mormonism teach) and we do not believe that God was once a man (something that Mormonism teaches as well), Islam departs from what the Scriptures teach and what Christians have believed, namely that God became a man in the person of Jesus the Christ to save men from their sins.

Now, consider that the Prime Minister of Malaysia adheres to Islam and by definition is an anti-Christ. His nation enforces Sharia upon its citizens and given some of the things the Obama administration has done (here’s just one example), I would assume Obama would love to see Sharia in America as well. Obviously, I am one that questions the true allegiance of Barack Hussein Obama. Though he claims to be Christian, he never presents the doctrine of Christianity. In fact, he’s been caught distorting and outright adding to the texts of Scripture. He rejects that America is a Christian nation, despite the evidence to the contrary.

I agree with Iris Aquino, a former police officer and a homeland security adviser who said, “The fact that our president would play golf with the leader of such a repressive regime speaks volumes of his ignorance or arrogance. And yet he and his administration have repeatedly targeted U.S. police officers and intelligence officers for their vitriol. Yes, it speaks volumes of Barack Obama’s [true] character.”

The problem is for the American people to identify exactly what that character is. It’s evil for sure, but what strain of evil? I believe it is the Islamic evil, but in stealth mode.

Barack Obama knows Islam far more than he does Christianity as evidenced in these quotes. Just notice his pronunciation of the Arabic in this video! In my mind, Barack Obama is a Muslim and he is an anti-Christ (though he may say one thing with his mouth, in works he denies Christ). He has never renounced Islam, but sincerely embraces it and covers for it by deceiving people about Islam’s true face. He even entertains Islamic enemies of America, those who have sworn to destroy us from within, even installing them in the highest levels of his administration.

Therefore, it is little outings like this with the Malaysian Prime Minister that are nothing more than a finger in the eye of the people of America. The question now is, what are you going to do about it?