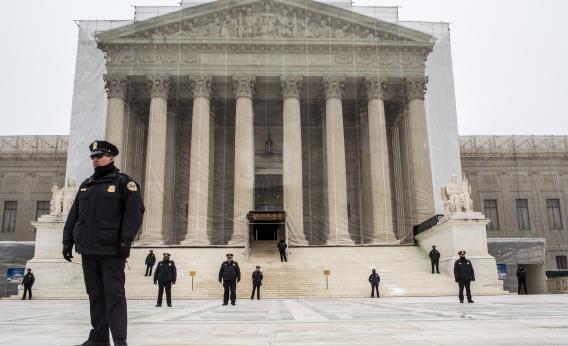 In a blow to the constitutional rights of citizens, the U.S. Supreme Court ruled 8-1 in Heien v. State of North Carolina that police officers are permitted to violate American citizens’ Fourth Amendment rights if the violation results from a “reasonable” mistake about the law on the part of police. Acting contrary to the venerable principle that “ignorance of the law is no excuse,” the Court ruled that evidence obtained by police during a traffic stop that was not legally justified can be used to prosecute the person if police were reasonably mistaken that the person had violated the law. The Rutherford Institute had asked the U.S. Supreme Court to hold law enforcement officials accountable to knowing and abiding by the rule of law. Justice Sonia Sotomayor, the Court’s lone dissenter, warned that the court’s ruling “means further eroding the Fourth Amendment‘s protection of civil liberties in a context where that protection has already been worn down.”

“By refusing to hold police accountable to knowing and abiding by the rule of law, the Supreme Court has given government officials a green light to routinely violate the law,” said John W. Whitehead, president of The Rutherford Institute and author of the award-winning book A Government of Wolves: The Emerging American Police State. “This case may have started out with an improper traffic stop, but where it will end—given the turbulence of our age, with its police overreach, military training drills on American soil, domestic surveillance, SWAT team raids, asset forfeiture, wrongful convictions, and corporate corruption—is not hard to predict. This ruling is what I would call a one-way, nonrefundable ticket to the police state.”

In April 2009, a Surry County (N.C.) law enforcement officer stopped a car traveling on Interstate 77, allegedly because of a brake light which, at first, failed to illuminate and then flickered on. The officer mistakenly believed that state law prohibited driving a car with one broken brake light. In fact, the state traffic law requires only one working brake light. Nevertheless, operating under a mistaken understanding of the law, during the course of the stop, the officer asked for permission to search the car. Nicholas Heien, the owner of the vehicle, granted his consent to a search. Upon the officer finding cocaine in the vehicle, he arrested and charged Heien with trafficking. Prior to his trial, Heien moved to suppress the evidence seized in light of the fact that the officer’s pretext for the stop was erroneous and therefore unlawful. Although the trial court denied the motion to suppress evidence, the state court of appeals determined that, since the police officer had based his initial stop of the car on a mistaken understanding of the law, there was no valid reason for the stop in the first place. On appeal, the North Carolina Supreme Court ruled that even though the officer was wrong in concluding that the inoperable brake light was an offense, because the officer’s mistake was a “reasonable” one, the stop of the car did not violate the Fourth Amendment and the evidence resulting from the stop did not need to be suppressed. In weighing in on the case before the U.S. Supreme Court, Rutherford Institute attorneys warn against allowing government agents to “benefit” from their mistakes of law, deliberate or otherwise, lest it become an incentive for abuse.

Affiliate attorney Christopher F. Moriarty assisted The Rutherford Institute in advancing the arguments in the amicus brief before the U.S. Supreme Court.