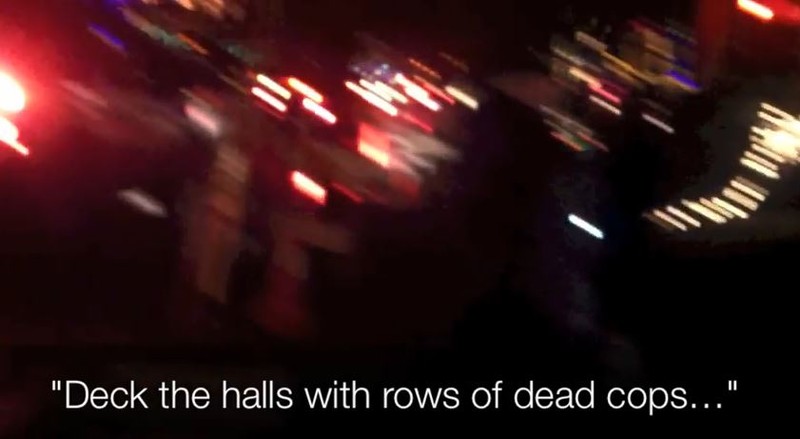 The thugs that make up the protests in Ferguson over the killing of their chief thug, Michael Brown, were singing “Deck The Halls With Rows of Dead Cops.”  Nice, huh?  Where is the prosecutor and police?  Making terroristic threats is still a crime in Missouri. Protesters in Portland, Oregon are also taking to the song.  If the police chiefs in those two cities had any guts, they would publicly instruct police officers in their cities to give anyone with a weapon of any kind one warning to drop it before emptying their clip.

They were also singing, “Cop free Christmas.” and chanting that they don’t want cops.  I found that interesting and I think the police should comply.  A while back I was living in a suburb of Cincinnati, Ohio and the blacks there complained that police were targeting them, especially in the Over-the-Rhine section, where drugs and prostitutes fight for every street corner.  If I’m not mistaken, Al Sharpton was part of that too.  The city agreed to extra training for police to quit racially profiling.

The end result was the police stayed away from Over-the-Rhine and the murder rate climbed dramatically.  When complaints surfaced about not enough police being in the neighborhood, they broke out the agreement and provided logs to show that those areas were being covered at the same percentage as the rest of the population.  As far as the cops were concerned, it was a blessing.  Instead of patrolling Over-the-Rhine and Madisonville, they were patrolling Indian Hills, where none of the mansions are even visible from the street (Ken Griffey Jr lived there), and Deer Park.

Be careful what you wish for because you might just get it.