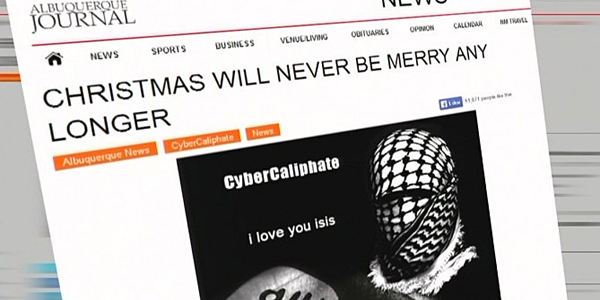 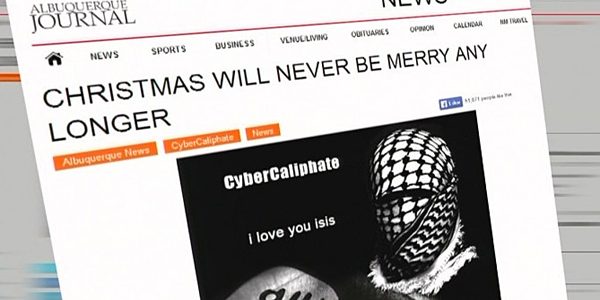 It was reported over the weekend that mobile readers of the Albuquerque Journal received a message from hackers claiming to be members of ISIS.

The message was not transmitted via the regular website but only through the mobile version. The above image is a screenshot of a message delivered via the Journal’s mobile site on Wednesday (Christmas Eve) Morning.

“You’ll see no mercy, infidels. We are already here, we are in your PCs, in each house, in each office. With Allah’s permission we begin with Albuquerque.”

That was the ominous message posted by someone purporting to be affiliated with the Islamic State who apparently hacked the app of New Mexico’s largest newspaper, the Albuquerque Journal, and threatened Albuquerque residents on Wednesday morning.

The posting was accompanied by the headline, “Christmas will never be merry any longer” and a dark photo of a figure wearing a black-and-white checkered head scarf. Text in the middle of the photo read “CyberCaliphate” and “I love you isis” [sic].

The post also stated, “While the us [sic] and its satellites are bombing the Islamic State, we broke into your home networks and personal devices and know everything about you.”

The hacker told Albuquerque residents, “You will look around more often, will call up your children more often, think of your security more often, but that won’t help you.”

From the “ISIS is Here” sign showing up at Ferguson protests (and seemingly not being noticed by a single person at CNN) to the pictures broadcast via Twitter involving a building in Chicago and The White House, the ISIS fear campaign continues.

What remains to be seen, and may never be known, is if the people responsible for these cowardly warnings are actual members of ISIS, ISIS wannabees, or just pranksters who have nothing better to do than scare Americans.

The threats of the Islamic State should be taken seriously, but we must also remember who armed and trained ISIS and recognize that there is a definite possibility that propaganda might be in play as well.

Though this may be just another story meant to distract Americans, it is imperative that we are not lulled into complacency and someday caught by surprise when the threat turns real.