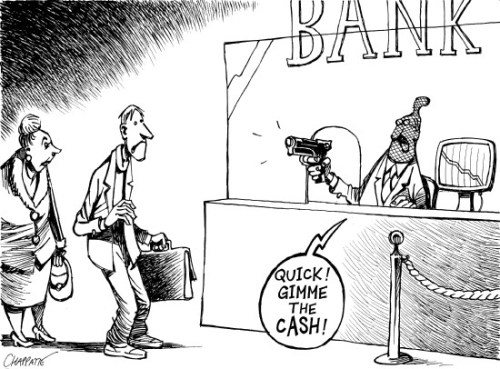 It would appear that your bank is preparing to go on a bank holiday. No, not a vacation, but a holiday. After reading this article, you may find it prudent to check on the liquidity of your bank accounts and investment monies. Why? Because bank bail-ins appear to be commencing.

The Banks Are Not Our Friends

We are all concerned that one day we will attempt to gain access to our money in our bank accounts and and the banks will refuse to honor the request and keep the money. From an anecdotal perspective, it appears that the day that we cannot gain access to our money is now here. There are two instances that I am personally aware of, in which the banks are failing to give their customers full access to THEIR money.

Bail-Ins Appear to Be Beginning

On Monday, one man that I personally know recently attempted to transfer a sizable sum of money (i.e. $110,000) from savings to checking to cover a check he had written for a large purchase. He attempted to move the money through online banking, which nobody should ever engage in, and was unsuccessful. He went to the bank and was subsequently told that there was a problem with his account and he could only transfer about 10% of what he intended to transfer from savings to checking. He inquired as to what the problem was and he was told that the branch did not have access to that information, only that he would not be permitted to make this transfer of funds “at this time”. Today, the charge will hit the bank and the check that he wrote is likely to bounce and will have serious ramifications to his credit. He told me that he is returning to his bank, Chase, with his attorney.

In a more serious situation, a man who has direct deposit from his employer to his bank account, has failed to receive his latest check. The money was due to be paid into his account on December 20, 2014. He called his employer’s accounts payable and was told that the credit had posted on the evening of December 19. Yet, the bank has told this desperate man that they have not received his check. The check also included an end of year bonus and as such is sizable (e.g. in excess of $60,000). This means that the bank has had his money for nine days and cannot account for the money. I have advised this Bank of America account holder to contact the FBI and report this as a crime.

Both victims approached me, about a week apart, because they were both aware that I had previously written articles which are highly critical of the banking system with regard to how insolvent they truly are and they hoped I would have some insight as to what they could do to gain access to their money. The purpose of this article is to fire a shot across the bow of the banks and let them know that we are raising the alarms of what is going on. Where there are two instances of bank thievery, there are two hundred cases. I am requesting that anyone with knowledge of bankster crimes against their depositors pass along this information to myself and I will attempt to synthesize the information and report on the trend curves in these matters as they are occurring.

By the way, Mac Salvo, reported this same kind of crime last month.

The Ownership of the Banking System Is In Flux

I had a significant conversation that I wish everyone in the nation who has money in a bank could have listened to. I was relating the stories of the two men who cannot gain full access to their accounts, to an individual who holds a significant position within the banking system. I approached my old friend in the hope that he could provide some insight as to what is going on and what these two individuals could do to pry their money loose.

I was informed that some of the banking system is being purchased and the sale of banking assets is happening in a very covert manner and as long as a sale is pending, a bank does not want to see fluctuations in their net worth. He also told me that there are statistical algorithms that banks have been told that they must stay within because it impacts the baseline value of a bank in a sale. At that moment, I experienced an epiphany. I was aware that I had knowledge which matched word-for-word what my friend was telling me.

Just over 20 years ago, international banker George Soros made his most famous investment by shorting the British pound and pocketing a billion dollars in the process.  Following this watershed event, he has become well known for moving money and then betting on stock market crashes. In several instances, Soros has been known to rig various markets to fail for his own gain as well as the gain of the international banking cartel in Basel known as the Bank of International Settlements.

Several months ago, Soros made raised eyebrows by making a billion dollar stock bet against the S&P 500. At that particular time, Soros proclaimed, through his actions, that there were warning signs of coming S&P 500 troubles which signaled dangerous times ahead for the US economy. Because Glass-Steagall has been repealed, many banks have a direct and indirect presence in the stock market as evidenced by the folly of the credit-swap derivatives market. Going into the final few days of the year, the American Stock Market has an unprecedented bubble which is reminding many of the months leading of the 1929 Stock Market crash.

Disturbingly, Soros has repeatedly demonstrated that he has had both accurate and advanced knowledge of stock market and banking crashes in the past. Subsequently, savvy investors keep a very close eye on his money movements and resulting holdings as Soros is the “Canary in the mine”. He is the world’s ultimate economic hit man and both bankers and politicians watch his every move with fear and apprehension.

According to a 2014 filing with the Securities and Exchange Commission, it was revealed that Soros sold his holdings in Citigroup, J.P. Morgan and Bank of America. Soros subsequently moved his money and took up new positions in gold and tech stocks associated with Chinese money movement. Soros has moved his money to RF Micro Devices, Nuance Communications, Marvel Technology Group, Nokia Corp., and Cypress Semiconductor. Soros also boosted his stake in Herbalife and took up a new position in Yamana Gold and AuRico Gold, and New Gold Inc. This sent shockwaves among aware investors in the banking and stock market arena.

Soros’ money movements are significant for several reasons. First, he is now betting against both the U.S. Stock Market and now the three major US domestic banks. Second, Soros has obtained a sizable gold portfolio which is something one would want to do if one were expecting, or causing a crash of currency to occur. Finally, and most significantly, Soros is betting against the solvency of the Federal Reserve by running from the three of the major investors (i.e. the three major banks) in the Federal Reserve. This has a lot to do on why the U.S. and Britain practiced for widespread bank failures on November 10th in a drill facilitated by the FDIC. This is also highly significant  because this is occurring at a time when the Federal Reserve gave permission to various Chinese interests (i.e. all controlled by the Chinese military) to purchase sizable positions in American banking which serves to underwrite and partially fund the Federal Reserve.

It is interesting to note that JP Morgan Chase, earlier in 2014, has sold their property located at One Chase Manhattan Plaza skyscraper to Fosun International, a Chinese investment firm, for  the bargain basement price of $725 million. This is only the latest in a series of New York real estate purchases by Chinese investors for properties formerly reserved for Federal Reserve members. This is a highly significant event that received only a couple of days of attention, but quickly faded from the front pages. In a future article, I will go into more detail how Soros is setting a trap for both the Chinese and the Federal Reserve. For now, let’s suffice it to say that his actions are helping to set the course for World War III because war is something that desperate nations engage in when they have no other financial options. America, China, Russia and their military allies are quickly approaching this moment.

On November 16, 2014, I covered the fact that the G20 nations passed a joint resolution to get their nation’s central banking system to declare that your bank account was not defined as money. This was done because the G20 central banks are approaching insolvency. This put your assets at the bottom of the list for FDIC compensation in the event a bank failure.

The fact that these two events happened in close proximity to each other is not surprising. However, it is surprising that these two events (i.e. the bank failure drill and the G20 declaration) happened in such close proximity to each other presents clear signs that the banking industry is preparing to hold on to your money in attempt to stave off financial ruin.

It is important to not leave more than an operating amount of money in your bank. How close the banks are to an all-out bank holiday is difficult to predict. However, I believe we are seeing the chest pains of a banking system which will culminate in World War III. What you can do to minimize this looming and catastrophic event will be covered in my last article of 2014.