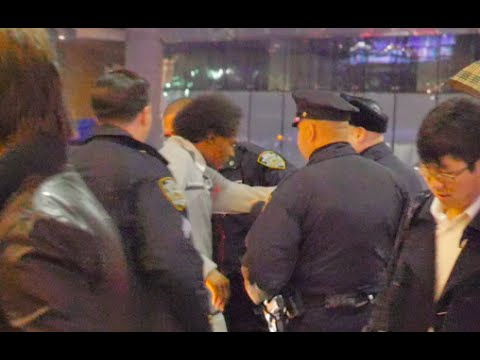 NYPD officers reacted to a harmless prank involving a man dancing on the streets of New York on Christmas Eve by assaulting YouTuber Alexander Bok and throwing him to the ground.

Bok was responding to a challenge set by TV host Ellen Degeneres to dance behind strangers without them noticing. After performing the stunt in front of a number of different people, all of whom just laughed or looked confused, Bok made the mistake of repeating the trick with “New York’s finest”.

Instead of laughing off the incident or calmly telling Bok to leave the area, one of the cops asks Bok, “What’s wrong with you bro?” before grabbing him by the neck and pushing him up against a patrol car.

“Are you fucking kidding me, what’s wrong with you?” repeats the cop as Bok protests that he was just dancing. Bok is then subjected to an impromptu search as the cops continue to berate him, with one stating, “Are you a fucking asshole?”

After realizing that they cannot arrest him, the cops throw Bok to the ground and tell him to walk.

“This type of brutal behavior by the NYPD is exactly why there are tens of thousands of complaints a year and a lawsuit is filed against them every 2 1/2 hours,” writes Matt Agorist. “When the police look more like schoolyard bullies than public servants, there might be a problem.”

As can be seen in the full video below, Bok performed the stunt numerous times without anyone else becoming irate or violent.

Should Bok have been more mindful that New York cops were on high alert after the murder of two NYPD officers just days earlier, or was his treatment another example of police officers immediately escalating to violence when it was totally unnecessary? Let us know in the comments below.