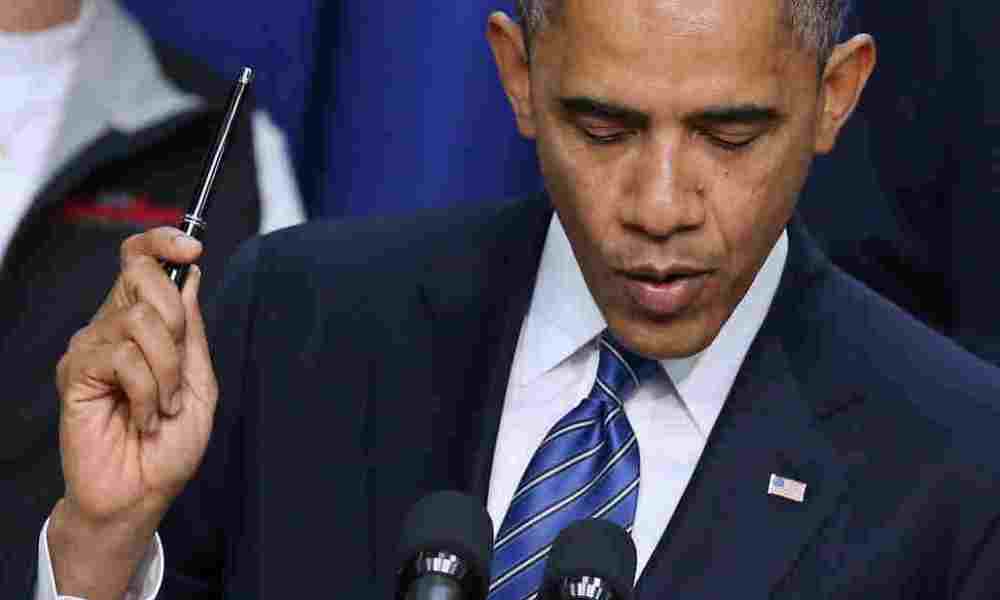 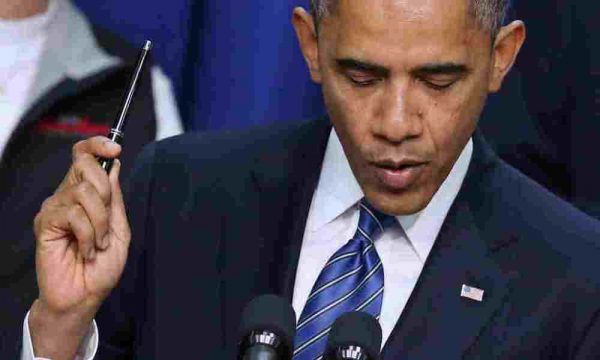 Christmas has come and gone. While many of us are engaged in after-holiday activities, Obama has given America a late “gift” by saying to Republicans in Congress that he will use his famous pen to veto legislation that might derail his immigration plans, climate change agenda, and infamous health care law. Since taking office in 2009, Obama has only used his veto pen twice on legislation. However, with Republicans taking control of the Senate in January, Obama has predicted he will need to use it more often.

In an interview with National Public Radio (NPR), Obama stated, “I haven’t used the veto pen very often since I’ve been in office. Now, I suspect, there are going to be some times where I’ve got to pull that pen out.”

With a Democratic-controlled Senate and Senate Majority Leader Harry Reid stifling many House bills, Obama has not had to engage in the veto process. Any legislation passed by the Republican majority House that did not fit with the Democratic agenda was quickly “laid to rest” on the desk of Harry Reid or killed in the Senate. On issues where Congress could not establish legislation, Obama used his “executive order” pen to create legislation or rewrite current laws.

In other words, Obama wants what he wants, regardless of what the people indicate to their representatives and he will get it one way or another. Americans made it loud and clear at the midterm elections in November they were tired of the Democratic mantra and agenda. That doesn’t matter to Obama. Speaking after his re-election in 2012, Obama stated “this is what the American people want” – meaning “his” agenda.

American voters were hoping their ousting of Democrats in the Senate to gain a Republican majority would produce action on the illegal alien amnesty issue as well as the problems with the immigration law not being enforced. Many voters also hoped a Republican majority Senate would act on the unconstitutional Obamacare and the “war on coal” issue pushed by this administration’s claims of “climate change.” But, with Mitch McConnell (R-KY) slated to take the position as Senate Majority Leader, voters should not get their hopes up.

Obama has indicated that on some issues he was hopeful he would not have to use the “veto pen” as there are overlaps in interests between Obama and Republicans. In part, McConnell agrees with Obama.

McConnell stated, “Bipartisan jobs bills will see the light of day and will make it to the President’s desk, and he’ll have to make decisions about ideology versus creating jobs for the middle class. There’s a lot we can get done together if the president puts his famous pen to use signing bills rather than vetoing legislation his liberal allies don’t like.”

Of course, when it comes to “getting this done together” with Obama, it usually means Obama gets his way or there is heck to pay.

It is expected that cooperation will be seen in areas such as tax reform and global trade deals since these issues are ones on which Obama and Republicans partially agree. Issues that will be a source of contention include the Keystone pipeline, Obama’s unilateral immigration amnesty action, and Environmental Protection Agency (EPA) regulations. Republicans have already caved to illegal alien amnesty by funding the unconstitutional action through January. It is unlikely that will be reversed after millions of illegal alien invaders have received green cards and Social Security numbers. And, Republicans have talked about “courting” the Hispanic/Latino vote plenty in the past few months.

At this stage of the Obama administration, Congress and the American people are dealing with a man acting more like a child than an adult when it comes to the governance of this nation. In dealing with a child, a wise man once said, “Spare the rod, spoil the child.” Congress, so far, has “spared the rod” and all indications suggest they will continue to “spoil the child.”

When the House had the opportunity to de-fund Obamacare, they caved. When the House had the opportunity to stop the “executive order” or rather “memo” for illegal alien amnesty, they funded the debacle through January. Congress has failed in holding accountable the IRS and others involved in targeting conservative groups, reigning in the out of control EPA, bringing to accountability those responsible for inaction regarding Benghazi, and bringing to justice those involved with “Fast and Furious” gun running in Mexico. It would be naïve to presume that a Republican majority legislature would be able to turn the tsunami of this administration’s agenda.

If Congress and Obama were interested in jobs for the middle class and those unemployed, maybe they should consider stemming the massive amounts of rules and regulations by unconstitutional agencies that restrict business growth in the small business sector. Congress should totally derail the unconstitutional “amnesty” to illegal alien law breakers who will now compete for jobs alongside citizens. Less government intrusion by way of rules and regulations issued by executive agencies should lead to more jobs and economic growth.

As far as “tax reform” goes, everyone knows there is no such thing. With over 76,000 pages of tax “law,” there is no clear way to “reform” it, but only add to the total confusion of ever increasing taxation of the people. If both the executive and legislative branches were truly interested in “tax reform,” they would realize 76,000 pages of tax code brings too much complexity for anyone to be sure their returns are accurate.

Americans, who are awake, know these two bodies of government are not interested in any of these things. Their agenda is clear – subjugation of the people to the ever expanding power of the federal government, in particular, the executive despite the limits in the Constitution.

The stage is now set and the players are getting ready for their debut. Obama has set up the new rhetoric of a “do nothing” Congress should he continually use the “veto pen” and Congress is unable to over-ride the veto to pass legislation. This would bring about more of the same Obama mantra “I will act alone where I can to bypass Congress, who are not doing their job.” This sets the tone for more dictatorial, despotic unilateral executive action to make “pseudo-law” with Congress being complicit in the final transformation of America.