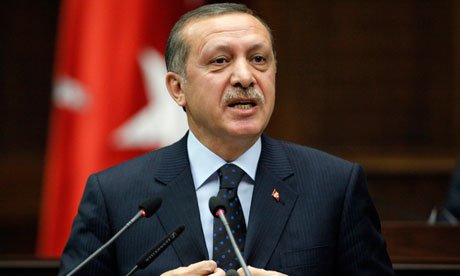 A major talk was organized in Konya, the birth place of Prime Minister of Turkey Ahmet Davutoğlu, and in his presence, before a jubilant crowd shouting in Nazi style, Davutoğlu can be seen elated at the statements spoken by the leader of Hamas, Khalid Mashal. The fiery speech hailed Turkey, headed by Erdogan and Davutoğlu, as the representative and head of the entire Muslim world and praised him for the soon invasion of Jerusalem in the coming world war.

In the speech, which was not aired in major media (Shoebat.com was able to obtain the footage thanks to Willi Adelberger), after the crowd calmed down their Nazi style chants, Mashal reminded that “Jerusalem is the first center of direction for Muslims. It was Konya that, in 1980, when Jerusalem was threatened, rose up for Jerusalem and the Al-Aqsa Mosque.” Looking towards the near future, Mashal declared:

As Turkey, for centuries, was the main defender of Jerusalem and Al-Aqsa Mosque, likewise with you are the center of the Muslim Umma (Muslim nation) which will carry on the mission of liberating Jerusalem and al-Aqsa Mosque.

At the 6:10 mark of the video Khalid Mashal declared:

Know this, that strong Turkey is the strength of Palestine and of Jerusalem.

At around the 7:14 mark he exclaimed:

Turkey is the strength that represents all Muslim nations.

There is a picture of Davutoglu in front of the crowd; he can be seen right next to a young boy:

Ahmet Davutoglu, Erdogan’s right hand man, is seen instantly clapping in jubilation at such affirmations the moment Khalid Mashal spoke of conquering Jerusalem with the crowds waving flags that stem from the Turkish favorite colors in which the Ottomans prided themselves with the “fiery red, hyacinth blue, and sulfur yellow” (Revelation 9:17) which are also the colors of the flags the neo-Ottomans like to carry. In every time one can see Davutoğlu, he is smiling in joy.

Mashal complemented the AKP Islamic party of Turkey of their accomplishments in what he termed “lightning speed to have accomplished what they accomplished for the advancement of the Muslim world.” “Allah is with us and is with you for victory” Mashal reminded of war against Israel. He ended his speech reminding that he will invite Erdogan and Davutoğlu into the Temple Mount: “We were welcomed in Istanbul and now in Konya and tomorrow we will welcome you into the platform of Al-Aqsa (Temple Mount) in the next conferences, by the will of Allah.”

It is obvious what this signifies: the Turkish government wants to invade Jerusalem in a holy war, or jihad. World War III will then be over Jerusalem, which indicates one glorious coming event: the Crusades will be revived, and the Final Crusade will occur.

What is very sad, though, is that the Muslim world still has the spirit of jihad, and we in the West are still stuck in the mindset of the Enlightenment, in which the idea of Holy War or a Crusade is mocked and seen as lunacy, and where secular wars are praised over religious wars.

We must revive the spirit of Holy War, for no secular war will fully extinguish the enemies of Christianity. With secular wars there is an invasion, battles, and then compromise. In religious war there is no compromise, only obliteration of evil for the cause of the good.