In doing research for an article, I came across this NSA parody website: 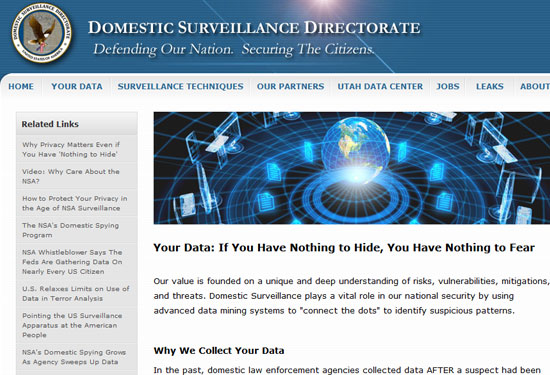 Although it looks pretty official, it didn’t take too long for me to realize it was a fake… only because — unlike our government that uses everything from weak semantic arguments to usurp the Constitution to obfuscation and outright lies to continue our already heavily centralized agencies on their path to total fascist oligarchy at every turn — the parody site was by contrast so honest.

What if we could build a national data warehouse containing information about every person in the United States? Thanks to secret interpretations of the PATRIOT ACT, top-secret Fourth Amendment exceptions allowed by the Foreign Intelligence Surveillance Court, and broad cooperation at the local, state, and federal level, we can!

It even comes complete with lovely graphics showing how our government is illegally sucking up all of our data into a big brother vacuum:

The parody also includes a list of all data which is currently being (or will soon be) collected by the NSA, you know, “in the spirit of openness and transparency”:

What’s funny (and by funny, I mean sad and pathetic) about this is that the NSA did just release a bunch of documents on Christmas Eve (when they knew no one would be paying attention) about all the ways the agency has essentially sidestepped the Constitution by snooping on Americans.

On the official NSA webpage for that, someone in our government actually had the gall to write, “NSA goes to great lengths to ensure compliance with the Constitution, laws and regulations.”

Uh-huh. Sure they do, even as they are literally providing redacted documents proving to each and every American citizen that they don’t.

In fact, at the time I read that, I wondered if that site was a parody. (It’s not, by the way.)

I guess that’s what we will have to keep telling ourselves here in America… Even as we watch the electronic concentration camp continue to be built up all around us and privacy becomes something that gets digitally scrubbed from our dictionaries.