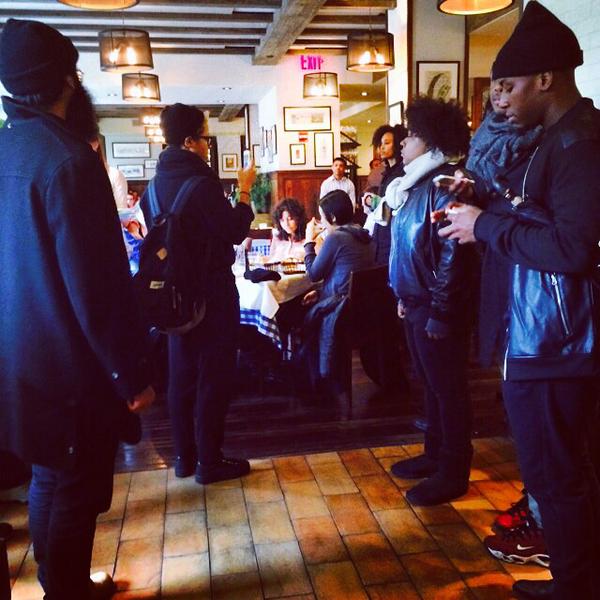 Black Lives Matter protesters demonstrated against police brutality across New York on Sunday by interrupting white people eating brunch, a clear sign that the movement which, started with unrest in Ferguson, Missouri back in November, is beginning to lose steam.

Social justice warriors tweeted out photos of handfuls of demonstrators crashing cafes and restaurants with captions such as, “ATTN WHITE Man, I have no guilt disturbing your brunch. Its YOU that has no right to be here.”

ATTN WHITE Man, I have no guilt disturbing your brunch. Its YOU that has no right to be here. #blackbrunchnyc pic.twitter.com/mFRq5Q9hbe

Some even accused the white diners of being complicit in “genocide”.

Protesters read out the name of blacks killed by police officers in front of random white dudes drinking their morning coffee – because “racism” or something….

Another tweet asserted the protesters were “interrupting white supremacy one brunch at a time”.

We interrupt your brunch time to let you know there is a war on Black lives. We will not stay silent. #BlackBrunchNYC pic.twitter.com/LeDDQeEKGB

It later emerged that one of the restaurants targeted was owned by Democrat and Hillary Clinton supporter Danny Meyer.

“Progressive activists are becoming increasingly desperate to maintain what they saw as momentum for their cause,” writes Derek Hunter. “But, as is the case with any dying movement, when the larger crowds dwindle, the only people left are the extremists and radicals who have no appeal to anyone outside of their fellow radicals.”

The hashtag #BlackBrunchNYC quickly devolved into scores of Twitter users poking fun at the participants.

This #blackbrunchnyc is the best idea ever! Yell at random people guilty or not of “oppression” of “your” people, that’s not stereotyping!

Goodness this isn’t what Montgomery Bus Boycott or Woolworth sit-ins were about -this is ignorance #blackbrunchnyc pic.twitter.com/ewRbXOi1Sx

*iPhones raised in unison to film for later attention-whoring* “We are oppressed by your white privilege!” #BlackBrunchNYC

1955: Rosa Parks bravely disobeys order to move to the back of the bus 2015: #BlackBrunchNYC idiotically blocks the front of Golden Corral

How to win hearts and minds for black people. Invade local businesses and the Apple store and scream #BlackBrunch pic.twitter.com/RJBXYszu6B

“What did you do in the Culture Wars, grandpa?” “I whined about racist bacon & eggs on Twitter. Yes I did.” #BlackBrunch #STFU

So 16 have been shot, killed in Chicago in 2015 but God forbid New Yorkers eat brunch because #WhiteSupremacy! #blackbrunchnyc you’re fired.

#BlackBrunch I’m sure the president, who was raised in #whiteprivilege, is enjoying a superb meal somewhere. HINT HINT. #ThingsIdPayToSee

#BlackBrunchNYC is supposed to enlighten people about “the war on black lives” but strangely, it doesn’t seem to be about abortion.

Who told this group that making yourself look like dumbasses at random Diners was the best way to get your message heard? #blackbrunchnyc

How dare folks go out for an omelette with friends and family on a Sunday! #blackbrunchnyc #BlackBrunch

One person responded to the ridicule by tweeting, “your people literally killed and raped my ancestors”.

OMG. ALL THESE WHITE PEEPO COMING OUTTA THE FORREST TO TELL ME. IM RACIST?? your people literally Killed and raped my ancestors…

As we have documented at every turn, what started out as a potentially important opportunity to shine a spotlight on police brutality has quickly disintegrated after leaders of the movement chose to make it all about race rather than police abuse, ostracizing millions of Americans who might otherwise have supported their cause.

From chanting for the deaths of police officers, to harassing parents and children in shopping malls, to blocking freeways, the Black Lives Matter demonstrators have only succeeded in bolstering support for police across the nation, discrediting opposition to the genuine problem of police brutality and the militarization of law enforcement.