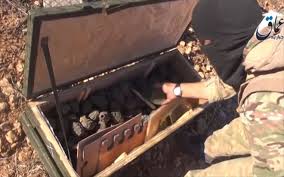 Back in October it was widely reported that the United States was responsible for accidentally dropping weapons and supplies to ISIS in Syria. The mainstream media played it off as a mistake. Many in the alternative media, however, hinted that it was intentional, though admittedly difficult to prove.

Melissa Melton was one of the more vocal opponents of the MSM narrative at the time:

Are they really going to claim intelligence failure when, thanks to former NSA contractor Edward Snowden’s leaks, we now know we live in a world where the U.S. government can suck up the communications data of an entire country at once?

Previously released videos from Iraq also purport to show ISIS fighters zooming around in U.S. tanks, humvees and mine-resistant, ambush-protected (MRAP) vehicles. There are even unconfirmed reports according to The Daily Beast that three U.S. fighter jets have been stolen from ISIS-conquered bases.

Was it really a mistake, or is the truth that America was caught supporting ISIS and had to scramble for excuses?

If you do not realize that our government was instrumental in the training and funding of ISIS then you might want to do some research.

This is where many fail in their train of logic, however. If our government has use for terrorists that run around and raise havoc all over the world, which they very well might, it does not make the said terrorists into hapless victims.

Nonetheless, that is a view you will get from a large part of the “leftist” alternative media. The view here is that Islam really is peace but our government is not. The contrary view from much of the hard right alt media is that the Muslims are always 100% at fault and our government does not share in the responsibility.

The truth is that if you need “dirty deeds done dirt cheap” then you have to know where to go. Our government is not knocking on the doors of Christian Churches or Jewish Synagogues to find their henchmen. If you need a savage then you go where the savages hang out. They are freely available at any local mosque.

With all of that said, recently there have been consistent foreign media reports, coming from Iraq, that America is dropping more weapons and supplies to ISIS.

On Saturday, MP Majid al-Ghraoui said that, an American aircraft dropped a load of weapons and equipment into the hands of the ISIS group militants in southeast of Tikrit, located in Salahuddin province.

MP Majid al-Ghraoui, the member of the Security and Defense Committee in the Parliament, said: “The information that has reached us in the security and defense committee indicates that an American aircraft dropped a load of weapons and equipment to the ISIS group militants at the area of al-Dour in the province of Salahuddin.”

He added, “The committee will set a meeting within the next few days to follow up on that incident,” pointing out that, “This incident is continuously happening and has also occurred in some other regions.”

As the “convenient” and “accidental” airdrops of weapons and supplies by the US and NATO into the hands of ISIS and al-Qaeda jihadists fighting inside both Syria and Iraq begin to draw more attention throughout largely alternative media outlets, such convenient mistakes are also being questioned by national governments, particularly those who may be in the crosshairs of NATO in the very near future.

Individuals who have come to question the nature of the allegedly accidental air drops are legion, but one of the more recent and high profile skeptics is the Commander of Iran’s Basij Force, Brigadier General Mohammed Reza Naqdi.

In an address to a group of Basij forces on January 5, Naqdi stated that “The US directly supports the ISIL in Iraq and the US planes drop the needed aids and weapons for ISIL in Iraq …” In addition, he stated that the US Embassy in Baghdad is the command center for ISIL and other “takfiri” militants.

It is important to mention that, according to FARS News, the Iraqi Parliamentary Security and Defense Commission revealed that a US plane did indeed supply ISIS with arms and ammunition in the Salahuddin province in Iraq, yet that revelation has received little to no coverage in the West.

In late December, 2014, yet another Iraqi lawmaker, Nahlah al-Hababi, questioned the motives and commitment of the US and its anti-ISIL coalition and claimed that the terrorist groups are actually receiving a large amount of aid dropped by unidentified aircraft.

Hababi is quoted by FARS News Agency as stating “The international coalition is not serious about air strikes on ISIL terrorists and is even seeking to take out the popular Basij (voluntary) forces from the battlefield against the Takfiris so that the problem with ISIL remains unsolved in the near future.”

Americans may never know if this is Iraqi propaganda or the plain and simple truth.

However, as a truth seeker, I feel it important to ask myself questions that may help me resolve the likelihood of the claims. I may not know if it is true, but I do need to know if it is possible or even likely.

Does the U.S. have a previous track record of funding terrorists?

I would say that only the most dumbed-down sheep could answer “no” to that.

Has this ever happened before (meaning the air drop)?

We all know about the “oopsie” moment in October of 2014.

There are dozens of questions that could and should be asked, do not forget “motive” for instance, but you can not deny that this story is highly possible.

However, until Americans are willing to admit that our government is aiding and supplying these savages, and that our President is a “Radical” Islamic enemy of America, then we can’t change a thing. We have to accept the truth before we can do anything about it.