You know things are bad when the only leading voice in the leftist-controlled mainstream media to speak candidly about the jihad threat is Bill Maher. But he is, and ….he’s very good at it.

I do not agree with Bill Maher on a multitude of issues (the list is too long to rattle off here) but he is, bar none, singular and brave on Islam. There is no one else given this platform to speak these harsh truths. It had to be a liberal.

It’s a pity that Maher doesn’t host more counter jihadists on his own show.

The comedian responded to the deadly attack on a French satirical magazine by renewing his recent criticisms of the Islamic faith.

Bill Maher didn’t hold back Wednesday night, blasting “hundreds of millions” of the world’s Muslims for allegedly supporting the Islamic terrorist massacre of cartoonists, writers, and editors at a Parisian satirical magazine that has mocked the Prophet Muhammad.

“Hundreds of millions of Muslims?” a clearly skeptical Kimmel asked his fellow comedian, an out and proud atheist who in recent years has targeted the adherents of Islam for harsh criticism. 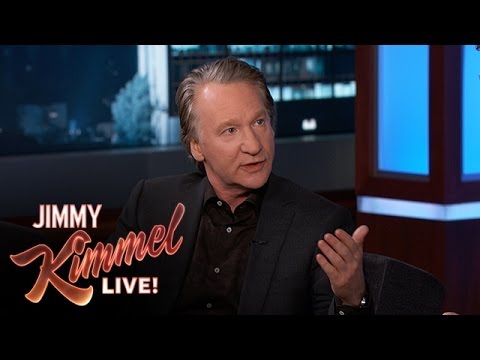 He continued, “I’m the liberal in this debate,” adding that he grew up in a family that supported John F. Kennedy over racist Southern governments in the fight for civil rights. “The reason we were liberals is we were against oppression.”

Needless to say, Maher’s vitriolic rant drew few laughs from the studio audience, which seemed stunned into silence by his uncompromising anger.

Maher’s well-known anti-Islamic views have come in for severe criticism in recent months from moderate Muslims and even prominent liberals (such as Ben Affleck on an installment of Real Time) who’ve accused him of intolerance and ignorance.

He praised the murdered editors, writers, and cartoonists of the satirical magazine Charlie Hebdo for their bravery in lampooning Muslims in the face of death threats and even the November 2011 firebombing of their offices. “These guys had the balls of the Eiffel Tower. Their balls were bigger than Gerard Depardieu,” Maher said.

By contrast, he said in a line that was partially bleeped during the broadcast, the politically correct liberals of the United States, especially those who’ve been arguing for sensitivity to delicate Muslim sensibilities, had turned America into “Pussy Nation.”

Maher cited an unidentified “study” of 130 countries in which 17 majority Muslim countries ranked in the bottom 20 regarding the treatment of women. “In 10 Muslim countries, you can get the death penalty just for being gay. They chop heads off in the square in Mecca. Well, Mecca is their Vatican City. If they were chopping heads off gay people in Vatican City, wouldn’t there be a bigger outcry among liberals?”

When the show resumed after a commercial break, Maher’s bile had not run out, and he spent the next several minutes venting at Bill Cosby. Not only had the iconic comedian sexually assaulted many, many women, Maher argued, “I never thought he was funny.” He added: “People say he deserves his day in court… Do we have enough time?”

Maher drew a contrast between the embattled Cosby, who has so far been accused by some 30 alleged victims, to such high-profile alleged offenders as Woody Allen, “who had one accuser,” and the late Michael Jackson, “who had two or three accusers,” young boys who said he fondled them.

Recounting a childhood incident on the school playground, where one bully held him down while another socked him repeatedly in the face, Maher said that given the choice between that and “being jerked off by a pop star”—another bleeped phrase—he’d take the latter.