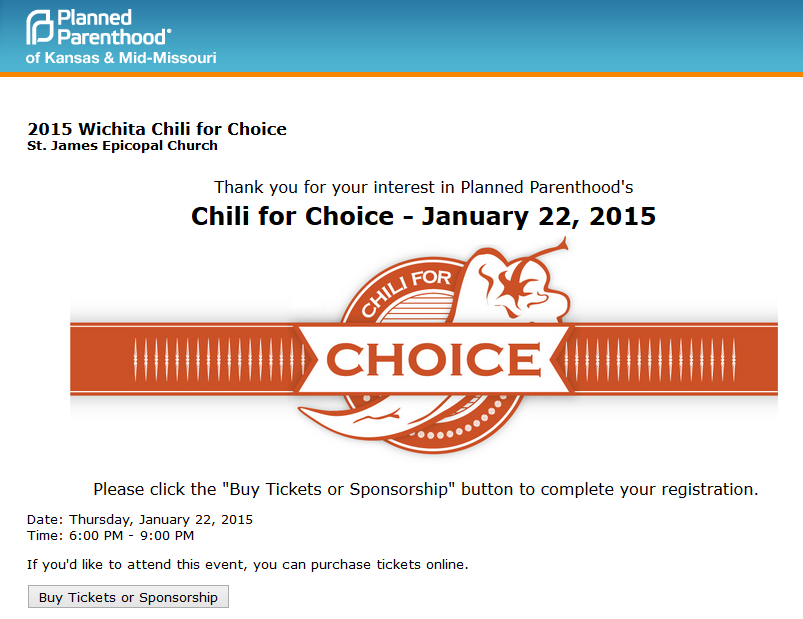 Michael F. Haverluck reports for One News Now that on Jan. 22, 2015, to celebrate the 42nd anniversary of the 1973 Roe v. Wade Supreme Court decision that opened the floodgates to the killing of the unborn in America, St. James Episcopal Church in Wichita, Kansas, is hosting a “Chili for Choice” event to bring more money to Planned Parenthood of Kansas & Mid-Missouri. 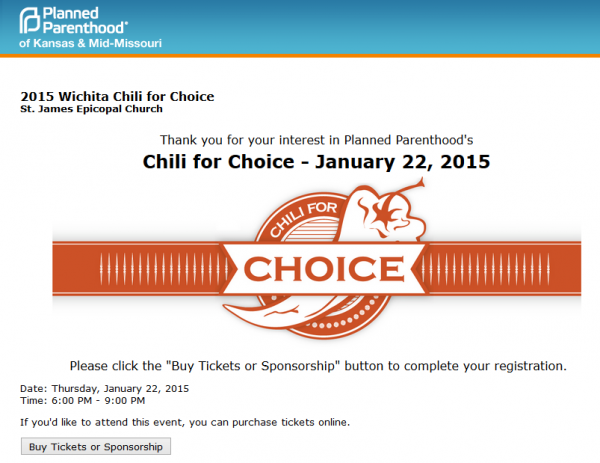 In other words, a supposedly Christian church is hosting a fund-raiser to  kill unborn human beings.

St. James Episcopal is encouraging its congregation to not only buy tickets or sponsorships, but to invite friends and family to endorse abortion-on-demand. Ticket prices range from an “income-sensitive” $20 all the way up to $1,000.

Not that Planned Parenthood (PP) actually needs the Episcopal church’s fundraiser because:

1. U.S. taxpayers — including taxpayers in Wichita, Kansas — already “subsidize” PP to the tune of $528 million in fiscal year 2013-2014 — more than $1.4 million a day — or 41% of PP’s revenue. In fact, PP has raked in over $3 billion in taxpayer funds during President Barack “Lucifer” Obama’s 6 years in office — an increase of 43% since Obama took office in 2009. Not coincidentally, abortions have increased 8% during his presidency. That would account for why PP has hailed Obama as its “champion”; that is also why Dr. James Dobson called Obama the “abortion president.”

Back to St. James Episcopal Church.

Although Susan B. Anthony List found that abortions made up 94% of Planned Parenthood’s “services” in 2013, a representative of St. James answering the phones told a pro-life advocate that PP doesn’t do abortions.

Wichita’s St. James is not the only U.S. Episcopal church in league with the Devil.

LifeNews reported last September that in Louisiana, an Episcopal priest circulated a letter calling Christians to support the construction of a new Planned Parenthood abortion facility in New Orleans – the abortion epicenter of Louisiana.

Life News reports that more than 80 House members of the new 114th Congress have re-introduced a bill to defund Planned Parenthood. Title X Abortion Provider Prohibition Act would ensure that Title X family planning grants are used for their intended purpose and are prohibited from being used by organizations that provide abortions or fund those that do.