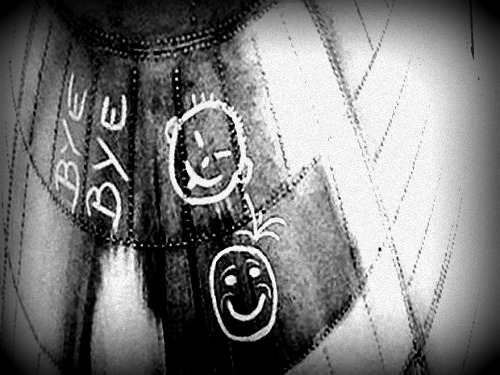 Would you be comfortable flying on an airplane that had the graffiti in the picture above drawn on its tail cone?

Thirteen flight attendants weren’t – and were fired for refusing to fly on the aircraft.

This week, the terminated employees filed a 26-page whistleblower complaint with the Occupational Safety and Health Administration (OSHA) of the Department of Labor (DOL). The flight attendants claim that United Airlines “unlawfully fired them in retaliation for refusing to fly on a Boeing 747-400 passenger aircraft after learning of a credible and specific threat to the safety of the aircraft, its passengers and crew,” according to the website of Katz, Marshall, & Banks, the law firm that is representing the flight attendants.

United Flight 869 was scheduled to fly from San Francisco International Airport to Hong Kong on July 14, 2014, when a disturbing image was discovered on the plane’s tail cone. As shown in the photograph above, someone had written “BYE BYE” above two faces – one smiling, and one with a more menacing expression.

One might think it was simply a person being mischievous, a prankster along the lines of those who write things like “wash me” on dirty cars and trucks.

But the graffiti was near the access panel to a gas turbine engine housed in the tail cone. That part of the plane is about 30 feet off the ground. It is only accessible by authorized personnel using special equipment. The images could have been written while the plane was on the ground in San Francisco, or at South Korea’s Incheon Airport (the plane arrived from there that morning).

Here are some key points from SFGate’s coverage of the story. Most of this information comes from the complaint that was filed by the terminated employees:

First Officer Jeff Montgomery, one of four pilots on the flight, discovered and photographed the image. He allegedly shared the photo with the other pilots and told one flight attendant he had seen a “disturbing image” on the aircraft. Montgomery requested a visual inspection of the engine compartment and removal of the image.

The chief purser, Angel Wan, also photographed the image with her cell phone and was told by Capt. Willard Bowman that the plane would be holding because of what he had termed a “security concern.”

Bowman allegedly told the more than 300 passengers the delay was due to a maintenance issue.

Flight attendant Evans Francisco Jesus Mendonca allegedly told Bowman he was uncomfortable and did not believe it was safe to fly without a full investigation. “Captain Bowman replied, ‘I’m with you,’ and said that he also was ‘uncomfortable,’ but added that he was awaiting a decision from ‘those guys,’ presumably meaning Airline management, regarding whether to proceed with the flight.”

Maintenance inspectors finished searching the engine compartment around 2:30 p.m. and found nothing suspicious, but did not investigate other portions of the plane.

Bowman allegedly told some of the flight attendants the graffiti was a “one-off joke” and suggested that mechanics in South Korea had drawn it. He then told flight attendants he was comfortable with the plane’s safety and security.

Flight attendants must comply with a direct order unless it would endanger the health or safety of crew or passengers.

Some of the flight attendants felt the only way to be sure the plane was safe would be to conduct a complete security sweep, per FAA guidelines. This would require deplaning the passengers and searching the plane.

Allegedly, Bowman said there was no time for that, and insisted the plane was safe for takeoff.

The thirteen flight attendants were ordered to work, but they refused, stating that they would only work if the airline provided a different plane.

United ended up cancelling the flight a few hours later, due to “crew availability” issues.

The flight attendants were fired for “insubordination” in October.

According to the complaint, flight attendants were told the plane was then grounded for two days. They said United told them that “time was needed for the aircraft to resume its rotational schedule.”

The thirteen flight attendants each have 17 to 29 years of experience with United. They believed that the graffiti could have been a potential threat – one that could have put the lives of more than 300 people in danger.

A primary part of the flight attendant’s job is keeping passengers safe.

What if the flight attendants didn’t refuse to fly, and the plane blew up? What if they noticed the graffiti, but brushed it off as a prank…but it was actually a serious threat?

Isn’t it better to be safe than sorry, especially when the lives of 300 people are in your hands?

How long would it have taken for the airline to deplane the passengers and do a sweep of the plane? Perhaps that option would have been better than refusing to comply with the flight attendants’ request, which ultimately resulted in the flight being cancelled…which likely caused significant hardships for the passengers.

Is it unreasonable for flight attendants and passengers to be concerned about nefarious-looking graffiti on part of a plane that isn’t supposed to be accessible by anyone without authorization to get that close to the aircraft? Presumably, the only people who would have been able to reach that section of the plane would be employees like mechanics or maintenance technicians. Is it crazy to think that, hey, maybe one of those people is disgruntled and did something to sabotage the plane? Or that someone who shouldn’t have had access to the aircraft somehow managed to?

The crew said they were already on heightened alert after the disappearance of Malaysian Flight 370 and a warning issued a week earlier from the Transportation Security Administration about possible phone and laptop bombs, reports the LA Times.

“These flight attendants refused to let an airline bully them into flying because of what they believed, correctly, was a security threat.” (source)

“Our clients did exactly what the flying public would expect from a group of highly experienced airline professionals. … Our clients are entitled to legal protection for doing what was right.” (source)

In a press statement, Grace Lam, one of the flight attendants, said:

“Given the gravity of the risk involved — the lives of passengers and crew alike — we were not willing to bow to United’s pressure to ignore an unresolved security threat even though the company made clear that we risked losing our jobs.”

The flight attendants’ complaint “alleges that the terminations violated the Wendell H. Ford Aviation Investment and Reform Act for the 21st Century, one of many whistle-blower protection laws OSHA administers. Either party can appeal OSHA’s decision to an administrative law judge. The attendants are seeking reinstatement, back pay, compensatory damages and payment of attorneys’ fees and costs,” reports SFGate.

Was the graffiti on the plane mischief or menace? Initially, one might think it was simple mischief, but then why did the airline ground that plane for two days after the incident?