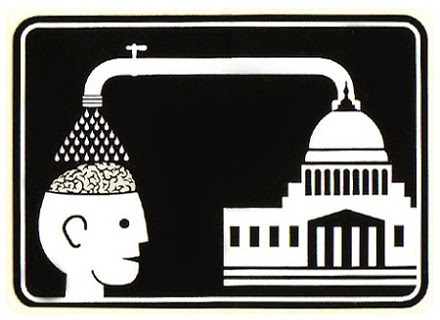 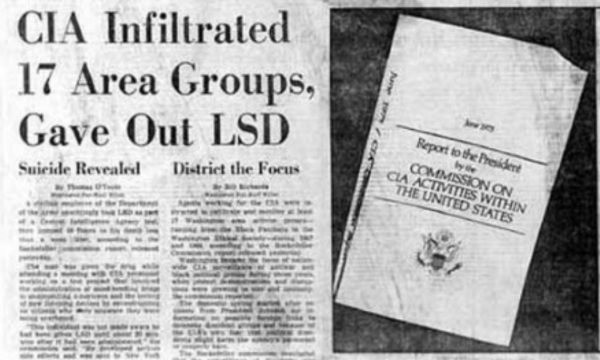 Follow me on a few twists and turns down the rabbit hole.

Start with this untitled June 27, 1994, document, stored at the National Security Archive at The George Washington University.

It was written by a CIA advisory committee, and forwarded to the Presidential Committee on Human Radiation Experiments, which was preparing public hearings in 1994.

Here is a key quote:

“In the 1950s and 60s, the CIA engaged in an extensive program of human experimentation [MKULTRA], using drugs, psychological, and other means, in search of techniques to control human behavior for counterintelligence and covert action purposes… Most of the MKULTRA records were deliberately destroyed in 1973 by the order of then DCI Richard Helms…Helms testified that he agreed to destroy the records because ‘there had been relationships with outsiders in government agencies and other organizations and that these would be sensitive in this kind of a thing but that since the [mind-control] program was over and finished and done with, we thought we would just get rid of files as well, so that anybody who assisted us in the past would not be subject to follow-up questions, embarrassment, if you will.’”

Helms was not only admitting he destroyed the records, he was stating that the MKULTRA program deployed, through contracts, “outsiders” to carry out mind control experiments. He was determined to protect the outsiders, to keep their identity and work secret. He was also dedicated to preventing these people from exposing the nature of their mind-control work.

Subsequently, some of these “outsiders” have been revealed. But no one really knows how deep, far, and wide the CIA penetrated into academic and research communities to enable MKULTRA.

Helms also stated that MKULTRA was ended. There is no reason to believe this. Therefore, his justification for destroying huge numbers of documents was absurd.

For example: Back in the early 1990s, I interviewed John Marks, author of Search for the Manchurian Candidate. This was the book that exposed the existence of the infamous CIA MKULTRA program.

John Marks related the following facts to me. He had filed many Freedom of Information (FOIA) requests to the CIA for documents relating to their mind-control program. He got nothing back.

Finally, as if to play a joke on him, someone at the CIA sent him 10 boxes of financial and accounting records. The attitude was, “Here, see what you can do with this.”

I’ve seen some of those records. They’re very boring reading.

But Marks went through them, and lo and behold, he found he could piece together MKULTRA projects, based on the funding data.

Eventually, he assembled enough information to begin naming names. He conducted interviews. The shape of MKULTRA swam into view. And so he wrote his book, Search for the Manchurian Candidate.

Marks continued to press the CIA for more MKULTRA information. He explained to me what then happened. A CIA official told him the following: in 1962, after ten years of mind-control experiments, the whole program—which supposedly was shut down—had actually been shifted over to another internal CIA department, the Office of Research and Development (ORD).

The ORD had a hundred boxes of information on their MKULTRA work, and there was no way under the sun, Marks was told, that he was ever going to get his hands on any of that. It was over. It didn’t matter how many FOIA requests Marks filed. He was done. The door was shut. Goodbye.

The CIA went darker than it ever had before. No leaks of any kind would be permitted.

In case there is any doubt about it, the idea of relying on the CIA to admit what it has done in the mind-control area, what it is doing, and what it will do should be put to bed by John Mark’s statements. The CIA always has been, and will continue to be, a rogue agency beyond the reach of the law.

So…can we go back in time and find evidence that the CIA embraced goals that would take their mind-control research right up through the present day?

Goal: develop drugs to transform individuals…and even, by implication, society.

The intention is there, in the record.

It begins: “A portion of the Research and Development Program of [CIA’s] TSS/Chemical Division is devoted to the discovery of the following materials and methods:”

The range of CIA intentions was stunning.

Some of my comments gleaned from studying that drug list—

The CIA wanted to find substances which would “promote illogical thinking and impulsiveness.” Serious consideration should be given to the idea that psychiatric medications, food additives, herbicides, and industrial chemicals (like fluorides) would eventually satisfy that requirement.

The CIA wanted to find drugs that would “produce amnesia.” Ideal for discrediting whistleblowers, dissidents, certain political candidates, and other investigators. (Scopolamine, for example.)

The CIA wanted to develop drugs that would “alter personality structure” and thus induce a person’s dependence on another person. How about dependence in general? For instance, dependence on institutions, governments?

The CIA wanted to discover chemicals that would “lower the ambition and general working efficiency of men.” Sounds like a general description of the devolution of society.

Here, from 1955, are the types of drugs the MKULTRA men at the CIA were looking for. These are direct quotes from the document:

Substances which will promote illogical thinking and impulsiveness to the point where the recipient would be discredited in public.

Substances which increase the efficiency of mentation and perception.

Materials which will prevent or counteract the intoxicating effect of alcohol.

Materials which will promote the intoxicating effect of alcohol.

Materials which will produce the signs and symptoms of recognized diseases in a reversible way so that they may be used for malingering, etc.

Materials which will render the induction of hypnosis easier or otherwise enhance its usefulness.

Substances which will enhance the ability of individuals to withstand privation, torture and coercion during interrogation and so-called “brain-washing”.

Materials and physical methods which will produce amnesia for events preceding and during their use.

Physical methods of producing shock and confusion over extended periods of time and capable of surreptitious use.

Substances which produce physical disablement such as paralysis of the legs, acute anemia, etc.

Substances which will produce “pure” euphoria with no subsequent let-down.

Substances which alter personality structure in such a way that the tendency of the recipient to become dependent upon another person is enhanced.

A material which will cause mental confusion of such a type that the individual under its influence will find it difficult to maintain a fabrication under questioning.

Substances which will lower the ambition and general working efficiency of men when administered in undetectable amounts.

Substances which promote weakness or distortion of the eyesight or hearing faculties, preferably without permanent effects.

A knockout pill which can surreptitiously be administered in drinks, food, cigarettes, as an aerosol, etc., which will be safe to use, provide a maximum of amnesia, and be suitable for use by agent types on an ad hoc basis.

A material which can be surreptitiously administered by the above routes and which in very small amounts will make it impossible for a man to perform any physical activity whatsoever.

At the end of this 1955 CIA document, the author [unnamed] makes this remark: “In practice, it has been possible to use outside cleared contractors for the preliminary phases of this [research] work…” That’s further evidence that the CIA mind control program, going forward, would rely on and use a large number of non-CIA researchers—evidence of which, as noted above, was destroyed by CIA director Richard Helms in 1973.

If you examine the full range of psychiatric drugs developed since 1955, you’ll see that a number of them fit the CIA’s agenda.

Speed-type chemicals, which addle the brain over the long term, to treat so-called ADHD.

Anti-psychotic drugs, to render patients more and more dependent on others (and government) as they sink into profound disability and incur motor brain damage. Dr. Peter Breggin, author of Toxic Psychiatry, places the number of Americans whose brains have been damaged by these anti-psychotic drugs at 300,000, at minimum.

The SSRI antidepressants, like Prozac and Paxil and Zoloft, which produce extreme and debilitating highs and lows—and also push people over the edge into committing violence.

Tranquilizers, which debilitate the thinking process for millions of users.

And now, using the pretext of lone-shooter mass violence (Aurora, Sandy Hook, etc.), the US government, out in the open, is funding massive research to “map the brain,” in order to…what?

Control the brain. “Return it to a state of normalcy.”

Meaning: create a society in which obedience to authority is the prime human value.

Every day, the neuro-psychiatric establishment is making the CIA’s 1955 dream come true.

MKULTRA mind control dead and buried? Not a chance.