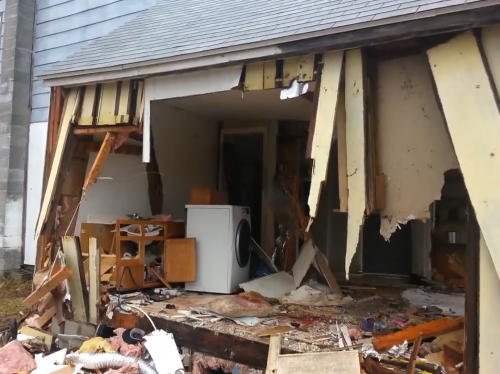 Just a few days after Christmas, the Sheriff’s Department in Tompkins County, New York issued an arrest warrant for David M. Cady after he failed to show up to court for a DUI. But once the police arrived at his home, he refused to go with them after explaining that he was afraid to go to jail. After letting his wife and two sons leave, Cady barricaded his home, and endured a 60 hour siege led by hundreds of police officers from 18 departments.

Over the course of the siege, the police attempted to negotiate with Mr. Cady, and at least one shot was fired from the home towards a patrol car. Though it is unclear if this action was a malicious attempt to hurt the police officers surrounding his home, or if it was an impulsive act of desperation to scare them away (given the reason for his warrant, it wouldn’t be surprising if Mr. Cady had been drinking when he fired the shot).

Either way, it’s clear that the police had every reason to be concerned for their safety at that point. Despite this, it appears that they still intended to resolve the situation peacefully, and arrest Mr. Cady without incident. If they really wanted to hurt him, they could have stormed in with all guns blazing. Instead, they decided to “breach” the home, so that they could finally get a hold of Cady. And by breach I mean, they completely wrecked the house beyond all repair.

As you can see, it looks like the house just barely survived a hurricane. Every time you think you’ve seen the last of the destruction, there’s still more to be seen. How many freaking holes did they really need to put in that house?

And in the end, Mr. Cady committed suicide before he could be apprehended. Now his wife and kids are left with no father, and the shell of a house that is completely unlivable. While I think the police aren’t solely responsible for what happened, there had to have been a better way right?  During the course of this three day siege, the police had plenty of time form a plan to apprehend Mr. Cady, and yet they chose the most destructive way possible to breach that house.

What do you think? Was this an appropriate response to Cady’s resistance, or was there a better way to apprehend him?