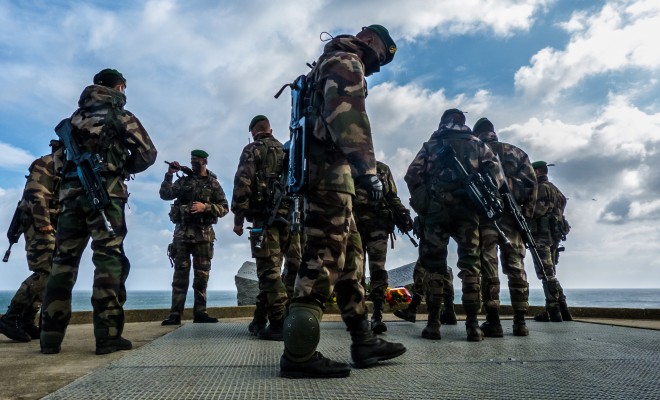 FRANCE (INTELLIHUB) — Like a scene out of Nazi Germany, French Defense Minister Jean-Yves Le Drian announced Tuesday that 10,000 Army troops will be deployed into the streets to secure “sensitive points” in wake of the recent shooting attacks which left 17 dead.

Never before in history have troops been deployed in France to such magnitude, as a few bad apples are now to blame for ushering in a new wave of tyranny into the country.

Reports say that nearly 5,000 of the 10,000 troops will be deployed to Frances “Jewish schools” and synagogues and neighborhoods.

All of this comes following a hole in security as two of the ‘Charlie Hebdo’ shooters were on a no-fly list and were already flagged by authorities before the attacks, begging the question: Did France allow the attacks to happen to ascertain martial law?

Although accomplices of the attack are said to be on the loose most would agree that deploying 10,000 troops onto the streets is a drastic measure, further stripping freedom from French citizens who have just encountered their very own version of the 9/11 narrative.

Additionally it’s not yet known why so many troops are being deployed onto French soil as the number of accomplices to the attacks are virtually unknown at this time, but likely only add up to a few in number. Now some are wondering why the deployment is so massive, worrying that a massive event may be looming on the horizon, known by French security, not yet announced to the public.

The highest level of terror alert currently remains in effect during what is being called a “national security crisis”, allowing the French government to operate with impunity inside French borders.

Residents of France prefer to “live freely” but appreciate the “soldiers” presence after the media hyped the fear to a whole new level, according to reports.

After all over 3000 people a year die in automotive accidents in France every year, so all in all, 17 shooting deaths is essentially a drop in the bucket overall. By using that rational maybe France should ban automobile travel altogether.

In reaction to the attacks millions of people have taken to the streets over the past few days showing solidarity for the dead including over 40 heads of State and world leaders. However, U.S. President Barack H. Obama, pledging allegiance to the Muslim world was a ‘no-show’ despite public criticism.

The troops will be deployed Tuesday night, under the cover of darkness, amidst new terror threats from ISIS, a C.I.A. backed terror group.