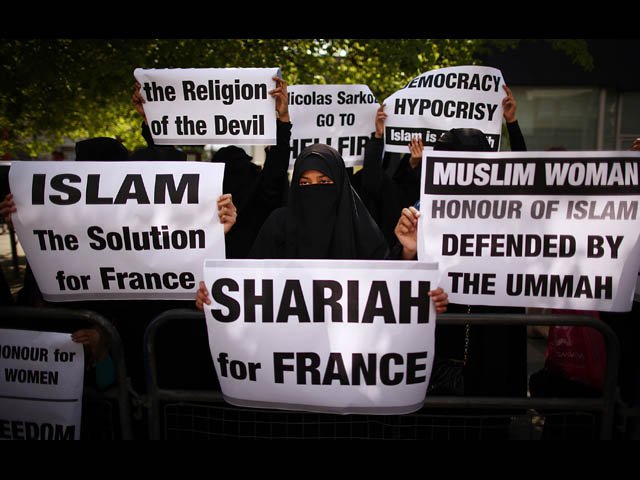 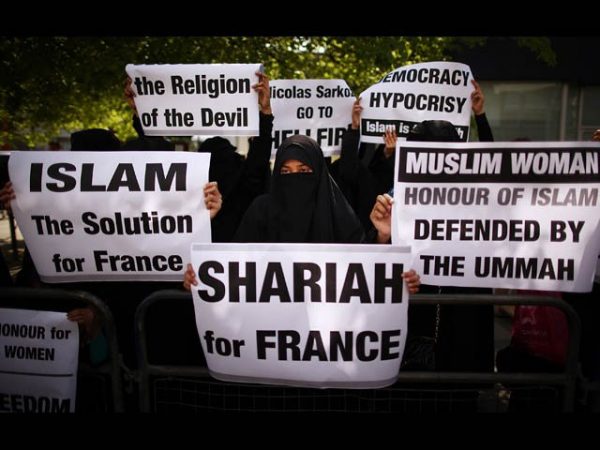 So, while watching the evening news, I see the French citizens out marching in the streets holding hands, singing and carrying banners that say “Not Afraid.” That’s all well and good, but here’s a thought…kick the Muslims out of your country and your problems will be solved. The French are finally seeing what multiculturalism and political correctness are really all about. They have allowed invaders to legally immigrate to their country, set-up their own separate system of government, and even go so far as to allow “infidel free zones” where only Muslims are allowed to be.

How stupid is that?

Multiculturalism and political correctness are going to be the reason that Europe will fall to the Muslim hordes without a single shot being fired. The birth rate of Muslim immigrants is almost 5 to 1, so within another generation or two, all European countries that have large Muslim populations will literally out-breed white Europeans, and the indigenous population will be a minority within their own countries. I guess we here in America shouldn’t be pointing the finger at Europe or criticizing them too badly, for the exact same thing is happening here in the United States. Only the majority of those “immigrants” aren’t really “immigrants” at all, but in reality are illegal aliens. Barack Obama’s open border policies have all but insured that we will soon be facing the exact same problems that Europe is now seeing.

How long before there are “Muslim Only Zones” right here in the United States? It’s a fact that the majority of Muslim immigrants here in America want to institute Sharia Law within their communities. And as the world has come to see, Sharia Law does not do well with any kind of “freedom.” It is one of the most violent and oppressive systems of law on the entire planet. You see, that is what “multiculturalism” and political correctness is all about—it does not bring people together, but instead separates them even further. By allowing a certain group of immigrants to set-up their own society within a society, you destroy the very fabric of your nation. There should be only one system of law—not two or more.

I’m afraid that it’s all over for Europe, and that’s a crying shame too. If they had simply showed some backbone and made immigrants assimilate into their society, they wouldn’t have the problems they now face. And they can’t just say, “Okay all of you immigrants, you aren’t allowed to have separate communities and a separate system of law from now on.” If they did, they would have a war on their hands and they know it, so I guess we can kiss the French nation goodbye within two more generations.

By not making all immigrants assimilate into the country they emigrate to, a nation is setting themselves up for disaster. Not right at that moment, but within 3 or 4 generations.

Take heed, America, because it is already happening here. When you go to the store and see two languages on the signs on the aisles, what does that tell you? I thought “English” was our national language…not Spanish.