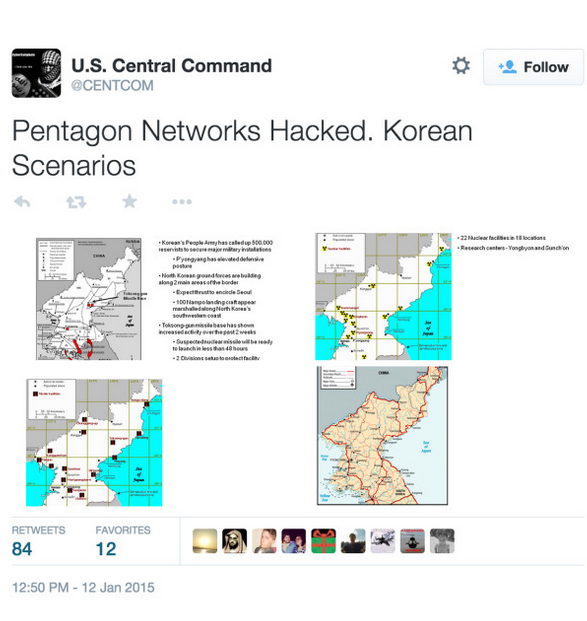 Could it really get any more convenient than this?

Via The Washington Free Beacon:

Hackers with the Islamic State, also known as ISIS or ISIL, posted links on U.S. Central Command’s official Twitter page to what it claimed was “confidential data from your mobile devices.”

“ISIS is already here, we are in your PCs, in each military base. With Allah’s permission we are in CENTCOM now,” said one tweet sent from CENTCOM’s account.

“AMERICAN SOLDIERS, WE ARE COMING WATCH YOUR BACK,” one tweet stated.

So the hack attack just so happened to come JUST as President Obama was addressing the nation on, what else? Cyber security.

Really? How serendipitous. In fact, if you look serendipitous in the dictionary, this situation might be in there as a textbook example.

Obama is expected to address cyber security again at the State of the Union where he is set to continue drumming up support for two new pieces of legislation on cyber security he is about to propose.

And now he’s telling Americans that these attacks pose a “direct threat to the economic security of American families.”

Wired reported, “The president cited the recent hacks at Target, Home Depot and Sony as primary reasons why Congress should pass the Personal Data Notification and Protection Act. The bill would help unify a multitude of state breach laws that currently exist. Lawmakers have tried for nearly a decade to pass a federal bill to replace the patchwork of state laws, but have repeatedly failed, in part because either the laws didn’t go far enough or went too far.”

So for ten years they’ve wanted to pass more federal laws to replace state laws, but they haven’t been able to — now the Sony hack (which looks like a psyop) and the oh-so-timely CENTCOM hack — and bam — more laws?

(Pray tell…what all is in those bills, anyway? Anyone read the fine print yet?)

This is classic Hegelian Dialectic problem-reaction-solution for another government power grab.

I mean, the writers of Wag the Dog couldn’t make this stuff up. Or maybe they could, because it really seems like they did.

The president will also be talking to the Department of Homeland Security on Tuesday about even more ways the nation can defend itself against cybercrime… Considering that everything Homeland Security does seems to take a little more of our liberties in exchange for security (theater), this ought to be good.

…former NSA and CIA director Michael Hayden went on cable news on Thursday morning to use the Charlie Hebdo attack as an excuse for why the program was so useful. After spending about four minutes talking about how these kinds of random small attacks are likely to be the new way terrorists attack, he then defends metadata collection:

Let me add another thought here too: You know, I was talking to you guys about 12 months ago, about these massive amounts of metadata that NSA held in storage. That metadata doesn’t look all that scary this morning and I wouldn’t be surprised if the French services pick up cell phones associated with the attack and ask the Americans, ‘where have you seen these phones active globally?’.

Actually, no, that metadata does still seem pretty scary, because it also includes a hell of a lot more than just those responsible for the attack. And, it’s not like law enforcement and the intelligence community can’t go back to the operators currently responsible and ask them for that data. There’s still no reason to believe that the NSA needs to just be sitting on this data all the time. And, of course, it doesn’t seem like all that metadata helped prevent any attack, now did it? [emphasis added]

So while they are calling for even more surveillance state spying on Americans, even more unconstitutional collection of our data, at the same time they admit they cannot protect anyone’s data… so please give them more laws and power?

And remember kids: hacking is bad when it happens to Sony, but totally fine when the CIA does it to the Senate Intelligence Committee.