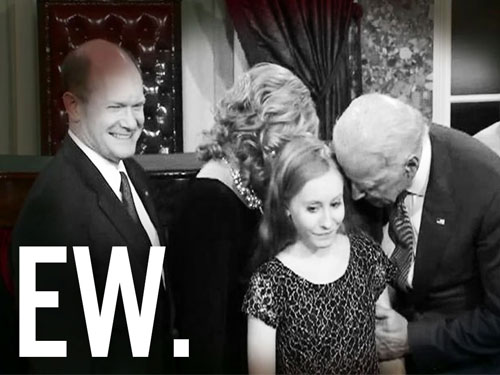 If you had a chance to watch the senatorial swearing-in ceremonies last week on CSPAN (like hardly anyone did), you may have noticed how utterly creepy Vice President Joe Biden acted around people’s children.

The whole overly touchy-feely scene, now dubbed “going Biden” in the media — as if giving it a cutesy name makes it okay or any less creepy — was questioned in several news outlets including The Christian Science Monitor who asked, “Joe Biden swearing-in behavior: Kindly or creepy?”

In fact, creepy was the word-of-the-day that day.

“It’s not that big of a deal, I guess, but it got kind of creepy,” Mollie Hemingway at The Federalist wrote. Lots of people who watched the ceremony unfold agreed with her.

Mary Katharine Ham wrote, “I know he has a voting record and a party identification that make this kind of behavior suddenly charming and eccentric instead of creepy,” in Hot Air’s “Can we talk about how Vice President Joe Biden is being inappropriate?”

At one point, Biden was whispering something to Sen. Chris Coons’ (D-Del) 13-year-old daughter really close and she pulled away when he went in for a kiss on her cheek.

It got so creepy and that creepy got so much coverage that Senator Coons had to publicly address it:

Obviously they want damage control, because the Senator’s response story that this wasn’t creepy peppered every mainstream outlet, getting more media coverage than the original creepy story itself.

All due respect Senator, but the video says otherwise and obviously if enough people felt it was creepy that you had to publicly address it in the mainstream media, that speaks volumes. The video speaks for itself. Your daughter didn’t even want to stand by our Vice President in the first place…

But it wasn’t just Coons’ daughter that got creeped on. Watch the video below.

Other highlights include always making basically every little kid stand right directly in front of him even when they wanted to stand somewhere else, telling several daughters “No serious guys till you’re 30,” and calling everyone “baby.”

He even seemed to creep out one Senator’s mom after leaning in real close and touching her face.

“I like kids better than people,” Biden exclaimed at one point.

Joe Biden is like that creepy uncle you avoided at family reunions as a kid. Seriously.

Not sure what else to say other than, “This is your Vice President, America.”

To watch the full swearing covered by CSPAN, check out this video Mox News aptly titled, “Starring JOE BIDEN! As Your Creepy Uncle That Wont Stop Touching You!”

can we appoint Joe Biden permanent That One Uncle of the United States for ceremonial purposes?