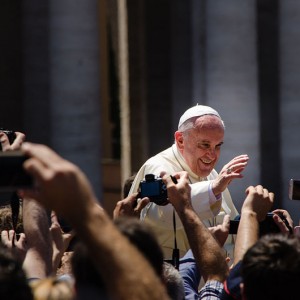 Should criticism of Islam be banned?  Should the kinds of cartoons depicting Muhammed that were published by French magazine Charlie Hebdo be against the law?  In recent days, there has been a massive outpouring of support for free speech in the western world in the wake of the Charlie Hebdo massacre.  But there have also been a few dissenting voices.  One of these dissenting voices belongs to Pope Francis.  He has publicly stated that “there is a limit” to free speech and that “you cannot insult the faith of others”.  So obviously he does not approve of the cartoons of Muhammed that Charlie Hebdo has been publishing.  By taking this kind of public stand, the Pope is going to further endear himself to the more than one billion Muslims in the world.  Since he was elevated to Pope, he has been doing more than any of his predecessors to build bridges to Islam.  So precisely why is he doing this?  Why is he working so hard to bring Muslims and Catholics together?  Could it be possible that he is laying the groundwork for a future one world religion?

To make his point that there are “limits” on free speech, the Pope referred to one of his close assistants during a conversation with reporters…

He referred to Alberto Gasparri, who organizes papal trips and was standing by his side aboard the papal plane.

So if we insult Muhammed, should we expect physical retaliation from Muslims?

According to Francis, this would make sense…

Recently the Vatican and four prominent French imams issued a joint declaration that, while denouncing the Paris attacks, urged the media to treat religions with respect.

Francis, who has called on Muslim leaders in particular to speak out against Islamic extremism, went a step further Thursday when asked by a French journalist about whether there were limits when freedom of expression meets freedom of religion.

“There are so many people who speak badly about religions or other religions, who make fun of them, who make a game out of the religions of others,” he said. “They are provocateurs. And what happens to them is what would happen to Dr. Gasparri if he says a curse word against my mother. There is a limit.”

Yes, Pope Francis has denounced the violence that just happened in France.

But he is also being very, very careful not to offend Muslims.  He is siding with Muslim leaders that find the caricatures published by Charlie Hebdo to be extremely offensive.  By doing so, he is winning a lot of friends in the Muslim world.

And without a doubt, this is the most politically-correct Pope that Rome has ever had.  He seems to always know exactly what to say to the press, and he has been working extremely hard to reach out to other major global religious leaders since the beginning of his papacy.

But instead of working so hard to build bridges to other religions, perhaps he should be focusing on other things.  For example, there are some horrific human rights abuses going on in the Philippines right now.  Instead of complaining about cartoons of Muhammed, this is what he should have been complaining about…

Street children as young as five are being caged in brutal detention centres alongside adult criminals in a cynical drive to smarten up the Philippines capital ahead of a visit by Pope Francis this week.

Hundreds of boys and girls have been rounded up from doorways and roadsides by police and officials and put behind bars in recent weeks to make the poverty-racked city more presentable when Pope Francis arrives tomorrow, a MailOnline investigation has found.

In a blatant abuse of the country’s own child protection laws, the terrified children are locked up in filthy detention centres where they sleep on concrete floors and where many of them are beaten or abused by older inmates and adult prisoners and, in some cases, starved and chained to pillars.

Perhaps Francis will say something about that.

But what we can expect for sure is for this Pope to continue to reach out to Muslims.  What Pope Francis has done so far during his papacy has angered many Catholics and has thrilled many Muslims.  As I have written about previously, he even took the unprecedented step of authorizing “Islamic prayers and readings from the Quran” at the Vatican for the first time ever last year.

Meanwhile, Islamic terror continues to get even worse all over the globe.  Almost every single day now there are more stories of crucifixions and beheadings by ISIS.  The following is just one example…

ISIS has continued its barbarism, executing five men in Deir Ezzor, an eastern province of Syria, on Wednesday, Jan, 14.

Two men were shot for “dealing with the Nusayri [Alawite] regime,” and a third was beheaded. Then all three were crucified, and they will remain so for three days for “establishing a cell to fight IS,” according to the Syrian Observatory for Human Rights.

ISIS forces then murdered a university student who was accused of being an “informant for the Nusayri regime.” This student had already been detained on the charge of “smoking.”

A politically-correct approach is not going to end this violence.

I like the way that Mark Christian, a former Muslim and the son of a high-ranking Muslim Brotherhood leader in Egypt, put it the other day…

The circumstances we face are dire and we have no coherent way of addressing it until we establish the stark, bright line between Muslims who are willing to respect the religious liberty of others (which must absolutely require the abandonment of vengeance over insults, perceived or real) and those who count us as so many cattle, ripe for slaughter and easily led.

Our society can no longer afford to self-censor when it comes to the “hair trigger” that is Islam. Muslims of the former type I described above may be offended, and for this I am sympathetic; but Muslims of the latter type will become enraged and will reveal to all the depth of their incompatibility with civilized society. This is my aim: to force these Muslims to expose their unacceptable radicalism for all to see, but also to reach a self-realization of the depravity of that radicalism that exists within themselves.

Being offended is uncomfortable for sure, but it is nothing compared to being hunted and subjugated, which is the lot our Christian brothers and sisters in Muslim-dominated lands endure, and as we saw in Paris, and increasingly in our own Western democracies. The source of this is a foolish adherence to the idea of “multiculturalism,” enforced by a misguided political correctness. I believe you would heartily agree that there is no verbal insult, nor cartoon that would move you to murder. However, hundreds of millions of Muslims worldwide disagree.

Radical Islam is just another form of tyranny.

If you detest government tyranny, you should also detest the radical Islamic movement which seeks to force the entire planet to submit to Islam and to live our entire lives under strict sharia law.

Unfortunately, this movement continues to grow by leaps and bounds.  In fact, thanks to Nancy Pelosi, a radical Muslim is about to be appointed to the House Intelligence Committee…

House Minority Leader Nancy Pelosi is set to appoint a Muslim lawmaker to the Intelligence Committee, congressional aides said Tuesday, giving him access to some of America’s most closely held secrets in the war on terror.

The move will come as the world is still grappling with an al-Qaeda death squad’s massacre last week of journalists at the French satire magazine Charlie Hebdo, executed because they had published a cartoon of the Muslim prophet Muhammad.

Rep. André Carson has attracted suspicion for his public statements, including a 2012 Islamic Circle of North America convention where he said America’s schools should be modelled after Qur’anic madrassas.

Moments later he warned undercover law enforcement skulking around the event looking for ‘secret meetings’ that ‘Allah will not allow you to stop us.’

Courtesy of The End of the American Dream blog.