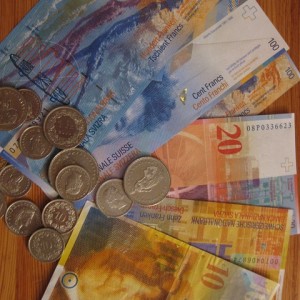 Central banks lie.  That is what they do.  Not too long ago, the Swiss National Bank promised that it would defend the euro/Swiss franc currency peg with the “utmost determination”.  But on Thursday, the central bank shocked the financial world by abruptly abandoning it.  More than three years ago, the Swiss National Bank announced that it would not allow the Swiss franc to fall below 1.20 to the euro, and it has spent a mountain of money defending that peg.  But now that it looks like the EU is going to launch a very robust quantitative easing program, the Swiss National Bank has thrown in the towel.  It was simply going to cost way too much to continue to defend the currency floor.  So now there is panic all over Europe.  On Thursday, the Swiss franc rose a staggering 30 percent against the euro, and the Swiss stock market plunged by 10 percent.  And all over the world, investors, hedge funds and central banks either lost or made gigantic piles of money as currency rates shifted at an unprecedented rate.  It is going to take months to really measure the damage that has been done.  Meanwhile, the euro is in greater danger than ever.  The euro has been declining for months, and now the number one buyer of euros (the Swiss National Bank) has been removed from the equation.  As things in Europe continue to get even worse, expect the euro to go to all-time record lows.  In addition, it is important to remember that the Asian financial crisis of the late 1990s began when Thailand abandoned its currency peg.  With this move by Switzerland set off a European financial crisis?

Of course this is hardly the first time that we have seen central banks lie.  In the United States, the Federal Reserve does it all the time.  The funny thing is that most people still seem to trust what central banks have to say.  But at some point they are going to start to lose all credibility.

Financial markets like predictability.  And gigantic amounts of money had been invested based on the repeated promises of the Swiss National Bank to use “unlimited amounts” of money to defend the currency floor.  Needless to say, there are a lot of people in the financial world that feel totally betrayed by the Swiss National Bank today.  The following comes from an analysis of the situation by Bruce Krasting…

Thomas Jordan, the head of the SNB has repeated said that the Franc peg would last forever, and that he would be willing to intervene in “Unlimited Amounts” in support of the peg. Jordan has folded on his promise like a cheap suit in the rain. When push came to shove, Jordan failed to deliver.

The Swiss economy will rapidly fall into recession as a result of the SNB move. The Swiss stock market has been blasted, the currency is now nearly 20% higher than it was a day before. Someone will have to fall on the sword, the arrows are pointing at Jordan.

The dust has not settled on this development as of this morning. I will stick my neck out and say that the failure to hold the minimum rate will result in a one time loss for the SNB of close to $100B. That’s a huge amount of money. It comes to 20% of the Swiss GDP!

Most experts are calling this an extremely bad move by the Swiss National Bank.

But in the end, they may have had little choice.

The euro is falling apart, and the Swiss did not want to be married to it any longer.  Unfortunately, when any marriage ends the pain can be enormous.  The following comes from CNBC…

How do you know you’re looking at a bad marriage?

Well if one or both of the spouses can’t wait to get out as soon as the smallest crack in the door opens, you have a pretty good clue.

Something like that just happened in Europe as we learned the real reason why so many traders were still invested in the euro: They had nowhere else to go.

As the Swiss National Bank unlocked the doors on its cap on trading euros for Swiss francs, the rush to exit the euro was faster than one of those French bullet trains.

But this move has not been bad for everyone.  In fact, for many of those that live in Switzerland but work in neighboring countries what happened on Thursday was very fortuitous…

“I heard the news this morning. I’m so happy!” Vanessa, who refused to give her last name, told AFP outside of one of many mobbed exchange offices in Geneva.

She has reason to be extatic: she is one of some 280,000 people working in Switzerland but living and paying bills in eurozone countries France, Germany or Italy.

These so-called “frontaliers”, or border-crossers, are the biggest winners in Thursday’s Swiss franc surge, seeing their incomes jump 30 percent in the blink of an eye.

In normal times, things like this very rarely happen.

This move by the Swiss National Bank is just the beginning.  Expect more desperate moves on the global economic chessboard in the days ahead.  But in the end, none of those moves is going to prevent what is coming.

And one of these days, another extremely important currency peg is going to end.  Right now, the Chinese have tied their currency very tightly to the U.S. dollar.  This has helped to artificially inflate the value of the dollar.  Unfortunately, as Robert Wenzel has noted, someday the Chinese could suddenly pull the rug out from under our currency, and that would be really bad news for us…

In other words, the SNB is no People’s Bank of China type patsy, where the PBOC has taken on massive amounts of dollar reserves to prop up the dollar.

Will the PBOC learn anything from SNB? If so, this will not be good for the US dollar.

So keep a close eye on what happens in Europe next.

It is going to be a preview of what is eventually coming to America.