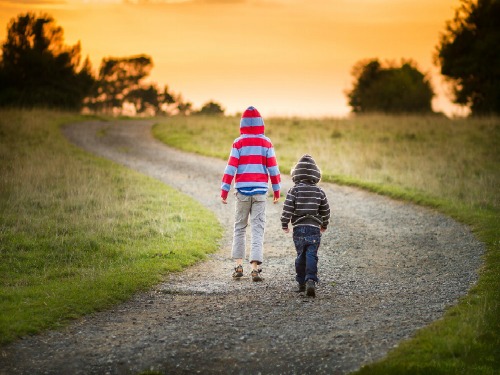 By all appearances, Danielle and Alexander Meitiv are smart, responsible parents who want to instill independence in their children. They don’t like to throw caution to the wind, but they do believe that kids should be granted some freedom, so that they may learn how to take care of themselves from an early age.

They practice what’s known as “free range parenting” as opposed to hovering over their kids and showering them with fear and paranoia like most parents do these days. Unfortunately, their attempts to instill responsibility and self-reliance in their children has met with resistance from the society they live in.

Last December, Danielle and Alexander Meitiv ran afoul of the nanny state, when they had the gall to allow their children to walk home alone from the park. “We wouldn’t have let them do it if we didn’t think they were ready for it” they claimed. What they didn’t realize was that in America, the state knows what’s best for children, parents be damned.

“The world is actually even safer than when I was a child, and I just want to give them the same freedom and independence that I had — basically an old-fashioned childhood,” she said. “I think it’s absolutely critical for their development — to learn responsibility, to experience the world, to gain confidence and competency.”

On Dec. 20, Alexander agreed to let the children, Rafi and Dvora, walk from Woodside Park to their home, a mile south, in an area the family says the children know well.

The children made it about halfway.

Police picked up the children near the Discovery building, the family said, after someone reported seeing them.

The Meitivs say their son told police that he and his sister were not doing anything illegal and are allowed to walk. Usually, their mother said, the children carry a laminated card with parent contact information that says: “I am not lost. I am a free-range kid.” The kids didn’t have the card that day.

Yes, you read that right. Some ex-stasi busybody couldn’t stand the sight of children roaming the streets without their leashes and dog tags, and reported them to the police. I’m not sure what’s more offensive; the fact that this person thought that kids can’t walk alone in broad daylight, or the fact that he or she thought she could use the police as her personal truancy squad. Surely they have something better to do than rounding up wayward children?

What’s even more infuriating is how the police responded to the incident. When you live in a nanny state, the government talks down to parents like they’re the children.

Alexander said he had a tense time with police on Dec. 20 when officers returned his children, asked for his identification and told him about the dangers of the world.

As you might have guessed, that wasn’t the last of it. It never is when you’re dealing with the horde of busybodies that run our society. They are relentless. Not only do they treat your home like they own it, but they will hound you and your family, no matter where you are.

The Meitivs say that on Dec. 20, a CPS worker required Alexander to sign a safety plan pledging he would not leave his children unsupervised until the following Monday, when CPS would follow up. At first he refused, saying he needed to talk to a lawyer, his wife said, but changed his mind when he was told his children would be removed if he did not comply.

“It seemed such a huge violation of privacy to examine my house because my kids were walking home,” she said.

This week, a CPS social worker showed up at her door, she said. She did not let him in. She said she was stunned to later learn from the principal that her children were interviewed at school.

Unfortunately, this isn’t an isolated case. Last September a mother from Austin was hounded for letting her 6-year-old son play outside a mere stone’s throw away from her house. And this case from Maryland is remarkably similar to what the Meitiv parents are dealing with.

It always starts with a tattling busybody reporting your kids, which then escalates to a visit from the police, who then call Child Protective Services. They’ll provide you with a “safety plan” that you’ll need to sign, and if you refuse to do so they’ll take your kids away on the spot. They’ll proceed to interview your children without your permission or presence, and they’ll continue to break you down and investigate every aspect of your life until they are satisfied.

And if they aren’t satisfied? Good luck. Your your kids now belong to the state, where they will be pumped full of psychotropic drugs, and possibly sent to a foster home inhabited by known sex offenders. And all while they completely fail to investigate and prevent real cases of child abuse.

This is the system we live in. Where raising your children in a healthy environment, and teaching them to be independent, means they might be kidnapped by the government to be drugged and raped. If you ask me, Child Protective Services should be renamed the Child Predator Service, because that’s the only thing they’re good at. Preying on our children.