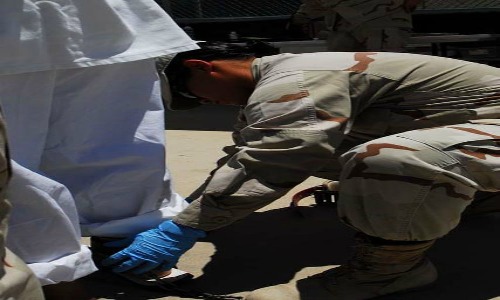 Army Staff Sergeant Joseph Hickman joined the Marines in 1985 and was on duty when three detainees held at a black site in Guantanamo Bay supposedly committed suicide. He insists the official version of events is impossible.

In an interview with Vice News Hickman explained why he thinks the suicide version of events is impossible:

“They would have had to all three tie their hands and feet together, shove rags down their throats, put a mask over their face, made a noose, hung it from the ceiling on the side of the cellblock, jumped into the noose and hung themselves simultaneously,” he said.

He was on duty at Camp Delta on June 9, 2006 and saw a high-security vehicle arrive three times. On each occasion, it left containing a prisoner, turning left onto a road that lead to only two places, the beach or the CIA holding center.

On returning to the camp sometime later, the vehicle went directly to the medical facility and within ten minutes floodlights came on and sirens were wailing. The three men were dead.

Hickman approached the Department of Justice in 2009, but the authorities issued a denial of any wrongdoing. Since then, reports of what happened at Gitmo have started to surface, reports that the CIA have tried to prevent reaching the public domain. These reports point to the CIA using torture, degradation and violence to achieve their goals, the same reports suggest that these techniques rarely yield reliable intelligence.