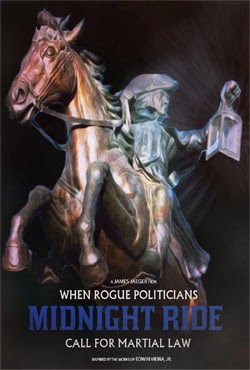 Even the perennially blind are beginning to notice the police and surveillance state that has been quietly built around us since 9/11. We have seen de facto martial law declared following the Boston Marathon bombing, and any other place where an isolated incident or threat of an incident will trigger enhanced security measures such as checkpoints, curfews, pre-crime arrests and widespread police brutality. Couple this with onerous legislation like the PATRIOT Act and the NDAA, and one must conclude that warnings about tyrannical military rule inside the United States is no longer a far-fetched conspiracy theory.

Midnight Ride — the sister film to Molon Labe — explores what would happen if the dollar crashed taking the world financial system down with it. How would this police state be used in the ensuing mass civil unrest? Would martial law be openly declared? If it were, would this be constitutional? Should such martial law be obeyed? The concerned citizen should be asking these questions.

Midnight Ride was inspired by the book, By Tyranny Out Of Necessity: The Bastardy of Martial Law by Edwin Vieira, Jr. The film explores the nature of martial law and how it relates to the Second Amendment and militia clauses in the U.S. Constitution. Moreover, the film looks to history as a  consistent guideline for what happens when economies crash and governments use the crisis to impose authoritarian rule.

Please watch the trailer below for Midnight Ride.

The film was produced by James Jaeger and features interviews with: