“To announce that there must be no criticism of the President, or that we are to stand by the President, right or wrong, is not only unpatriotic and servile, but is morally treasonable to the American public.”
– former President Theodore Roosevelt

Isn’t it more than a bit odd that after the Charlie Hebdo targeted assassinations, the thwarted terrorist attacks in Belgium, major European cities seeing armed soldiers on every corner, and as country after country raises their terrorist threat levels almost daily, Europe still has NOT addressed the issue of stopping all muslim immigration into their countries? NOT the way to live folks, especially when the solution is so simple…close the borders completely and then round-up the muslims who are there and ship them back to the cesspools they came from.

Easier said than done I guess, yet it is the only viable solution to stopping the hell now encasing Europe…a hell soon to be here in America as well because NOT one damn person in power is doing anything to stop it.

And rest assured that coming soon will be America’s own version of Europe’s ‘No-Go’ zones (France itself has 751 of what they call ZUS… ‘Sensitive Urban Zones’ and the Netherlands has over 40)…basically muslim-only areas within a given city that said host country has relinquished their legal control of and given it over to muslim control. And these European ‘No-Go’ zones function as microstates complete with sharia religious-law courts (Britain alone has 85 such courts), sharia government, sharia anything but justice, and sharia dictated punishment for perceived crimes that NEVER happened. Remember also that sharia law says that any speech or thought a muslim finds offensive is slanderous, and slander under sharia law is a crime punishable by death…as in the Charlie Hebdo massacre.

And know these ‘No-Go’ zones are of our…the West’s…own doing due to political correctness run amok. Minding our political P’s and Q’s have given muslims the ability to create so-called ‘parallel societies’ and remain segregated unto themselves rather than becoming integrated into their European host nations society…basically translating into Europe losing its unique identity and dying from multiculturalism because islamic supremacists refuse to assimilate into Western culture…with antagonism towards their host countries always present. Instead they carve out a notch in a chosen neighborhood, and then through intimidation or outright violence, force out those… the infidels…along with what they consider secular values that are NOT acceptable to them…as they deem those values to be man-made laws NOT islamic laws as set down in the (anything but holy) qur’an.

And if it happened Europe it can and…with Obama as our president…will happen here within these last two years he has in office. 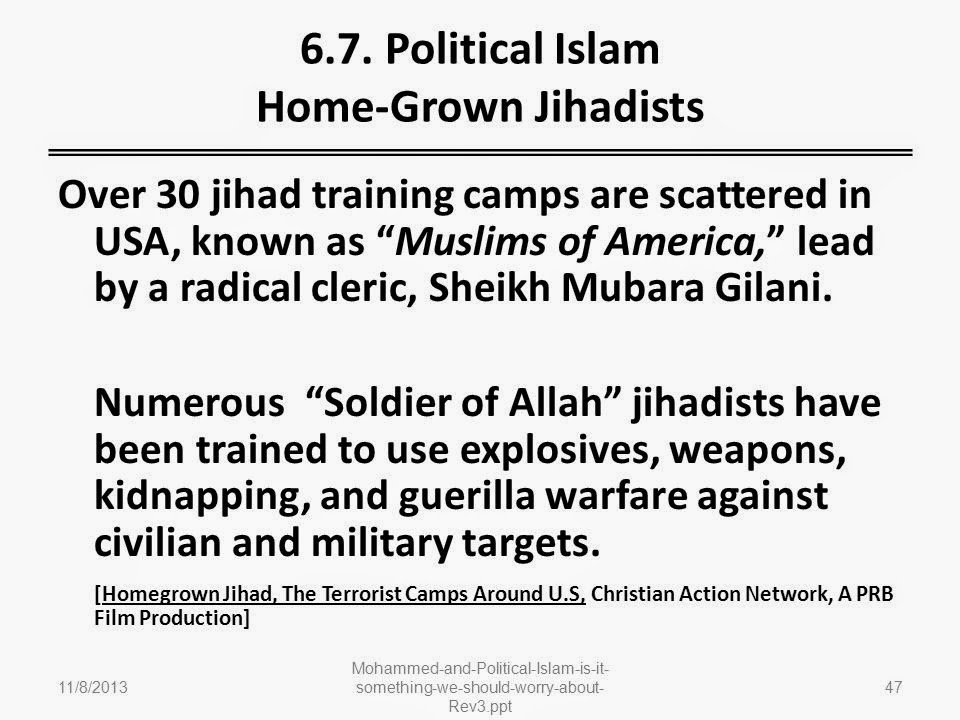 And with jihadist terror training camps already in existence and operational across America…and don’t think for a minute that they’re NOT here… this becomes the islamists logical next step in turning our beloved America into part of their so-wanted worldwide caliphate…and they will do so with Obama’s help…of course…as he looks away and does NOTHING to stop these zones from becoming a sad part of America’s new reality.

In fact, to some degree these zones are already here…case in point being Dearborn, Michigan, one of the few places in the U.S. where one can actually hear the ‘call to prayer’ publicly over a loudspeaker. And lest we forget, Dearborn is the home to The Islamic Center of America…the largest mosque in the U.S. to date.

And know that Michigan itself has the largest muslim population in America and the second largest Arab population outside of the Middle East, with Dearborn in specific having the second ‘densest’ (more people per square mile) Arab community outside of the Middle East. And muslims have immigrated to Dearborn in such large numbers that the city is now roughly 46% muslim (mostly but NOT all shi’ite) leading to what amounts to a cultural invasion of the city to the point where non-muslims are NOT welcome and the non-muslims still living there are treated as second class citizens. And Dearborn is most definitely a precursor…a test case if you will…to an actual ‘No-Go’ zone being in effect here in our country.

And with pockets of wealthy terrorist groups such as al-Qaeda, Hamas, Hezbollah, and the Muslim Brotherhood fully ensconced in cities all across Michigan know it’s just a matter of time before they monetarily outwardly help and encourage Dearborn to officially become America’s first ‘No-Go’ zone.

And with America’s politicians, elected officials, and lawyers turning a blind eye to this…as they acquiesce to political correctness once again… they are allowing muslims and terrorist groups such as these to use our Constitution’s First Amendment to hide behind as they continue to act, shall we say, very badly. And with Obama now bringing in up to 75,000 Syrian muslim islamists into our country over the next five years, without approval from Congress I might add, the chance that ‘No-Go’ zones becoming a reality have increased ten-fold. In fact, the Islamic Association of North Texas has plans on the drawing board for a so-called ‘Islamic Village Project’ to be built in Dallas, Texas. And with the art of distraction being used and honed to a fine art by the main stream media in their effort to force us to look the other way while this and other ‘No-Go’ zones slowly creep into the fabric of our American society, you just know that if left unchecked the muslims will win by simple default.

And if we allow these muslim barbarians…the true number one threat of our time I might add…to gain and establish ‘No-Go’ zones here in America we as a Judeo-Christian nation, in a short period of time, will cease to exist. And just like as in Europe it will happen through mass unchecked immigration, through our unsealed southern border, and through the actions of a president who rolls out the welcome mat for them…after all they are his blood brethren.

So the bottom line is this…we must as patriotic Americans NOT only criticize this president but hold his feet to the fire…in his case to the fires of hell…and demand that NOT even one ‘No-Go’ zone be allowed here in America because one leads to two, two leads to four, and so on down the line. And most importantly we must remove…we must purge… islam from our country…or we will become Europe complete with all the problems they are currently facing. And we must do it now before it’s too late…if it’s NOT too late already.