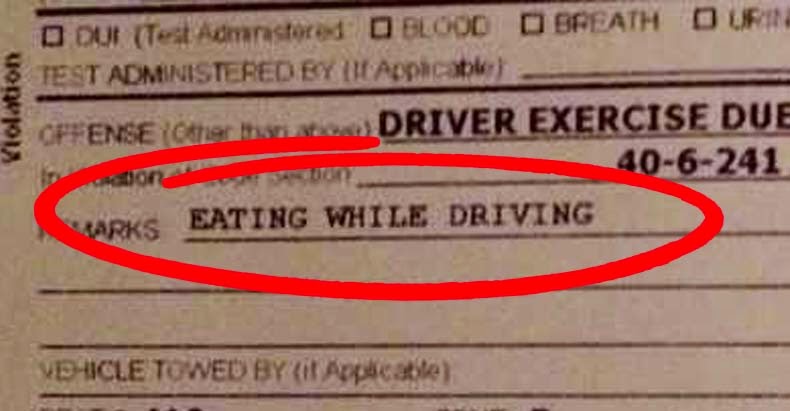 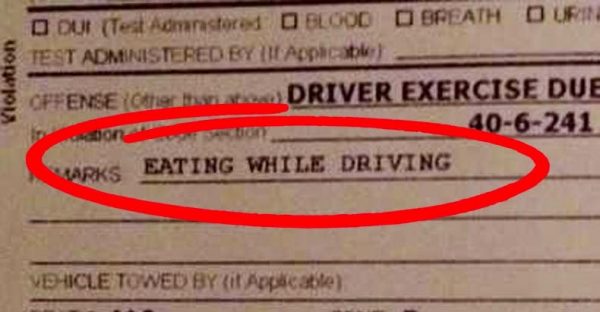 Remember back when seat belt and cell phones-in-car laws were up for debate? And people acknowledged it was safer to use the seat belt; ditch the phone, but didn’t want legislation to lead to invasive police tactics and swarms of tickets? Back when people would say things about some kind of slippery slope and say things like, what’s next, will I get a ticket for eating a french fry? Will the State say, you can’t just go down the road eating a hamburger?

Matt Turner of Alabama conscientiously drove through Marietta, Georgia last week when an officer told him, “you can’t just go down the road eating a hamburger.”

Here’s where it gets creepy: the officer had been watching him eat the burger for around two miles.

The officer explained to me that he observed me eating a burger for 2 miles, he said specifically three times, you can’t just go down the road eating a hamburger. Maybe I was enjoying the burger too much I needed to tone it down. I was certainly willing to do so but I didn’t expect to be fined or punished.

Sadly, it doesn’t appear he was being sarcastic when he said, “Maybe I was enjoying the burger too much I needed to tone it down.” No one should live in such fear of chewing, that they can’t enjoy a fry on their way home while driving safely.

So on what basis could a ticket like this even be written?

The law says that “A driver shall exercise due care in operating a motor vehicle on the highways of this state and shall not engage in any actions which shall distract such driver from the safe operation of such vehicle.”

It’s difficult not to laugh when you hear what traffic and DUI attorney William Head told WSBTV News – he found the law vague, but still hard to uphold:

If this was the law, I’d have to hire more attorneys because everybody does it including me…

I’ve only seen something like this charge when there’s an accident. There was no accident here so the fact that this man was charged with eating and driving is a first for me.

That scenario conjures images of Homer Simpson for me. Or, of police who routinely use all of their electronics while flying down the road like they’re operating the Starship Enterprise. But Jean-Luc Picard checked the view every now and then, and did not run people down by being distracted while driving.

Although Turner will fight the ticket on February 3rd, one wonders what will happen if tickets like these are upheld. Will cops abandon their normal revenue-gathering watch posts?

Will church lots, speed traps and local tavern lots be free from tire marks as cops lick their chops outside fast food joints waiting for the first one out of line who steals a french fry in motion? Will drug-sniffing dogs be trained to hit a vehicle if they smell some special sauce? Will radar guns be equipped to detect loosened sesame seeds under floor mats?

Another unfortunate result of such situations, is that they give the local news too much pleasure in demonstrating to the public how best to behave in order to keep from getting beat up, locked up or even raped by police.

A news anchor reenacts what happened to Turner and the quarter-pounder as well as the proper way to drive. They emphasize that the demonstration takes place in a parked car. Notice how she quotes the department (they wouldn’t comment on the ticket) and says, “you must exercise due care and do nothing inside your car that might make you distracted.”

Getting pulled over for the wrong reason was just upheld by the Supreme Court. Add to that, getting ticketed or jailed for absurd reasons and you have a great mass training in fearful submission. It’s beginning to look like people will have to white-knuckle it if they dare to exercise the “privilege” to travel.