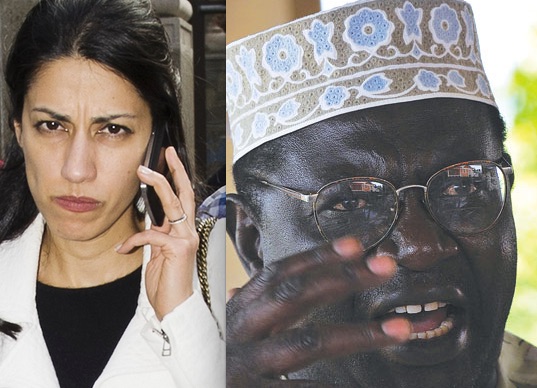 In addition to Hillary Clinton‘s close adviser Huma Abedin and Barack Obama’s brother Malik Obama both being Muslim, both appear to be the beneficiaries of illegally favorable treatment by the U.S. Government. In the case of Abedin, she was allowed to work as a Special Government Employee (SGE) for 110 days longer than is permitted by law, as Shoebat.com reported. In the case of Malik, he was able to get tax exempt status 11 months longer than is permitted by law by having Lois Lerner backdate the 501(c)(3) approval of his Barack H. Obama Foundation (BHOF) by 38 months.

As Shoebat.com has reported, Obama’s IRS appeared to kick into gear not only for Malik but on behalf of the Obama administration itself, once the New York Post reported on the formal complaint by the National Legal and Policy Center, a legal watchdog group. Malik’s dealings with Sudan, a State Sponsor of Terrorism, meant the Obama administration needed to deal with what it perceived to be a significant problem.

In 2013, ranking member of the Senate Judiciary Committee Charles Grassley (R-IA) wrote a letter to then Secretary of State John Kerry inquiring about Abedin’s employment status. In that letter, Grassley pointed out that by law, Abedin was not allowed to work as an SGE for more than 130 days.

Some weeks later, Grassley was in receipt of a response letter from Abedin’s attorney that also included a letter written by Abedin to that attorney. Here is a relevant excerpt from Abedin’s letter:

As Shoebat.com reported at the time, by her own hand, Abedin appeared to confess to committing a crime. In her admission that she worked as an SGE from June 4, 2012 – February 1, 2013, Abedin admitted to being an SGE for 240 days, 110 days more than what is permitted by law. That puts Abedin in the position of SGE when for weeks, she was being referred to in the media as deputy chief of staff to Hillary Clinton without the State Department correcting the record, as Shoebat.com reported.

There were no fewer than two significant events that took place while Abedin was working as an SGE. The first came on June 13, 2012, when Rep. Michele Bachmann (R-MN) and four other U.S. Congressmen identified Abedin by name in a letter to the State Department’s Inspectors General office. The purpose of that letter (and four other letters to four different IG’s) was to prompt an investigation into Muslim Brotherhood infiltration of the U.S. Government.

Working backward from when Abedin left the State Department on February 1, 2013, for her to work as an SGE for the legal number of maximum days, she would have begun her time on September 25, 2012 (9/25/12 – 2/1/13 = 130 days). This reality likely would have raised a red flag as a Muslim woman whose family is deeply connected to the Muslim Brotherhood. The State Department was an entity at the center of Benghazi scandal. Someone like Huma leaving State two weeks after those attacks would have been very suspicious.

This raises the possibility that Huma’s start date as an SGE may have been backdated. If it was not backdated, she risked committing a criminal act by working 240 days as an SGE, 110 days longer than what is legal. Backdating her employment status would presumably be a criminal act as well. Either way, a crime appears to have been committed and there hasn’t been much reported on this since Grassley’s initial letter in 2013.

To be clear, there is no evidence at this point that Abedin’s start date was backdated, only that she worked as an SGE longer than what is permitted legally. Why would this be so? Why not allow her to keep her existing job title and then make the switch on September 25th? Oh, yeah. That was covered already; Benghazi happened two weeks earlier.

As for the possibility that Huma’s start date may have been backdated, what better time to start work as an SGE than before Bachmann’s letter or the Benghazi attacks?

Nonetheless, the treatment Malik Obama received from the IRS clearly demonstrates that the Obama administration is not above backdating documents for the benefit of either itself, select individuals or both.