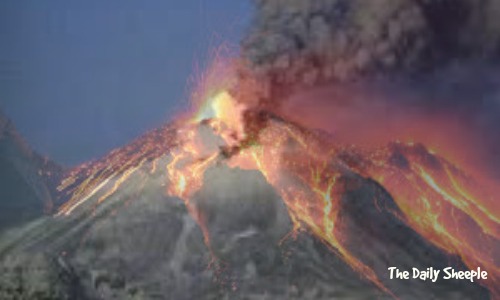 There are 41 volcanoes around the planet that are actively erupting at this moment. Some are experiencing their largest eruptions in decades.

Kilauea in Hawaii is still oozing lava and is getting very close to a highway.

The Hawaii Tribune-Herald reports an active breakout of the Kilauea Volcano lava flow that began June 27 advanced about 120 yards toward Highway 130. An update Saturday from the Hawaii County Civil Defense said the original flow front and south margin breakout remain stalled. However, a breakout along the north side of the flow remains active and has advanced downslope below an area near the stalled front. The leading edge of the breakout was 0.4 miles from Highway 130 and west of the Pahoa police and fire stations. The Civil Defense agency says dry weather is likely to keep brush fires a concern.

A Tongan volcano has created a substantial new island since it began erupting last month, spewing out huge volumes of rock and dense ash that has killed nearby vegetation, officials said on Friday. The volcano, about 65 kilometers (40 miles) northwest of the South Pacific nation’s capital Nuku’alofa, rumbled to life on December 20 for the first time in five years, the Lands and Natural Resources Ministry said. It said the volcano was erupting from two vents, one on the uninhabited island of Hunga Ha’apai and the other underwater about 100 meters (328 feet) offshore.

The ministry said experts took a boat trip to view the eruption on Thursday and confirmed it had transformed the local landscape. “The new island is more than one kilometer (0.6 mile) wide, two kilometers (1.2 miles) long and about 100 meters (328 feet) high,” it said in a statement. “During our observations the volcano was erupting about every five minutes to a height of about 400 meters (1,312 feet), accompanied by some large rocks… as the ash is very wet, most is being deposited close to the vent, building up the new island.”

It said ash and acidic rain was deluging an area 10 kilometers (6.2 miles) around the volcano, adding: “Leaves on trees on Hunga Tonga and Hunga Ha’apai have died, probably caused by volcanic ash and gases.” A number of international flights were cancelled earlier this week amid concerns about the volcano’s ash plume but they resumed on Wednesday, with authorities saying debris from the eruption was not being thrown high into the atmosphere. “Tonga, which is almost 2,000 kilometers (1,243 miles) northeast of New Zealand, lies on the so-called Pacific “Ring of Fire,” where continental plates collide causing frequent volcanic and seismic activity.

Bardarbunga volcano in Iceland has been erupting for five months non-stop making this the largest lava flow in 10,000 years. The lava is flowing at a rate of 50-70 cubic meters per second and shows no signs of stopping.

Iceland, Africa, Indonesia, The Indian Ocean, Central America, South America, The Carribean, The Pacific Islands, Japan, The Philippines and even Antarctica currently have volcanoes that are actively erupting.

According to the USGS, 50-60 volcanoes erupt EACH YEAR. Today there are 41 going off at the same time.

Obviously this isn’t a problem. We know it’s not a problem because if it was, the mainstream media would be all over it and the government would be warning us that all the volcanic activity and the gases that pump into the atmosphere may have a cooling effect on the planet.

They would be advising us that the huge amount of volcanic activity, coupled with the smallest sunspot cycle for a hundred years, means that demand for electricity may outpace supply next winter because both are proven to drop temperatures on a global scale.

They would be telling us to step up the preps, make sure we have enough food to last, show growing conditions deteriorate as they did in 1816 after Tambora erupted the previous year. Tambora was a cataclysmic explosion, but 41 volcanoes spewing out their sun reflecting gases is heading us in the same direction, and that’s without considering the lack of sunspots during the current solar cycle.

Hey, you don’t think they know but aren’t telling us do you? Do you think they could be keeping it quiet to perpetuate the myth of global warming? I mean it does bring in big bucks via green taxes.

Nah, the government is there to help us…isn’t it?