“In this time of challenge, I am asking the Prime Minister to address Congress on the grave threats radical Islam and Iran pose to our security and way of life…”

Well it seems hell has just frozen over a bit as the impossible seems to have happened…John Boehner appears to be growing a spine and it took a State of the Union Address with pages right out of the Iranian playbook to do it.

Inviting Israeli Prime Minister Benjamin Netanyahu…the world’s last great statesman…to speak before a joint session of Congress about the growing threat Iran poses to both Israel and the U.S with its unsanctioned uranium development program…and doing so without Obama’s or the State Department’s knowledge or approval…proves once again the old adage that even a broken clock…that even a RINO…is right twice a day.

And in Netanyahu’s acceptance just know that a rebuttal to Obama’s threat to veto any new sanctions Congress imposes on Iran will be a prime focus of his words…and rightly so because BiBi knows well that any deal between Iran and the U.S. will pose a direct and immediate threat to Israel as Iran defiantly continues on their goal of becoming a nuclear power. And while Iran still denies this, just days ago Israeli satellite photos showed images of a long-range intercontinental ballistic missile (ICBM) at a launch site near Tehran that could be used to deliver warheads NOT just to Israel but that could reach the U.S. as well.

And still Obama keeps insisting that new sanctions would be “harmful” to his still on going negotiations with Iran. Saying, “New sanctions passed by this Congress, at this moment in time, will all but guarantee that diplomacy fails,” but diplomacy failing is exactly what Obama wants. And all his talk that negotiations are moving forward is fooling NO one, especially Benjamin Netanyahu who knows well the simple fact that Barack HUSSEIN Obama joins in his Iranian blood brethren’s wishes to wipe his country…his Jewish country…off the map and all of Israel knows it as well. And Netanyahu knows that after Israel is gone the ‘Great Satan’ is next.

“Our diplomacy is at work with respect to Iran,” Obama said in his address, “where, for the first time in a decade, we’ve halted the progress of its nuclear program and reduced its stockpile of nuclear material.”

But…and this is a big but…Netanyahu knows well that Obama lied to the American people once again. And he knows that diplomacy…especially Obama-style diplomacy where catering to the enemy trumps protecting the country he supposedly swore allegiance to…does NOT and will NEVER work with those who want you dead.

And Netanyahu knows the truth that Obama wants kept hidden…the truth that while 20-percent enriched uranium stocks have decreased, Iran is still producing uranium enriched up to 5-percent, and that those stocks have increased especially when you add in their stocks of UF6 (uranium) and other chemical compounds. And this, in layman’s terms, means the stocks have simply been converted from one form to another. And Netanyahu knows that a major portion of said 20-percent enriched uranium stocks have been kept aside as so-called ‘scrap,’ instead of Iran’s converting it into fuel as per the first agreement. And Netanyahu knows that while NO new centrifuges have technically been installed, production of them continues, and they’re ready for installation at a moments notice.

Netanyahu knows all this and so does Obama but the difference is Netanyahu wants to stop Iran while Obama is helping Iran to become a nuclear power while trying to pull the wool over ‘We the People’s’ eyes.

And hopefully come March, BiBi will open our eyes wide to this must needed to know truth.

And when BiBi (hopefully) does speak this truth here on American soil know that Obama has already said more than six weeks out that he will NOT meet with Israel’s leader…having his ‘talking heads’ cite a supposed “long-standing practice”of NOT meeting heads of state close to their country’s general elections to avoid the appearance of influencing a democratic election in a foreign country. And Israel is scheduled to hold elections on March 17th, but you know as well as I that Obama will NOT meet with Netanyahu because he…having been blindsiding by Boehner…fears what Netanyahu will do to him when he pulls the Obama knife out of his and Israel’s back. 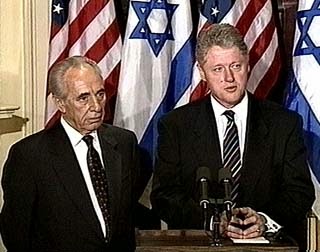 Oh and by the way, Obama’s ‘talking heads’ forget that back in 1996, one month before Israeli elections, President Bill Clinton met with Israeli Prime Minister Shimon Peres during his trip to the U.S. and was heralded for doing do.

But putting sarcasm aside with my knife in the back comment, this is yet another snub given by this White House to Israel’s leader and America’s ally, as well as being done as a form of hissy-fit retaliation by Obama for Boehner’s actions. And while Boehner’s invite will indeed result in Obama’s already tense relationship with Congressional Republicans growing even tenser, and will continue to make an ever contemptuous relationship with Netanyahu even worse, it will also afford the Americans people the opportunity to stand even stronger and more united behind the country of God’s chosen people.

And this loyalty of the American people to Israel irks Barack HUSSEIN Obama even more than anything else.

And as botox queen Nancy Pelosi puts her two cents in by slamming the invitation as ‘inappropriate” due to the timing of Netanyahu’s visit by saying, “If that’s the purpose of Prime Minister Netanyahu’s s visit two weeks before his own election, right in the midst of our negotiations, I just don’t think it’s appropriate and helpful,” you just know that what Boenher did was right on the mark. And Pelosi knows well…in fact she actually fears that Netanyahu’s speech to Congress will influence and convince those Democrats still on the fence as to why additional sanctions on Iran are indeed needed and why they are needed now… NOT tomorrow…but now.

And the fact that approving sanctions goes directly against Obama’s agenda is just the icing on the cake, with John ‘Swiftboat’ Kerry’s whining that he had to hear about Netanyahu’s visit from Boehner’s office and NOT from the usual as expected diplomatic channels is the cherry on top.

So now as we await BiBi’s critical words of warning it’s important to remember that Obama’s insisting on NO new sanctions be placed on Iran, along with his continuing to arm muslim islamic terrorists masquerading as rebels, puts the entirety of the Western world in danger. But then again his allegiance always remains with the islamic world…good little muslim that he is.