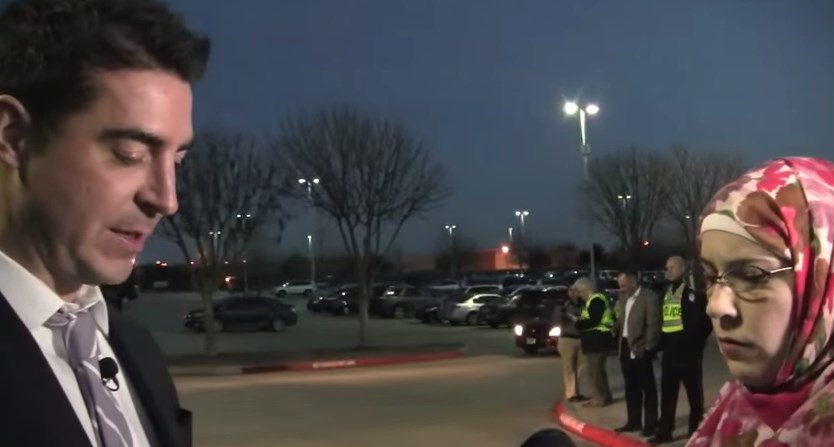 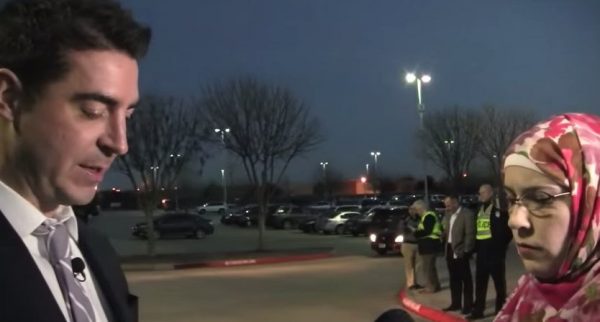 Following the Islamic jihad attacks at Charlie Hebdo offices in Paris, the Obama administration made it clear that they were going to go after those of us in the media who write anti-jihad articles. That was shortly followed by a DDoS attack on Pamela Geller’s website. However, Texas decided to host a Muslim event that promoted the same ideology concerning telling the truth about Islam and its “prophet” called “Stand with the Prophet.” As a result, freedom loving patriots rallied around Geller and her organization’s free speech protest of the event. As media reporters descended on Texas to cover the Islamic conference, they were denied access even after they had paid for tickets and airfare. But the taqiyya and the subsequent Sharia enforcement by police will blow you away.

The United West has documented what took place in an eleven and a half minute video, which you can see below.

Fox News reporter Jesse Watters, Damon Rosen of The United West and Adam Kredo of the Washington Free Beacon are seen in the video having had their tickets to the event revoked. Christian Post reporters and other “certain” individuals who also purchased tickets in advance and made the trip to Texas were denied access.

Rosen said that he believes that he was discriminated against due to his religion via his last name while pointing out that the conference claimed to be “inclusive.” He also said that based on the fact that Sirai Wahhaj was a speaker, he guessed that “blasphemy laws” would be brought up at the conference.

At 2:37 into the video, Alia Salem appears. Salem is the Executive Director for the Dallas/Ft. Worth chapter of the designated terror group Council on American-Islamic Relations. She claims only to be involved in dealing with media press passes, but claims ignorance of why tickets and press passes were either revoked or not issued. Watters reminds Alia that Malik Mujahid came on The O’Reilly Factor (see video below). Mujahid said that it was good to promote the conference following the Paris attacks. This is the same guy that invited the following to speak at the conference:

Mujahid claimed that the jihadists who engaged in the Paris attacks are “against Islam,” despite evidence in the Koran and history to the contrary. Again, he is either ignorant or lying. I don’t think he’s ignorant.

O’Reilly told Mujahid that Watters would be sent down to the event and yet, he was not allowed in.

Watters told Salem that not only did he fill out a press pass, something she said had to be done, but also provided an email via his phone that he received after he arrived in Texas, which revoked his ticket for no reason. Salem, without checking anything basically called Watters a liar by saying that he didn’t fill out a press pass. She then goes on to lie to him further stating that if he was found to have filled out a press pass he could enter and they would allow only the first 20 minutes to be filmed (thus hiding the full content of the conference from public scrutiny).

Once the email was shown to Salem and Kredo also voiced the fact that he was denied, she said she would check on things and be right back. Note the incredible lengths that Watters goes to in order to be polite to her. Salem also would not answer what media was allowed inside. The United West’s tickets were also revoked.

At 6:46 in the video it is visibly darker outside and a Garland Police Officer is communicating the fact that there have been no arrests made and no problems with protesters at the free speech rally, which was in opposition to the conference. Alia Salem is seen during the officer’s comments.

Following that, at the 7:11 mark, Salem can be heard calling the media present “vultures.” Also, another Muslim spokeswoman joins in and begins to basically contradict what the officer had just stated about the peaceful protest. In other words, she took out the lesson from the militant sodomites and played the victim claiming that she was a victim of “hate speech.” She also called the free speech rally a “hate protest.”

However, once she recognized who she was talking to was a member of the media, she bowed out of the conversation and around 8:20 in the video, Alia, who never returned with an explanation as she promised, became even more intolerant and snarky. She claimed that a security officer told the reporters why they were not allowed in, something that never happened.

Then the Muslim spokeswoman, who claimed she could only “speak for her own self” started interjecting herself into the conversation as though she was an authority and chastised the reporters for “verbally accosting” Ms. Salem.

Finally, at 10:25 in the video, the police threaten the reporters with criminal trespass charges. See how that works? They are not enforcing the law, they are bowing to Islamic Sharia. Call it what you like, that is what is going on here… in Texas!

Keep in mind too that this event was held on public property, paid for with public tax dollars. This was not private property. As shown in the video, the Muslim group Sound Vision violated section 1.04 of the Curtis Culwell Center Regulations, which reads:

Further, any Lessee conducting an event open to the public, or for which there is an admission paid, shall not discriminate against any person, directly or indirectly… shall be refused or restricted because of race, sex, color, religion, ancestry, national origin, or physical challenge.

I would love to see the reporters file lawsuit against Sound Vision for their violation of the regulations and the damages they incurred in all of this. In addition, they should also bring a lawsuit against the law enforcement officers who threatened them with criminal trespass.

The “Stand with the Prophet” event was sponsored by Sound Vision, who claim on their Facebook Page that Muhammad “ended cycles of revenge by establishing the rule of law.” They also say that because of that, he was “honored by the U.S. Supreme Court as one of the 18 greatest law-givers of the world.”

While the honor of the Supreme Court over 300 years after America’s first settlers established the New World may seem as though it amounts to something special, the reality is quite different, but that is for another article. Until then, just take a look at David Wood’s video here, here, or here to see whether that “rule of law” (Sharia) was vengeful or not. I think you’ll find that Sound Vision doesn’t have a clue as to what Muhammad engaged in or said… or they are lying. I believe they are lying, as evidenced by their press person who is tied to a designated terror group.

As for the event, Sound Vision can claim what they like, but they were espousing the very ideology of the Paris jihadists. What the event organizers did in this instance with reputable reporters in keeping them from a public event, in violation of the regulations, is only a taste of what these devils have in store for Americans should they be allowed to impose Sharia.