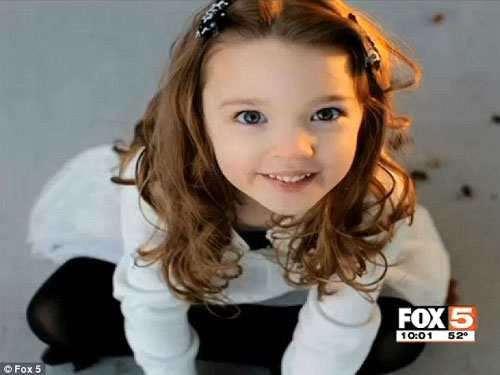 Cue the pro-vaccine crowd’s b.s. arguments as to why this is doesn’t matter and we should all keep taking the risk shooting up our children in the hopes this won’t happen to us.

A five-year-old girl has died in hospital three days after developing a strain of the flu that she was vaccinated against – as a deadly outbreak of the virus continues to sweep across the country.

Keira Driscoll was prescribed steroids and a nebulizer at a Quick Care clinic after she started feeling unwell with a cough and a fever at her home in Clark County, Las Vegas, last Sunday.

But just hours later, she collapsed. Her mother, Tiffany Driscoll, frantically performed CPR on her small body, before she was rushed to hospital. There, she was found to have influenza A.

Despite medics’ best efforts, Keira could not be resuscitated and she was placed on life support. On Tuesday, her parents made the heartbreaking decision to turn off the machine the next day.

The vaccine… didn’t magically save her. Why? Because vaccines are not magical saviors (despite what Big Pharma and its biggest customer, the Centers for Disease Control and Prevention, would have people believe).

The CDC just got done admitting last week that more than 3/4ths of the people who take the shot this year are going to get the flu anyway but the agency stupidly continues to tell people to get the shot they admit probably won’t protect them from diddly squat!

Why? Someone has money to make, obviously.

That’s after the CDC admitted this year’s flu vaccine is the wrong strain. They’re saying it’s maybe 23% effective. Not very good odds, and yet again, like we live in crazy land, they’re still telling people to get the shot anyway even though they know it’s ineffective.

The seasonal flu isn’t supposed to be “deadly” anyway, just by the way. The reason so many things like the flu or even measles are deadly these days is because so many people are nutritionally deficient. Maybe if our food wasn’t junk, and our water and air weren’t poisoned, we’d be hearing a lot less of these stories in the first place.

The fact of the matter is, even the studies that have come out to compare vaccinated with unvaccinated people have shown that the flu vaccine is not nearly as effective in people who have received previous flu vaccines! This study, published in the journal Clinical Infectious Diseases, looked at 7,315 enrollments during eight seasons and ultimately found:

Vaccine-induced protection was greatest for individuals not vaccinated during the prior 5 years.

Here are the details:

Let’s just take that first number against H3N2. Sixty-five percent? That’s the general rate of vaccine effectiveness? Well WOO HOO. What about the other 35%???

Sixty-five percent isn’t even that high anyway considering these people are taking a shot filled with chemicals and heavy metals that bypasses their natural immune systems and all the risks that go along with that. But that 65% protection is for unvaccinated people.

Check out the protection for the good little citizens who take their government-recommended flu cocktail every year: 24%.

Even against flu strain B, those same vaccinated people only get 48% protection.

Think about if you bought anything and it only worked 24% or 48% of the time…? Wouldn’t you throw that piece of crap in the garbage or return it to the store for a refund? Or would you just dutifully keep buying pieces of crap that suck?

Well, too late with a vaccine; you already shot yourself up with heavy metals, antibiotics, genetically modified viruses, preservatives like formaldehyde and emulsifiers like polysorbate 80 — which has been linked to gastrointestinal problems, heart attacks, strokes, impaired immunity and tumor growth for starters — and which studies have shown helps all the other chemicals in said shot more easily bypass your blood brain barrier and permeate your gut.

In fact, this whole situation has caused a flu vaccine “paradox”:

Pharmaceutical companies and the larger medical community absolutely don’t want studies conducted that compare the health of unvaccinated individuals to those who get regular vaccines – even when they find a troubling “paradox.” Yet, this story showing the results of seasonal flu vaccines can already show a link to unintended consequences. They say since building more sensitive immune testing equipment, that they haven’t seen increase in (seasonal?) flu illnesses among vaccine recipients versus unvaccinated individuals. They are dubbing it a “blunted protection to seasonal flu.” From CBC:

But researchers in several countries have found a blunting or “interference” effect between previous seasonal vaccines and reduced levels of vaccine protection in later years for some strains.

What?? If vaccines are supposed to “immunize” or give the immune system a boost, and the CDC in the U.S. is telling everyone to go ahead and get ineffective flu vaccines for added protection – then how can past vaccines run “interference” and knock out the effects of future vaccines? This attempt at damage control doesn’t make any sense…. [emphasis added]

No, it doesn’t make any sense. It never did. It never will.

Even though this little girl died from the very strain of flu the people who sold her parents the vaccination promised it would protect their baby from, the establishment media is pathetically still trying to twist this in a pro-vaccaination agenda light, calling this year’s flu season a “deadly epidemic” and scaremongering just like they always do every single year per the script.

You know how many kids have died of the flu (children who likely already had compromised immune systems and other health issues to begin with) this year? Fifty-six.

You want to know what a real “deadly epidemic” is?

Try 100,000 people dying EVERY YEAR after taking pharmaceutical drugs AS PRESCRIBED. (That doesn’t even begin to count the thousands who die from abusing their prescriptions or we’d be here all day.)

Every time someone dies it’s sad, especially when a child passes away who was just starting to live her life, but ask yourself, “Which of these things is a real deadly epidemic?” (Hint: It’s not the flu.)

But hey, go get your vaccines because the government, which was forced to admit the vaccines don’t even work this year, said so.