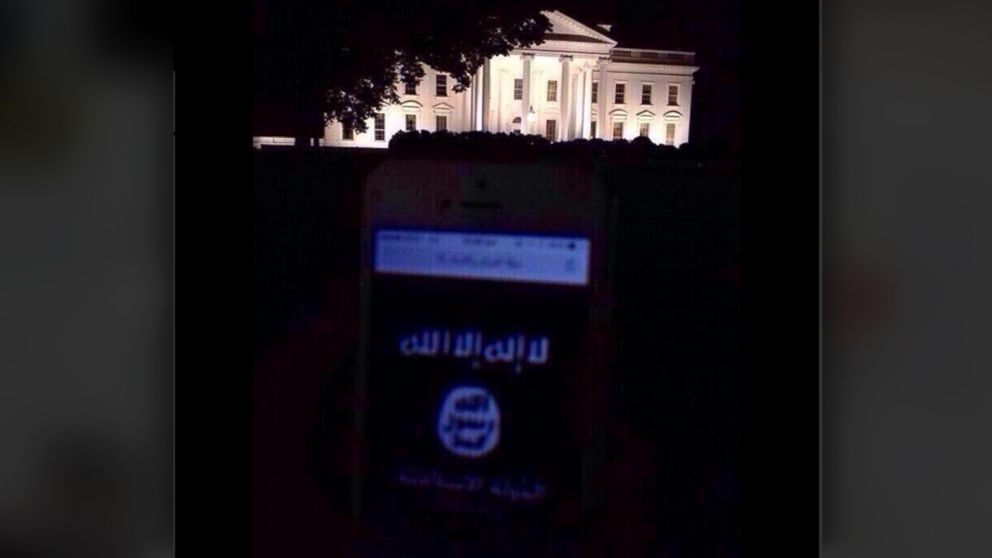 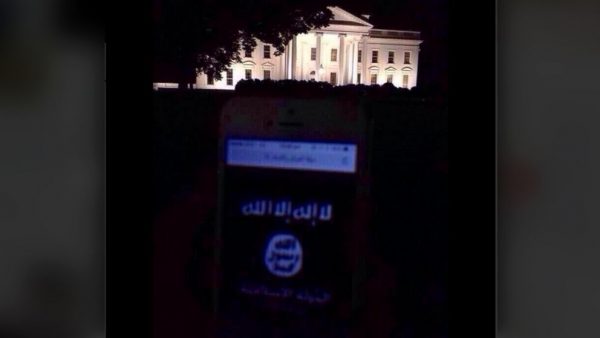 The ISIS threat is a manufactured threat. However, just because the threat is contrived, does not mean that this CIA controlled organization does not represent a serious threat to the American people.

The Secret Service said it is “aware” of the above photo that shows an ISIS flag in front of the White House. I am quite certain that Barack Hussein Obama took his time ordering the Secret Service to take down the flag.

ISIS routinely issues threats against the U.S. In a recent video series by Vice Media, an ISIS militant told a Vice camera, “God willing, we will raise the flag of Allah in the White House.” Judging by the above photo, at least temporarily, it would appear that ISIS has succeeded.

ISIS, by design, is everywhere. The following was tweeted from an apparently pro-ISIS Twitter handle @sunna_rev on August 9, 2014

Then of course there is the boldly announced presence of ISIS at the tumultuous events in Ferguson with regard to the shooting of Michael Brown. Please take careful note of the following picture, with ISIS sign in the background, to go along with accompanying tweets which attempt to recruit and radicalize our youth.

Unless one is  a die-hard coincidence theorist,  it is very difficult to discount the connection between the ISIS sign, listed above, and the attempted recruitment and radicalization of our youth with regard to building a domestic terrorist force in order to carry out dramatic acts of domestic terrorism which will ultimately result in a declaration of martial law. I submit that this is precisely what is happening inside of the United States, right here and right now.

In a stunning case of predictive programming, the new NBC hit series, State of Affairs, shows exactly what ISIS is up to as they are recruiting college American youth in order to carry large-scale domestic terrorism. The following episode of State of Affairs if particularly telling as terrorist recruit, “Stacy Dover”, blows up a CIA safehouse killing a U.S. Senator, a CIA agent and seriously wounding the CIA Director. The name of the terrorist group, in the show, is not ISIS, but it may as well be as the show name for ISIS is “Ar Rissalah”. The above described scene is portrayed in the first few moments of the latest State of Affairs episode depicted below.

The True ISIS Threat Was Manufactured By the CIA

Aaron Klein, an author for WorldNetDaily, has reported that members of ISIS fighting against the al-Assad government in Syria were trained by U.S. military instructors in Jordan. We also know that ISIS received it weapons from cast of military supplies left by U.S. troops in Iraq. By law, these weapons caches were to be destroyed before the troops redeployed to the United States.  ISIS is clearly a CIA psyops that has two goals:

1. Take Syria’s Assad out of power.

2. Become the next excuse on why we must continue to hand over our rights to the government to protect us.

Your children are vulnerable to become recruited by ISIS as witnessed by the three teenage Colorado girls who wanted to join ISIS as a good opportunity to study how the militant group recruits young people in the West, U.S. law enforcement officials told CNN. Again, as in Ferguson, American youth are being recruited through social media. I issue this warning now to the parents of America: Know what your children are doing. Monitor their social media and forget the lame argument that they have privacy rights. Nonsense! You have parental responsibilities.

UK spyleader Robert Hannigan has said ISIS uses Twitter, Facebook and WhatsApp to reach their intended teenage targets in a medium of communication that they understand. The most popular methods include making use of popular hashtags for other stories in the news, such as Ferguson riots, the Ebola scare or the World Cup Soccer Tournament, to disseminate their message.

I am coming across evidence which demonstrates that ISIS is being established as a domestic terrorist police force inside of the United States in conjunction with other terror groups. This topic will be the subject of a future article.

Meanwhile, there are a plethora of methods to monitor your child’s twitter account, Facebook and text messages. Simply Google “Monitoring your child’s social media”, because the ISIS “beheaders” are everywhere.