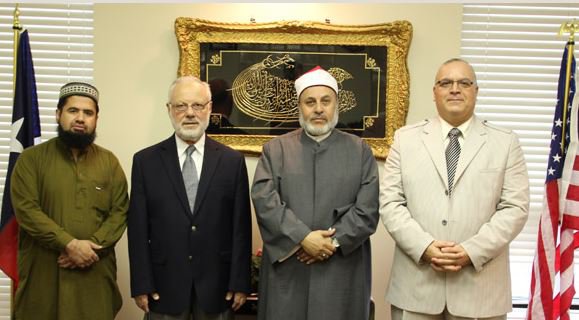 America, you can’t say you have not been warned. The very ideology and law that is prevalent in the Middle East and that condemned Mariam Ibrahim to death for marrying a Christian man is being established in the State of Texas! Keep in mind that this is exactly where Obama’s former Homeland Security adviser and Muslim Brotherhood supporter Mohammed Elibiary went to after he left Washington.

An Islamic Tribunal that uses Sharia as the basis for law, not the US Constitution, the Bible nor the Texas State Constitution has been set up as a non-profit organization in Dallas. But don’t worry, one of the attorneys for the tribunal says that both participation and the acceptance of the tribunal’s decision are strictly “voluntary.”

In matters of divorce, El-badawi said that “while participation in the tribunal is voluntary, a married couple cannot be considered divorced by the Islamic community unless it is granted by the tribunal.” He compared their divorce, known as “Talaq,” as something similar to the Catholic practice of annulment in that the church does not recognize civil divorce proceedings as ending a marriage.

He also said there is a difference between how a man and a woman can request a divorce under their system. “The husband can request the divorce directly from the tribunal,” El-badawi stated. “The wife must go to an Imam who will request the divorce for her.” He called it “two paths to the same result.” The practice of Khula is the process where a wife can initiate a divorce proceeding and where the husband can agree to the divorce in exchange for a financial compensation. It appears the wife must agree to give up any claim to the “dower” that was not already paid or to return it if it has already been paid. Once the financial issues are resolved the husband can then proclaim the Talaq (divorce).

El-badawi said they follow Texas family law when it comes to child support, visitation, and custody. He said that in most cases, custody of children is awarded to the mother.

The tribunal claims that, for the most part, Sharia is in agreement with the laws of Texas. Price was told by El-badawi that if the tribunal ruled in a way in which the parties disagreed, then they could go to the Texas courts, which makes you wonder why one would have this tribunal in the first place.

But what about other issues? What about issues of adultery? What about theft and other crimes? How will the tribunal handle those things, which are a part of criminal law under Sharia?

The tribunal’s website explains various forms of law and their origins. The site claims,

“The entire text deals with transactions, Mu’amalat in general, which has the same principles and articles used in all transactional laws found throughout the world and are similar to existing laws with the United States. Stoning adulterers, cutting of the hands, polyandry and the like (all can be traced in the relevant literature and can be explained in their Islamic legal mentality and rational context in fairness and justice), are mainly a part of Islamic Criminal Law. In fact, criminal law within Islam only makes up a fraction of the Shari’ah. It is unscholarly and unfair to generalize that type of understanding that is Criminal Law, to compromise the whole of Islamic law if we stick to speaking in technical terms.”

While it may be “unscholarly” and “unfair,” it would also be a wise thing to keep in mind because these things are not denied as part of what Islam brings in Sharia.

As far as technical terms go, nothing was said about these explicit Koran commands:

5:33- “The punishment of those who wage war against Allah and His Messenger, and strive with might and main for mischief through the land is: execution (by beheading) or crucifixion, or the cutting off of hands and feet from opposite sides, or exile from the land: that is their disgrace in this world, and a heavy punishment is theirs in the Hereafter.”

47:4- “Therefore, when ye meet the Unbelievers strike off their heads; at length; then when you have made wide Slaughter among them, carefully tie up the remaining captives”…

8:12- “I will instill terror into the hearts of the unbelievers: smite ye above their necks and smite all their finger-tips off.”

The Bible lays out criminal law too and to some it causes them to revile God’s punishments, yet they are holy and just. I cannot say as much for Islam, as the things we have seen pushed forward in the name of Sharia are often corrupt and unjust.

The Foxhole comments, “They take advantage of Homeland Security’s lax approach to foreign threats and Obama’s sympathetic pro-Islam policies. We’re saddled with a Dhimmi in the White House. As I’ve said, there are reasons why they are confident enough to create a min-Islamic state in this country. They’ve been given the green light.”

The Foxhole then concludes:

Al Qaeda holds Death To The West conferences in Chicago, there’s a substantial radical muzzie enclave in Dearborn, Michigan, and Jamaat Al Fuqra terrorists have established training centers across the United States. The Muslim Brotherhood, the Arab-American Action Network, and CAIR, three major facilitators of Islamic terrorism, operate freely in America. A government report concluded that Hezbollah has been forming sleeper cells throughout the United States that could become operational.

Islam is diametrically opposed to every Constitutional principle on which this country was founded. Under the muzzie point of view, Sharia Law trumps all other laws. It’s meant to overtake and replace all Western civil, criminal, and government jurisdiction. The founding principles of this country did not hinge on a violent, ideological theocracy that advocated the deaths of those who didn’t hold the same religious beliefs.