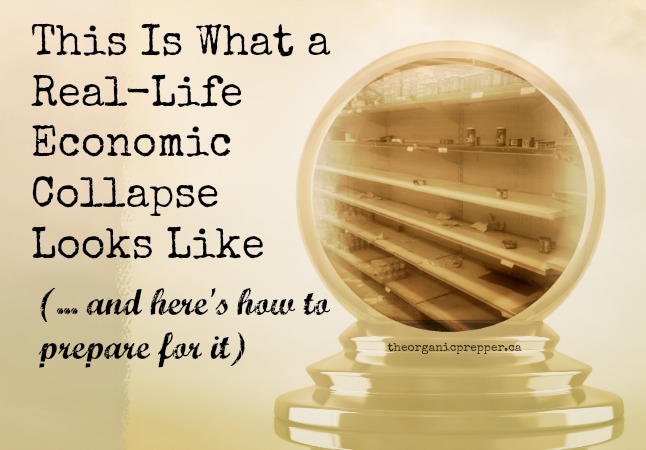 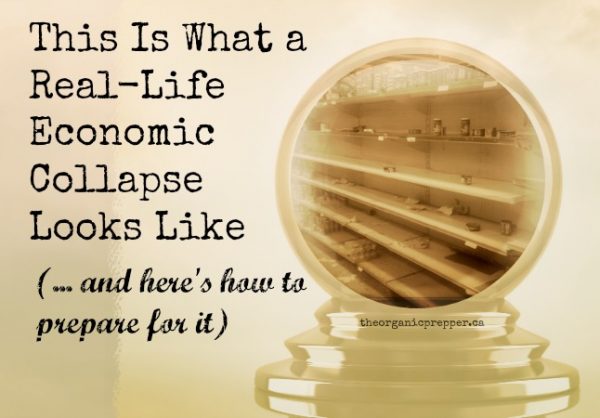 Did you ever think about what your life would be like if the stores were closed? I’m not talking about a post-apocalyptic Mad Max scenario or a winter storm that clears the shelves. I’m talking about a long-term disruption of services caused by an economic collapse.

What if you couldn’t run to Wal-Mart to get soap?  What if the grocery store had supplies so limited that they were rationed out to people in such small amounts that the food you got was not enough to meet your needs? What if there were no diapers for your baby or aspirin to cure a headache?

This is exactly what happens in a serious economic collapse. It happened a couple of years ago in Greece, and it’s happening right now in Venezuela. Bloomberg.com reports a scene of desperation:

Long lines, some stretching for blocks, formed outside grocery stores in the South American country’s capital as residents search for scarce basic items such as detergent and chicken.

“I’ve visited six stores already today looking for detergent — I can’t find it anywhere,” said Lisbeth Elsa, a 27-year-old janitor, waiting in line outside a supermarket in eastern Caracas. “We’re wearing our dirty clothes again because we can’t find it. At this point I’ll buy whatever I can find.”

Inside a Plan Suarez grocery store yesterday in eastern Caracas, shelves were mostly bare. Customers struggled and fought for items at times, with many trying to skip lines. The most sought-after products included detergent, with customers waiting in line for two to three hours to buy a maximum of two bags. A security guard asked that photos of empty shelves not be taken.

Police inside a Luvebras supermarket in eastern Caracas intervened to help staff distribute toilet paper and other products.

“You can’t find anything, I’ve spent 15 days looking for diapers,” Jean Paul Mate, a meat vendor, said outside the Luvebras store. “You have to take off work to look for products. I go to at least five stores a day.”

“This is the worst it has ever been — I’ve seen lines thousands of people long,” Greisly Jarpe, a 42-year-old data analyst, said as she waited for dish soap in eastern Caracas. “People are so desperate they’re sleeping in the lines.”

So what a real economic collapse looks like is  actually this: The situation is dire, and shows no signs of improvement on the horizon.  Why is the economy so bad in Venezuela? A report by JD Heyes of Natural News gives a snapshot:

A combination of economic factors has all contributed to Venezuela’s disintegration — a lack of foreign capital and declining oil prices among them — but the country’s socialist economic policies are at the root of every problem.

There are shortages of virtually everything, from car batteries to toilet paper — even McDonald’s french fries. Annual inflation rose to 64 percent in November.

The government there sounds a lot like the government here.  Military forces have deployed to the nearly barren stores to “protect” shoppers and store employees. Meanwhile, like something out of a dystopic movie, Interior Minister Carmen Melendez took to the airwaves to utter blatantly untrue propaganda in an attempt to assuage the hungry and increasingly desperate citizens.

“Don’t fall into desperation — we have the capacity and products for everyone, with calmness and patience. The stores are full.”

This reminds me of that scene in “The Interview

” where one of the main characters, Dave Skylark, discovers that the abundance he was assured of wasn’t real and that the food in the grocery store window was actually made of plastic.

If you’re paying attention, you’ll be able to see the writing on the wall. More and more businesses are closing here in America, and we could soon be going down the same chaotic path as Venezuela, and Greece before them.

Prepping Is Not the Answer

You probably never expected to read that on a preparedness website, did you?

You might think that if you’re a prepper, you’re immune to all of this. Unfortunately, that’s not the case.  In the case of Venezuela, prepping became illegal last fall.

Today’s lesson is that when times get tough, the government can and will persecute those who have planned ahead.

The Attorney General of Venezuela, Luisa Ortega Díaz, called on prosecutors to target people who are “hoarding” basic staples with serious sanctions.

She called on prosecutors to seek their detention.

The attorney general called on people to remain calm, not to fall for provocations, and not to be afraid of the “alleged” food shortage.

Based on the figures provided by the Central Bank of Venezuela, shortage hit 20% in August; in other words, 20 out 100 items are missing from the shelves.

According to a press release, the Attorney General Office has designated an ad hoc group of prosecutors to work nationwide with other authorities and cope with the threats against food security and, consequently, against the State. (source)

So basically, the Venezuelan government intends to treat those who prepared ahead of time like domestic terrorists…sound familiar?

Executive orders are already in place to crack down on preppers should the government decide to do so. The game pieces have already been moved into place to ban “hoarding” in America.  In 2012, President Obama signed an executive order that gives the federal government authority over every resource and infrastructure element in the United States. And “every resource” includes your pantry.

Michael Snyder recently wrote about the war on preppers on his site, The Economic Collapse Blog:

There are approximately 3 million preppers in the United States today, and often they appear to be singled out for punishment by bureaucratic control freaks that are horrified at the thought that there are families out there that actually want to try to become less dependent on the system.  So if you use alternative methods to heat your home, or if you are not connected to the utility grid, or if you collect rainwater on your property, or if you believe that parents should have the ultimate say when it comes to health decisions for their children, you could become a target for overzealous government enforcers.  Once upon a time, America was the land of the free and the home of the brave, but now we are being transformed into a socialist police state where control freak bureaucrats use millions of laws, rules and regulations to crack down on anyone that dares to think for themselves.

So, what can you do?

“What can you store?” is not the answer to this conundrum.

Your focus has to be on long-term sustainability, frugality, and self-reliance.  Don’t get me wrong – a stockpile is sensible and an important course of action. It should definitely be part of your preparedness plan.

However, you need to also be ready for the time when the supplies in your well-stocked pantry are no longer available.  You need to be able to meet as many of your own needs as possible or you’ll end up being one of those people wearing dirty clothes because you can’t find laundry soap or going hungry because you can’t find any food at the stores – or can’t afford it if you can find it.

Lots of us have taken steps to free ourselves from the chains of the local Wal-Mart, but we can take it a step further.

We can learn to be self-reliant.

It’s only by reducing your need for the things sold in stores that you can exempt yourself from the chaos and desperation that will erupt when or if an economic collapse situation occurs here.

Take the time to revisit the situation in Greece a couple of years ago. Families were so desperate they gave up their children to be raised by the state when they could no longer afford to feed them.  People worked longer hours for less money, while the cost of everything went up, causing instant crippling poverty for the former middle class. Suicide rates sky-rocketed and the country’s lifestyle changed dramatically – and not for the better.

Books can be your best pre-collapse investment.

Knowledge and skills are among the most important things you can “collect” to prepare for an economic collapse. However, if you haven’t been at it your entire life, it’s difficult to remember everything. Create a library of references to help you in your quest for self-reliance.  These are some of my favorites:

I’d like to issue a challenge. What can you do right now to reduce your reliance on the stores?  How can you take your prepper skills to the next level? Can you start making your own soap? Heat exclusively with wood? Grow sprouts in your windowsill? How long can you go (dipping too deeply into your stockpile is cheating) without a trip to the store for consumer goods? How can you stretch your groceries and make your supplies go further? Can you cut down on the supplies that you require from the store? Pick one thing (at least) and let us know about it in the comments.

This isn’t just for people who live in farming communities or for those who are off-the-grid already. Nearly anyone can lower the amount of consumer goods they require, regardless of their living situation. Please share your ideas  – the challenge you take on might help someone else in a similar situation see a way to reduce their dependence too, when they previously felt there was nothing they could do.  None of us are trapped in a hopeless situation. We can prevent ourselves from being those desperate people being policed and rationed in the near-empty stores by learning self-reliance skills today.

Daisy Luther  lives in a small village in the Pacific Northwestern area of the United States.  She is the author of The Organic Canner and The Pantry Primer: How to Build a One Year Food Supply in Three Months. On her website, The Organic Prepper, Daisy uses her background in alternative journalism to provide a unique perspective on health and preparedness, and offers a path of rational anarchy against a system that will leave us broke, unhealthy, and enslaved if we comply.  Daisy’s articles are widely republished throughout alternative media. You can follow her on Facebook,Pinterest,  and Twitter, and you can email her at [email protected]