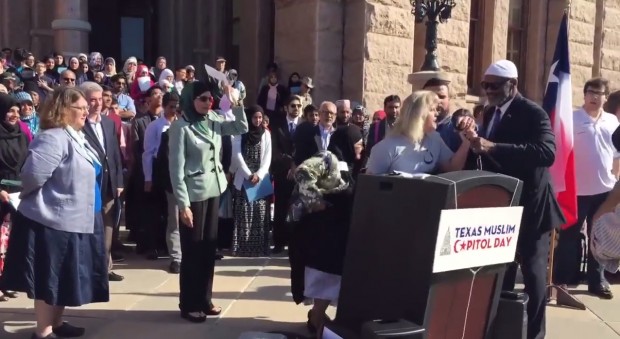 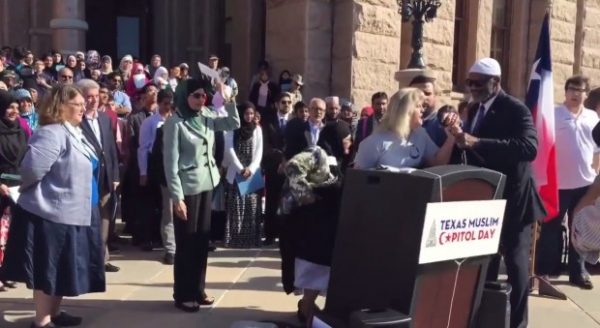 A Christian woman took over the podium at the 11th annual Texas Muslim Capitol Day event on Thursday and declared, “Islam will never dominate the United States and by the grace of God, it will not dominate Texas.”

You already know this bold and brave woman from an earlier stand she took at the National Cathedral in Washington. Her name is Christine Weick.

The 50-year-old approached the podium, grabbed the microphone and said, “I proclaim the name of the Lord Jesus Christ over the Capitol of Texas. I stand against Islam and the false prophet Mohammad. Islam will never dominate the United States and by the grace of God, it will not dominate Texas.” The woman then walked away and joined the other protesters.”

She then stepped down to join other protesters who had gathered with signs and chanted “Jesus,” “Islam is a lie” and “No Sharia here.”

Keep in mind that this event is sponsored by the designated terror group Hamas-Council on American-Islamic Relations. Also keep in mind that the executive director of the Houston chapter of Hamas-CAIR, Mustafaa Carroll, has gone on record to declare, “If we are practicing Muslims, we are above the law of the land.”

At the event, Mustafaa said, “Texas Muslim Capitol Day will provide Muslims with an opportunity to benefit Texans state-wide by urging lawmakers to support issues that affect people of all faiths. This is also an opportunity for people of all ages to learn about the democratic process.”

The problem is that Sharia is completely unlawful, according not only to the US Constitution and the Texas Constitution, but most importantly to the Scriptures, since the basis of Islam is a false god and a false prophet.

When alleged “threats” came into CAIR (see how they play the victim?), they contacted the FBI. Carroll says that the group’s agenda was not encouraging the passage of Sharia law either.

“It’s not even logical,” he said. “It’s a shame that I even have to address that.”

We just reported on the fact that an Islamic tribunal set up in Texas occurred this week! It’s based on Sharia law! This is the camel’s nose under the tent America!

Furthermore, consider that CAIR is a Muslim Brotherhood front group, is an unindicted co-conspirator in the largest Hamas funding trial in our nation’s history, and that the Muslim Brotherhood has penned its goals for the destruction of America from within and the establishment of a Caliphate.

Speaker of the House Joe Straus defended CAIR and their event saying, “The Texas Capitol belongs to all the people of this state, and legislators have a responsibility to treat all visitors just as we expect to be treated — with dignity and respect,” Speaker of the House Joe Straus said in a statement following the event. “Anything else reflects poorly on the entire body and distracts from the very important work in front of us.”

However, freshman Rep. Molly White (R-Belton) took a little different stand. Though she was not at the event, she did leave instructions for her staff should members of the Muslim community come to her office.

“I did leave an Israeli flag on the reception desk in my office with instructions to staff to ask representatives from the Muslim community to renounce Islamic terrorist groups and publicly announce allegiance to America and our laws,” she posted on Facebook. “We will see how long they stay in my office.”

And what did Rep. White get for her instructions? That’s right, CAIR played the victim again and sent a letter to Speaker Straus asking whether or not she violated ethics rules by asking Muslims to pledge their allegiance to the United States. Amazing!

White first responded correctly, “I do not apologize for my comments. … If you love America, obey our laws and condemn Islamic terrorism, then I embrace you as a fellow American. If not, then I do not.”

That was before noon. However, by 3pm, she issued a statement in which she welcomed “all of my constituents who would like to come and visit our office in the Texas State Capitol.”

“As law-abiding American citizens, we all have the privilege and the right to freedom of speech granted to us by the First Amendment,” she wrote. “… As a proud Texan and American I fully denounce all terrorist groups or organizations who’s [sic] intent is to hurt and destroy the great state of Texas and our nation.”

Perhaps you are a Christian who thinks that Christine Weick’s actions were “unchristian.” Let me remind you that a righteous indignation over false gods being openly promoted should consume every believer in the Word of God. Remember Elijah and the prophets of Baal? Elijah didn’t have a hard time mocking them, did he (1 Kings 18)? Remember Nehemiah and those that came to Jerusalem to sell their wares on the Sabbath? He had harsh words that would be followed by harsh actions if they showed up again on the Sabbath (Nehemiah 13:16).

I ask you, where are the Christians who are bold? Where are the Christians who are unafraid and defend God and His Word more than they care about who they offend? I can say at the very least that Christine Weick has some intestinal fortitude to do what the men of this country should have been doing long ago. May God give American Christians their righteous indignation back and may He bless us once again with true repentance.