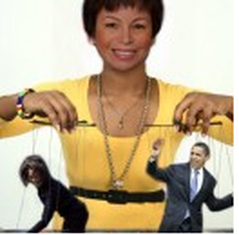 “There will be hell to pay for Obama’s critics in the second term.”
– the words of puppet master Valerie Jarrett to all who oppose Obama’s socialist and islamic agenda

OK…let’s get something straight right up front…Barack HUSSEIN Obama is indeed a muslim. He surrounds himself with muslims…his actions and words confirm he is a muslim…and NO church in America has any record of him ever having converted to Christianity.

Now with that said it must be understood how this man has allowed our American government to be infiltrated by the enemy…and YES…muslims at this point in time are indeed America’s enemy. And I do NOT want to hear ‘it’s NOT all muslims’ because guess what…it is…for where are the so-called moderate muslim voices condemning the actions of the extremists…save for a mere handful they remain silent…and if you do NOT condemn you condone…period. 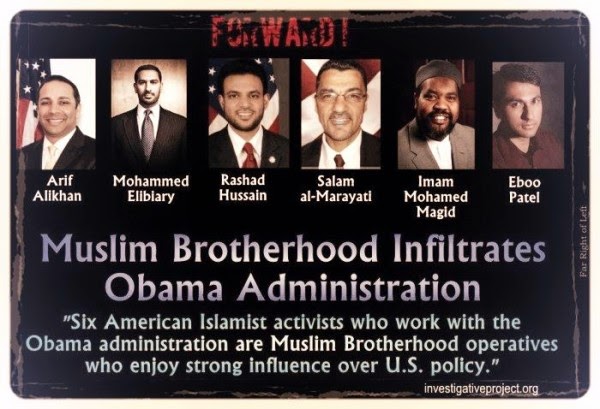 Now let’s remember that Obama is the very man…who through the fiasco known as the Arab Spring…actually aided in and allowed the rise to power of islamic terrorist groups in the Middle East, most notable at this point in time being ISIS. And he is also the man who allowed federal government positions of importance to be filled by members of the Muslim Brotherhood…a designated terrorist group in its own right. And with them now holding positions of power, it’s in-your-face-obvious how U.S. policy has undergone a drastic 180 degree turn to outright supporting those who shall we say, behave very badly, while at the same time throwing our allies aside…especially Israel.

Cases in point and these are but a few…remember just as relations with Libya were somewhat normalizing Obama threw his support to the al-Qaida backed militias opposing Gaddafi’s secular government (Gaddafi had renounced terrorism and was aiding the West with intelligence)…remember Benghazi and the could only have come from him ‘stand down order‘…remember his support for Egypt’s Muslim Brotherhood puppet President Mohammed Morsi and how it took a populist uprising and a military coup to remedy that ‘so-called’ unfortunate situation…remember his still on-going support and sending of our taxpayer dollars to al-Qaida, ISIS, and Muslim Brotherhood linked ‘so-called’ rebels in Syria…and remember too his announcing our dates of withdrawal from the Iraqi and Afghan war theaters which gave America’s enemies…his blood brethren…the time they needed to lay low, regroup, and move forward. 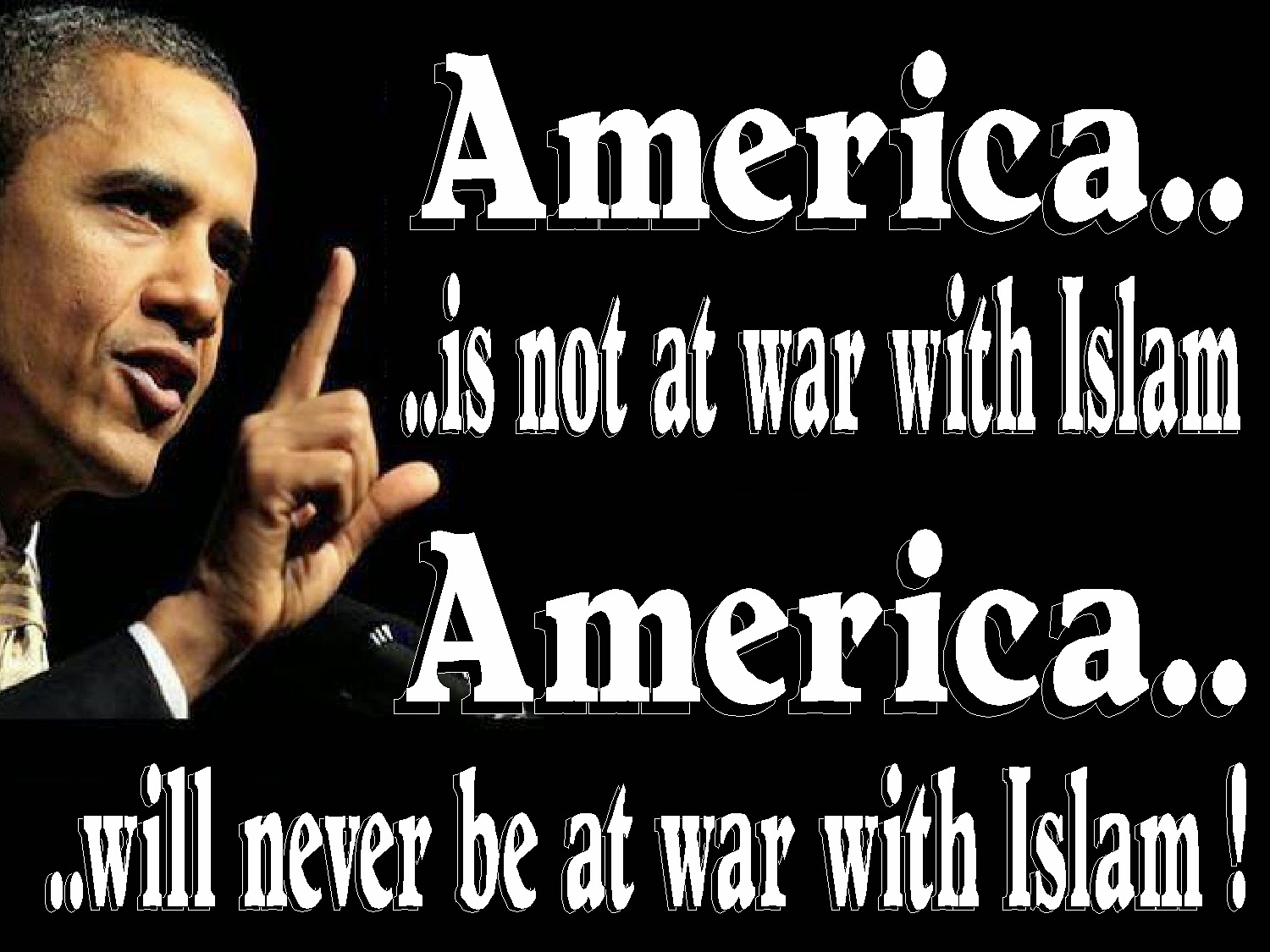 And always remember his continuing refusal to call the terrorism now gripping the world what it truly is…muslim islamic terrorism…key words being ‘muslim’ and ‘islamic’…key words that describe exactly who Barack HUSSEIN Obama is.

Yeah…Barack HUSSEIN Obama…the man who thinks the most beautiful sound in the world is the muslim call to prayer…is a muslim alright and so also believed to be is a certain key member serving as his Senior Advisor…that being puppet master Valerie Jarrett.

Born in Iran in 1956 to American expatriate parents working as doctors in the aftermath of the CIA-assisted MI6 coup that deposed Iranian Prime Minister Mohammad Mossadegh (a champion of secular democracy who resisted foreign domination especially in his push to nationalize Iran’s oil industry), and with Farsi as her mother tongue, this most vile woman held top positions in local Chicago government, politics, and business, and now with the official titles…but with her NEVER having been vetted or confirmed by Senate hearings…of ‘Senior Advisor’ and ‘Assistant to the President for Intergovernmental Affairs and Public Engagement,’ Valerie Jarrett’s hands are deep into every major and minor decision this miserable excuse of a president makes. 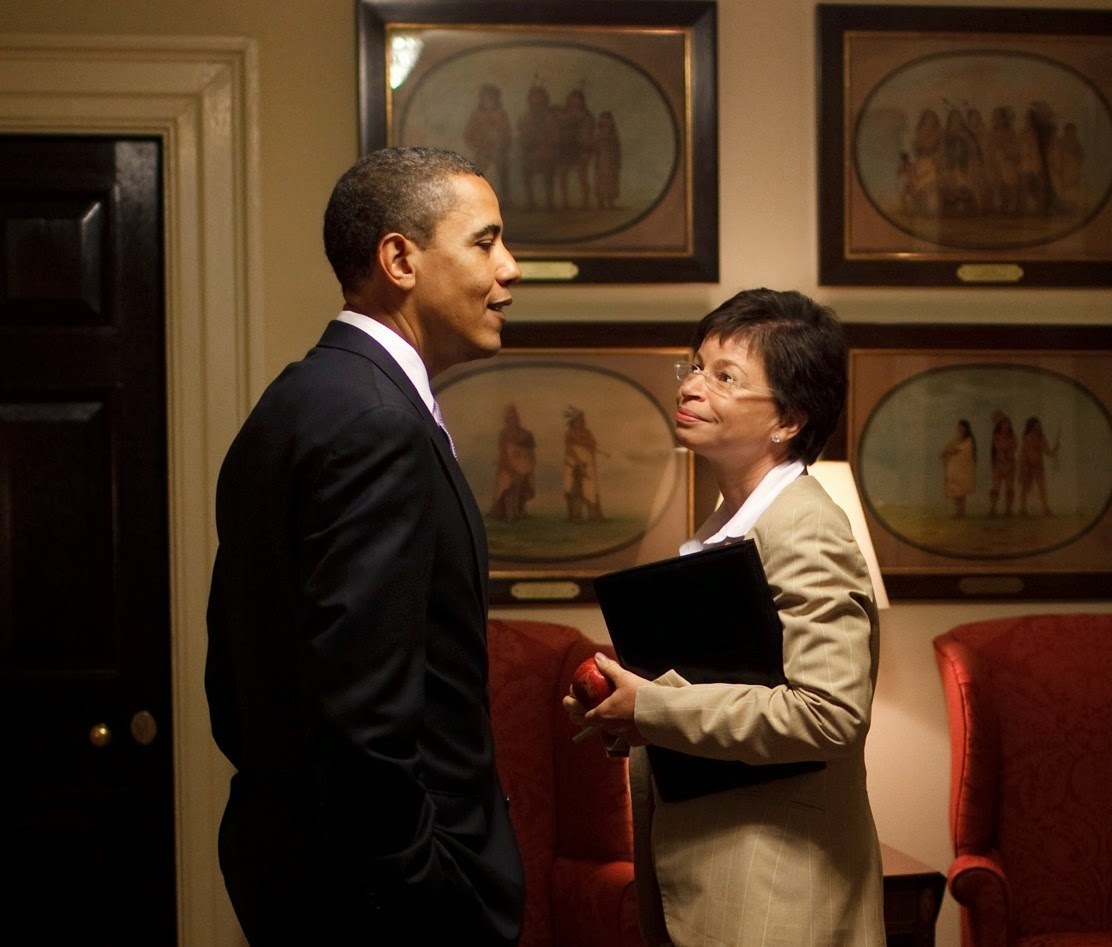 In fact, it’s been rumored that Valerie Jarrett tells Obama what each and every one of his decisions will be, who he can or cannot appoint to government positions, and she probably does so while dining with the first family in their private quarters most each and every night. And the decisions…besides critical policy decisions…
include her cattily telling Obama who’s loyal to him and who’s NOT…who he should see or NOT see when visiting a foreign country…and which foreign leaders he is ‘allowed’ to invite to the White House and who must at all costs be kept out…as in Israeli Prime Minister Benjamin Netanyahu.

And Valerie Jarrett…just like her boss…is NOT only (I believe) an American traitor, but like Obama is a true islamic sympathizer. A freely admitted socialist and progressive with decidedly communist leanings, her goals are every bit as nefarious as Obama’s, and that includes her sharing his wish to ‘fundamentally change’ our beloved America into something totally unrecognizable to ‘We the People’…to ‘fix-America’ if you will to be more like the rest of the world…to be part of the caliphate as the end game.

As unrecognizable to us as her anything but pro-American background now comes her belief that Obama was elected president to engineer social change. Simply put, Jarrett’s communist/socialist views lean most decidedly to the communist side courtesy of her parents being communist sympathizers, her family having intermarried (Valerie Jarrett is black) into the ever-so nefarious Bill Ayers family along with her grandfather and ex-father-in-law’s involvement with Frank Marshall Davis, the former head of the Communist Party USA and who some believe is Obama’s true daddy. And oh yes…many claim it was Valerie Jarrett herself who introduced Michelle to Obama…introduced my eye…who ‘arranged’ this sham of a marriage between two racially-driven people who hate their black selves…in Obama’s case his half black self…as much as they hate white people…as much as they hate this country. 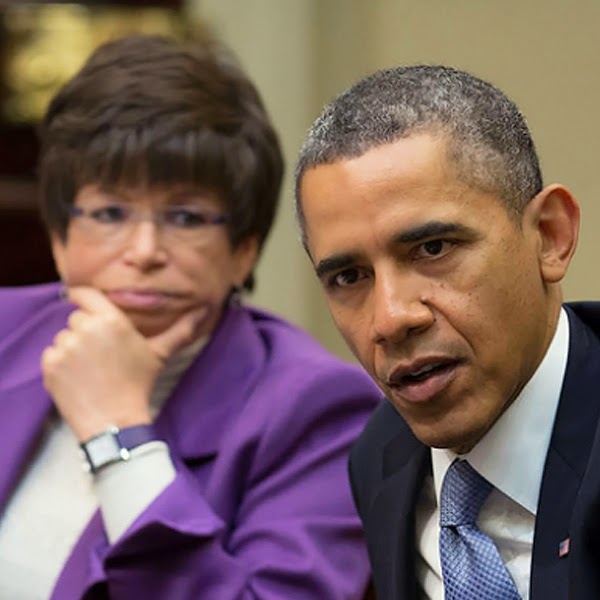 Vicious little circle isn’t it…and it gets better…how’s this for a bit of background and I only touch the surface, but know that Obama’s and Jarrett’s ties run deep…as do her ties to any and everything corrupt emanating from this White House. In fact, at Obama’s insistence, Jarrett sits in on National Security Council meetings, meetings on the economy, on the budget, and on foreign policy. And get this, Jarrett, who outwardly supports the Muslim Brotherhood’s agenda, is also ‘point man’ for the administration in meetings with muslim activists, and she routinely, albeit ‘privately’ (as in what is she hiding), meets with muslim and Arab-American leaders and advocates at the White House to discuss and share policy information, as well as briefing them on health care legislation, foreign policy, the economy, immigration issues, and critical national security information. I call that ‘aiding and abetting the enemy’…I call that treason. 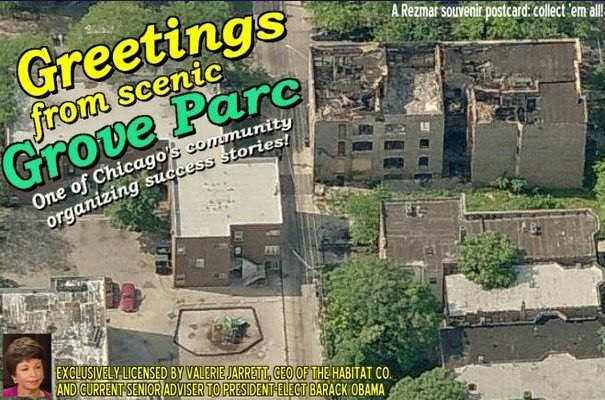 And like others of her ilk…as in the Al Sharpton/Jesse Jackson mold…Valerie Jarrett, a typical Chicago lawyer, built her career lining her pockets by taking advantage of her own people. While working in Chicago this anything but noble women was what we call a slumlord while at the same time working as a ‘supposed’ reformer… sounds akin to Obama’s community organizing now doesn’t it. And here’s a shocker….her slum project was in… surprise…surprise…former State Senator Barack HUSSEIN Obama’s Senatorial district. And it was he who helped Jarrett secure federal funding for said slum… Grove Parc Plaza. And as the CEO of Habitat Co., which managed Grove Parc Plaza, her mismanagement led to the complex being seized by the federal government after inspectors found the conditions ‘unlivable.’ And this in turn led to then Chicago Mayor Daily (the second Mayor Daily) to fire her sorry butt after a scandal erupted over Jarrett’s role in misuse of of the very public funds Obama helped her secure for this, among other things, ‘unlivable’ public housing project…for this slum.

And this woman is now Obama’s ‘right-hand-man’ if you will…one piece of trash advising another piece of trash on important issues facing our country…and doing so from a strictly islamist point of view as they work together to make America ever weaker on the world stage. 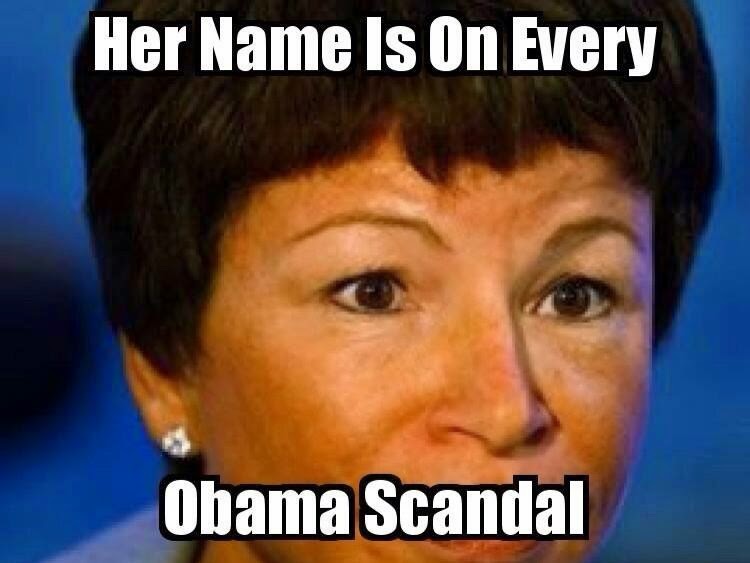 And advise Obama…more like order Obama…she does…most times to serve her own evil purposes, which thankfully sometimes backfire on her. An angry black woman…just like Michelle…it was Jarrett who told Obama he needed to force a showdown with Republicans over ObamaCare as part of her so-‘called’ strategy to regain Democratic control of the House…which obviously failed. Also having Jarrett’s marks all over it are the overly-expensive, unworkable, and much hated anything but health care plan known as ObamaCare complete with its ‘death panels’ and HHS mandate requiring all religious groups and institutions to fund both abortion drugs and contraception. And it was Jarrett who insisted Obama allocate the $535 million taxpayer-funded loan guarantee to Solyndra…and we all know how that one turned out. 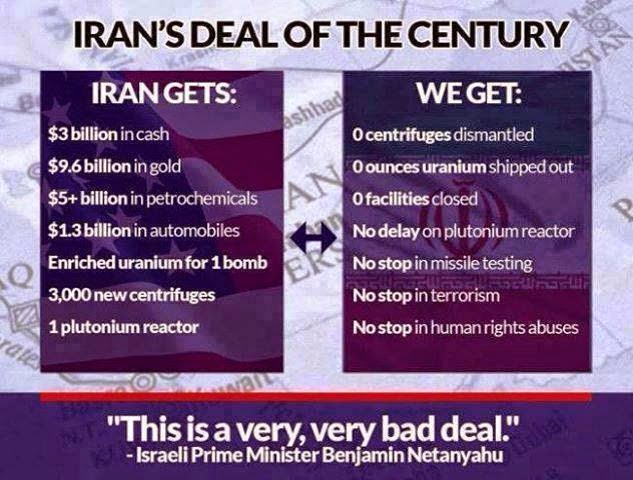 But it’s her successes of sorts that are truly dangerous, and they come by way of her close ties to the Iranian government. Remember it was Valerie Jarrett who got Obama to fire most if NOT all competent administration appointees and replace them with pro-islamist sorts…do the names of supposed muslim converts John Brennan and Chuck Hagel ring a bell And of course she did so that she could orchestrate and control, through her puppet Obama, the Iranian nuclear talks to work in favor of her birth country. In fact, Jarrett is alleged to have held secret talks in Bahrain with representatives of Ayatollah Ali Khamenei’s government for a year before the formal negotiations in Geneva began. And her goal…and let’s be honest here…was to work it so that at the talks Kerry would sign-off on whatever Iran wanted…which on Obama’s orders…on her orders actually…he did. Iran did after all get to continue their uranium enrichment program…that was worked out during those secret talks…and now have the upper hand in the current round of anything but disarmament talks…all courtesy of Valerie Jarrett pulling Obama’s strings.

But even with all the power Jarrett wields, I do need to make one thing clear NO matter that the conspiracy sorts might NOT like it…Valerie Jarrett did NOT issue the order to ‘stand down’ in Benghazi because she had nor does she continue to have any legal or Constitutional authority to do so. And NO general, admiral, or ranking officer loyal to the Constitution would accept any order from her to ‘stand down.’ It was Obama himself who gave that order…period. 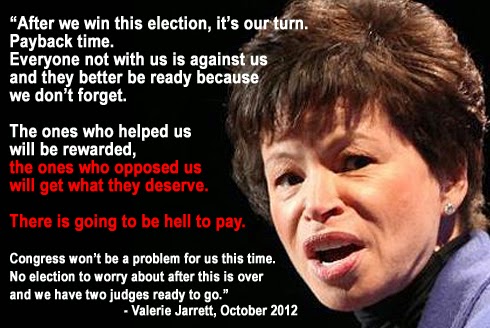 But the bottom line remains that Valerie Jarrett is the most dangerous and vindictive woman in America today for it’s she using radical political and social propaganda…aided by the mainstream media of course…who actually makes Obama’s decisions for him…which he than as president implements…decisions that include knowingly sabotaging our economy and helping to make our beloved America less safe. It’s Valerie Jarrett who directs Obama’s Marxixt/socialist agenda that equates to big government controlling every aspect of our lives…and it’s Valerie Jarrett…power hungry ego-maniacal narcissist that she is…who feeds into and actually directs Obama’s wish to do away with the country our Founders envisioned and to replace it with a sharia ruled islamic theocracy.

But being kept from Obama as he revels in a clueless reality that exists in his mind only is that it’s with Valerie Jarrett herself as queen bee and with him as NOTHING but a lowly worker bee in-waiting.