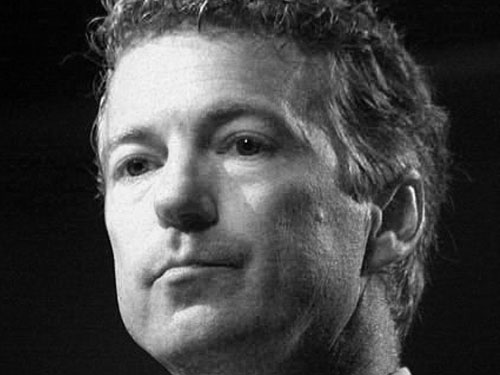 This is a question for those among us who still believe that America can be “saved” by voting.

If you’ve already figured out a long time ago that both sides of the aisle are thoroughly corrupt, bought out puppets for banks and megacorporations, then you don’t even have to read this article unless you just want to see further proof than Rand Paul is exactly just such a puppet.

Protesters recently disrupted a senate hearing over the fast-tracking of the Trans Pacific Partnership (TPP), waving banners that said things like “TPP FAST TRACK — JOB KILLING ACT” and screaming things like, “they’re going to ship more of our jobs overseas and lower our wages!!!”

NAFTA already helped facilitate a lot of that and we’ve been in a steady decline ever since. The TPP is NAFTA on steroids.

People are getting angry, restless. As the obscene wealth gap in this country continues to widen and the puppet masters running the show continue to clamp down on the plebs, this situation is only going to get worse for the majority of us.

The TPP, if you aren’t familiar, is no less than an all-out assault on our national sovereignty.

But I’m not the only one saying that. Here’s a summation from William F. Jasper of The New American:

The Trans-Pacific Partnership, or TPP, as it is called, is an all-out assault on our national sovereignty. It would unconstitutionally transfer legislative powers from the U.S. Congress, our state legislatures, and our city and county governments to multi-national corporations and unaccountable international bureaucrats at the World Trade Organization, or WTO. Incredibly, it also would transfer judicial powers from our federal and state courts — which are bad enough — to globalist TPP judges at regional tribunals and the WTO. It would also confer huge advantages on foreign businesses and large multinationals, while at the same time putting companies that operate here in America — especially small and medium-sized enterprises — at a competitive disadvantage. American businesses would remain shackled by the regulations of EPA, FDA, OSHA, etc. while their foreign competitors could operate here unimpeded by those same strictures.

Like the infamous NAFTA trade agreement passed in the ’90s, the TPP would usher in another wave of outsourcing, as the remaining manufacturing and technology bases would be given incentives to move to Pacific Rim countries, resulting in millions more American job losses. [emphasis added]

Hm. That doesn’t sound very good for the average American, does it? The elite behind it, however, who are pushing us all toward a New World Order, are rubbing their grimy little hands (hooves) together with glee at this.

By the way, it was crafted by these megacorporations and their lobbyists and interests in secret. The text wasn’t even allowed to be read by anyone (including Congress) until WikiLeaks leaked it all back in January 2014. Surely it’s been amended since.

Jasper also talks about how this is essentially working toward, what else? Global “governance” through a breakdown of control into “regional governance”:

The TPP and TTIP should be of special concern to Americans, since, as we shall detail presently, the authors and promoters of these agreements admit that they deal with far more than trade and have been designed to drag the United States into “regional governance” on a host of issues. The architects of the TPP and TTIP are virtually unanimous in their head-over-heels praise of, and support for, the political and economic merger taking place in the European Union (EU). The once-sovereign nations of Europe have been tricked, bribed, and browbeaten into yielding control over almost every aspect of their lives to globalist banking and corporate elites and their bureaucratic servitors in Brussels.

Just for icing on the crap cake that is this trade agreement, here’s a video from the Electronic Frontier Foundation about how the TPP is the “biggest threat to the Internet you’ve probably never heard of.”

The TPP is just more corporatist, globalist b.s. that will hasten our nation’s demise. Period.

Then again, that’s what free trade agreements have traditionally been. They are anything but “free” — more like sweetheart crony capitalist deals for select megacorporations (you know, the ones that essentially own all of our politicians in this country) under the guise of foreign policy which will further screw America over in a multitude of ways including killing even more of our jobs and widening the wealth gap even more.

In breaking down the specifics of the TPP’s dangers, Aaron Dykes over at Truthstream Media sums up these globalization tools well:

Globalization agreements, including the likes of GATT, WTO, NAFTA, CAFTA and other multilateral treaties, establish more than just trade between nations. Their deconstruction of trade barriers and tariffs are touted for creating cheaper goods, but often criticized for hurting farmers, small businesses, home-based industries, environmental factors and workers.

And the list, as it usually does, goes on and on.

SO THEN, if Rand Paul is really so pro freedom and national sovereignty as he claims, WHY then is he seen here giving a speech just a few months ago urging Obama to prioritize the TPP by the year’s end?

That last question is rhetorical. There’s only one clear cut answer and I already know what it is.

But I’m not the only one. More people are catching on that this whole federal election game is totally rigged and no one even gets into the game unless they are selected. Because our presidents are all selected these days, not elected. Voting is just a stage show to make the American public (read: plebs) feel included when they cast a ballot between two false choices which will inevitably keep the oligarchy status quo as usual.

It was bad enough when Rand was just paling around with George P. Bush and going to secret powerbroker meetings with “Bush’s Brain” Karl Rove up on Mackinac Island… but this?

It’s treasonous. I wonder what his dad thinks.

Rand’s brand of fake tea party libertarian lite only fools people who are half asleep or are so desperate for hope and change they will lie to themselves. Hope and change didn’t work so well last time, did it? Well, it’s all fake “hope and change,” every four years. Stop buying it. Only people who don’t vote, as George Carlin would say, have a right to complain here.

Please wake up. We can’t vote our way out of this, America. The country is too far gone.