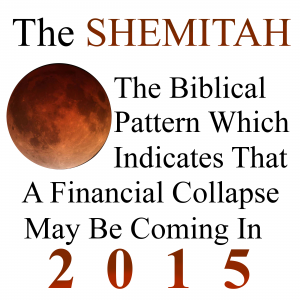 Does a mystery that is 3,500 years old hold the key to what is going to happen to global financial markets in 2015?  Could it be possible that the timing of major financial crashes is not just a matter of coincidence?  In previous articles on my website, I have discussed some of the major economic and financial cycle theories and their proponents.  For example, in an article entitled “If Economic Cycle Theorists Are Correct, 2015 To 2020 Will Be Pure Hell For The United States“, I examined a number of economic cycle theories that seem to indicate that the second half of this decade is going to be a nightmare economically.  But the cycle that I am going to discuss in this article is a lot more controversial than any of those.  In his most recent book, Jonathan Cahn has demonstrated that almost all of the major financial crashes in U.S. history are very closely tied to a seven year pattern that we find in the Bible known as “the Shemitah”.  Since that book was released, I have been asked about this repeatedly during radio appearances.  So in this article I am going to attempt to explain what the Shemitah is, and what this Biblical pattern seems to indicate may happen in 2015.  If you are an atheist, an agnostic, or are generally skeptical by nature, this article might prove quite challenging for you.  I would ask that you withhold judgment until you have examined the evidence.  When I first heard about these things, I had to go verify the facts for myself, because they are truly extraordinary.

So precisely what is “the Shemitah”?

In the Bible, the people of Israel were commanded to let the land lie fallow every seven years.  There would be no sowing and no reaping, and this is something that God took very seriously.  In fact, the failure to observe these Sabbath years was one of the main reasons cited in the Scriptures for why the Jewish people were exiled to Babylon in 586 BC.

But there was more to the Shemitah year than just letting the land lie fallow.

On the last day of the Shemitah year, the people of Israel were instructed to perform a releasing of debts.  We find the following in Deuteronomy chapter 15…

At the end of every seven years you shall grant a relinquishing of debts. This is the manner of the relinquishing: Every creditor that has loaned anything to his neighbor shall relinquish it. He shall not exact it of his neighbor, or of his brother, because it is called the Lord’s relinquishment.

This happened at the end of every seven years on Elul 29 – the day right before Rosh Hashanah on the Biblical calendar.

So what does this have to do with us today?

Well, if you go back to the last day of the Shemitah year in 2001, you will find that there was an absolutely horrifying stock market crash.

On September 17th, 2001 (which was Elul 29 on the Jewish calendar), we witnessed the greatest one day stock market crash in U.S. history up to that time.  The Dow fell an astounding 684 points, and it was a record that held for precisely seven years until the end of the next Shemitah year.

At the end of the next Shemitah year in 2008, another horrifying stock market crash took place.  On September 29th, 2008 the Dow plummeted 777 points, which still today remains the greatest one day stock market crash of all time.  It turns out that September 29th, 2008 corresponded with Elul 29 on the Jewish calendar – the precise day when the Bible calls for a releasing of debts.

So on the very last day of the last two Shemitah years, the stock market crashed so badly that it set a brand new all-time record.

And now we are in another Shemitah year.  It began last fall, and it will end next September.

Could it be possible that we will see another historic market crash?

Author Jonathan Cahn has correctly pointed out that we should never put God in a box.  Just because something has happened in the past does not mean that it will happen again.  But we should not rule anything out either.

Perhaps God is using His calendar to make a point.  Cahn believes that if we are going to see something happen, it will probably occur as the Shemitah year comes to an end…

Cahn has pointed that, according to his research, the worst of the worst usually happens at the end of the Shemitah year, not at the beginning. In fact, the last day of the year, Elul 29 on the Hebrew calendar, which will occur on Sept. 13, 2015, is the most dreaded day.

The pattern revealed in “The Mystery of the Shemitah” is that the beginning of the Shemitah’s impact is often subtle, but leads to a dramatic climax.

“The beginning may mark a change in direction, even a foreshadow of what will come to a crescendo at the Shemitah’s end,” he said.

And this time around, far more people are paying attention.  Back in 2001 and 2008, most Americans had absolutely no idea what a “Shemitah year” was.  But now it is being talked about on some of the most prominent alternative news websites on the Internet.  For example, the following is what Joseph Farah of WND has to say about the Shemitah year…

Farah believes the date Sept. 13, 2015 bears close watching – though he is quick to admit he has no idea what, if anything, will happen in America.

“A clear pattern has been established,” he says. “I don’t believe it’s a coincidence what happened in America on Elul 29 in 2001 and 2008. It would be foolish to ignore the possibility that a greater judgment might be in the works – especially if America continues to move away from God and His Word.”

The Shemitah year that we are in now does end on September 13th, 2015 – and that falls on a Sunday so the markets will be closed.

But when it comes to the Shemitah, we aren’t just looking at one particular day.

And it is very interesting to note that there will also be a solar eclipse on September 13th, 2015.  Over the past century, there have only been two other times when a solar eclipse has corresponded with the end of a Shemitah year.  Those two times were in 1931 and 1987, and as Jonathan Cahn has told WND, those solar eclipses foreshadowed major financial disasters…

In 1931, a solar eclipse took place on Sept. 12 – the end of a “Shemitah” year. Eight days later, England abandoned the gold standard, setting off market crashes and bank failures around the world. It also ushered in the greatest monthlong stock market percentage crash in Wall Street history.

Is Cahn predicting doom and gloom on Sept. 13, 2015? He’s careful to avoid a prediction, saying, “In the past, this ushered in the worst collapses in Wall Street history. What will it bring this time? Again, as before, the phenomenon does not have to manifest at the next convergence. But, at the same time, and again, it is wise to take note.”

So what is going to happen this time?

We will just have to wait and see.

But without a doubt so many of the same patterns that we witnessed just prior to the financial crash of 2008 are happening again right before our very eyes.

It has been said that those that do not learn from history are doomed to repeat it.

Perhaps you believe that there is something to “the Shemitah”, or perhaps you think that it is all a bunch of nonsense.

But at least now you know what everyone is talking about.  What you choose to do with this information is up to you.